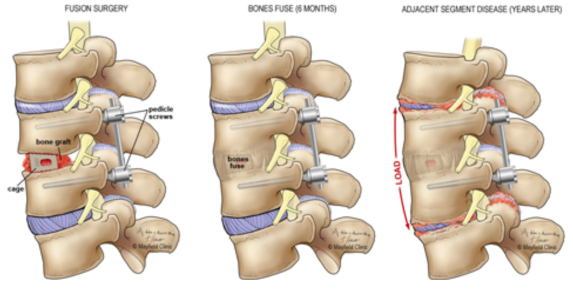 No matter what type of spine surgery I discuss with patients, the most frequent question is, “If I get surgery now, won’t I just keep needing more surgery for the rest of my life?”

The answer is possibly “yes”, but not why most patients think…

The first concept needing belaboring is that disc degeneration is not synonymous with pain or symptoms.  We’ve written many blogs on this topic.  Although the spinal disc is the scapegoat for much of society’s aches and pains and is the reason many providers order imaging or offer treatment, the role of disc/ bone spurs/ joints causing pain is unclear.  But one thing we know for sure, a ton of people have a degenerative or arthritic-looking spine, and many of those people have no symptoms!

However, what causes disc generation?  For a while, several environmental factors have been discussed, especially since they’re modifiable.  Weight gain, tobacco use, exposure to prolonged vehicular vibration, and heavy lifting are all probable components that can accelerate degeneration.  There’s no doubt they contribute to the problem, and fixing them surely won’t hurt.  However it appears that disc herniation and disc degeneration may be explained largely by genetic factors, and then natural aging.

For decades we’ve known that disc changes in the lumbar spine are present not only in ~15% of 20-year-olds and ~98% of 70-year-olds but even in 11-19-year-olds.  Turns out 3-10-year-olds have been found to have some changes in their endplate cartilage.  The likely only explanation for an “arthritic” change in a toddler is genetic.  There’s only so much wear and tear one can acquire in a playpen.

However, the rate of disc generation steadily increases with age, suggesting that the onset may be genetic, but the progression is likely just a part of life.  The only things you can guarantee aren’t just “death and taxes”, but spine degeneration too.  Our bodies were just not meant to live as long as they do, and the physiologic loads placed across the spine engaging in normal life lead to degeneration.  We can transplant your heart, kidneys, lungs, liver, or cornea.  No matter how much McDonald’s you want to clog in your arteries, we can always increase your hypertension medication to keep you below 160 mmHg or increase your cholesterol med to make the numbers nice.  However, even in 2022, we can’t stop your arthritis or give you a new spine.

Since the advent of cervical and lumbar fusion, a lot of laypersons and scientists alike have presumed that immobilizing a spinal segment must accelerate degeneration above and below.  It just makes sense.  Biomechanical models show increased stresses in the transition zones around a fusion.  However, you have a human body and not a biomechanical model.  And it doesn’t really mean anything if there are increased forces on the discs above your fusion if that doesn’t lead to symptoms or require you to have any more surgery.  Despite this, artificial cervical and lumbar discs were created in the 2000s and sold largely on preservation of motion which should limit adjacent level disease. 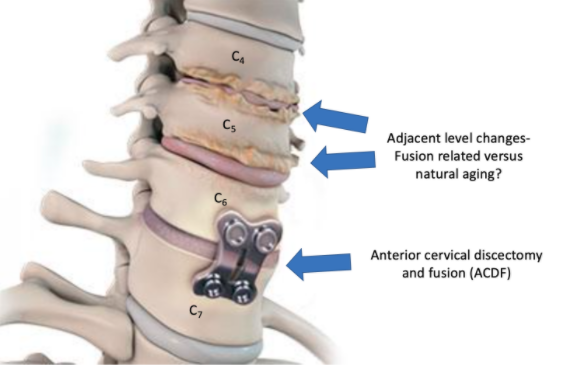 This is one of the first studies to show that despite the preserved range of motion, the adjacent level disease was not avoided.  Degenerative changes that may have required the initial operation often continue to progress after surgery.  If you decide to pursue spine procedure, unless you move into a bubble, there’s a chance you’ll progress at the adjacent level(s) and may need it fixed.  Blame your parents for that, not necessarily the fusion.  Of course, it also appears if you don’t get that surgery, other spine levels may continue to degenerate regardless.  You just can’t beat Father Time.