Aren’t You Going to do an X-ray Today?

Wilhelm Conrad Roentgen discovered X-rays in November 1895 at the University of Wuzberg. While playing with a cathode tube containing a small window, some electromagnetic rays escaped. (Kind of reminiscent of the days when kids would play with mercury from a broken thermometer?) He covered the tube with black cardboard, but fluorescent screens captured the beams. Shortly, he noticed that the beams passing through opaque objects affected the film beneath, leaving a shadowy picture. The first radiograph of a human was his wife’s hand on December 22, 1895. Because he did not know the physical nature of the electromagnetic beans, Roentgen called them “x-rays”. In 1901, Roentgen received the first Nobel Prize in physics.

After the first publication that same December 1895, word traveled lightning-speed around the globe. Carnivals employed them as novelties at fairs. Shoe stores used them to measure the size of feet. What cute little gamma waves…

In America, Emil Grubbe was a Chicago chemist and homeopathic physician. He also ran a small electric light bulb company and wanted to expand the business to manufacture other products. While combing through scientific journals for ideas, he saw drawings of Roentgen’s apparatus, reproduced the device and started experimenting. Every day for two weeks, he took numerous x-rays of his hands. Of course, no one knew about overexposure at this time… no one knew exactly what were x-rays! Shortly after, Grubbe developed severe burns on the back of his hands.

Grubbe’s left hand eventually was amputated in 1929 and he underwent many disfiguring surgeries for multiple skin cancers. He died in 1960 as the result of squamous carcinoma with metastasis. Serendipitously, his skin injury inspired him to consider directing x-rays towards tumors, which eventually led to radiation therapy for cancer. Radiation is a paradox…. on one hand, it’s lifesaving, and on the other it’s deadly. To one person it can cure their cancer, but to another, it can cause their cancer.

Radiation exposure from medical imaging is now well known. Ionizing radiation from x-rays can damage DNA, and although cells can repair much of it, they sometimes do so imperfectly. The resultant DNA mutations may contribute to cancer years down the road.

We’re all exposed to some radiation, just living on the planet. Cosmic radiation from the sun and radon produces about 3 millisieverts (mSv) per year. (A mSv is a measure of radiation exposure). However, since 1980, the average American’s yearly radiation has nearly doubled, primarily due to medical imaging.

Most of what we know about the cancer risk of ionizing radiation comes from survivors of the atomic bombs in Hiroshima and Nagasaki. Now, this isn’t a perfect model because an atomic blast releases radiation all at once, while medical imaging exposes patients to smaller doses over time. Studies show a sight increased risk of cancer in those who received less than 50 mSv of radiation from the blasts. In comparison, the average dose of radiation from a lumbar x-ray is about 1.5 mSv. 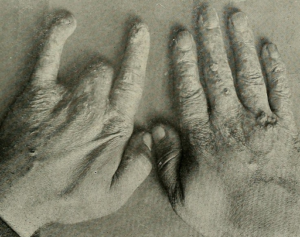 In spine fusion surgery, one of the goals is to “fuse” the spine, or have the bones grow together. This can occur over the 6-12 months following the operation. Successful lumbar fusion correlates with improved function and decreased pain. Greater than 86% of patients with solid fusion have excellent long-term outcomes compared to 56% with pseudoarthrosis (non-fusion). If screw loosening is identified early, which may predict a failing fusion, surgical management can intercede to avoid significant screw loosening and destruction of the spine bones. For this reason, historically some surgeons have offered x-rays at some (or all) of postoperative visits. Hence, the most common question posed by my post-fusion patient is, “Aren’t you going to do an x-ray today?”

It should be noted too, however, that some physicians in every community around America have supplemented their incomes with profits from in-office laboratories, x-rays, and other medical services. Historically, physicians could earn 25%-100% per year on an investment of $5,000 to $100,000. That results in an annualized return of about 80% after two years of operation. This incentive to x-ray one’s spine fusion patient, with one’s own x-ray machine, is high. US law strictly forbids physicians from self-referring to their own ventures, but only on Medicare and Medicaid. Commercial insurances are exempt and maybe a “treasure trove”. 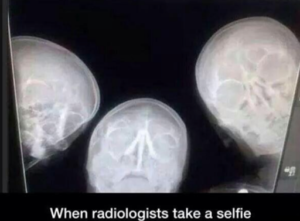 Turns out that routine radiographs are not needed in cervical or lumbar spine fusion patients. 99% of films taken before the 6-month follow-up provide no useful treatment information. Standard x-ray is somewhat unreliable when used to evaluated screw placement or document fusion, with CT being much more definitive in the first year. (After 12 months, a plain x-ray may show fusion). In many studies, radiographic findings do no prompt additional action or change in care. And from an economic standpoint, routine imaging drastically increases health expenditure.

Conventional x-ray likely should only be considered in patients with new symptoms of clinical deterioration. If normal, reassurance could be offered. If abnormal, CT or MRI may delineate any problem.

If you come to me for your spinal fusion, you won’t be offered a routine x-ray at every postoperative visit. I want my patients to glow, figuratively from the surgical result, and not literally from radiation.