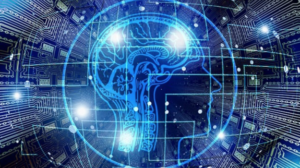 Artificial intelligence (AI) is a broad term that describes any task performed by a computer than normally requires human intelligence. Machine learning is a type of AI in which computers learn from existing data, without explicit programming, to predict new data points. Deep learning is a subfield of this, which deals with especially messy data sets and unstructured piles of information, to try to give answers to difficult questions. AI, and machine learning, are rapidly integrating into all aspects of human life. In medicine, which is historically thought to best be performed with a human approach, AI has many useful applications already. AI, but not machine learning or deep learning, is currently appearing in neurosurgery.

Probably the most commonly used AI in spine surgery is robotic screw placement. Using a patient’s CT scan at the beginning of a surgery, the robot uses computational algorithms to place screws in the spine. The trajectory is determined by the surgeon based on the initial CT, but it is the robot that actually places the screw. While this seems to be most useful in scoliosis or revision spine surgery, some surgeons are using robots to place faster and potentially more accurate screws in most of their patients. We’ve previously written a blog on robots in spine surgery, and our hesitancy to use this technology. We’ve highlighted the limitation of the robot’s fixed algorithm based on a CT that does not adjust as the surgery progresses. There is no machine or deep learning, because the robot is incapable of making new predictions of new data points. Therefore as the spine literally moves due to physical manipulation in surgery, the computer’s algorithm quickly becomes outdated and incorrect, and the screws can unintentionally wind up in undesirable places. Once future prototypes of the spine robot incorporates machine learning, we would be much more excited to routinely use this tool.

AI in brain surgery has largely remained out of the clinical realm thus far, and is primarily described in research scenarios. It’s difficult to imagine a computational algorithm allowing a robot to partake in any step of a brain tumor or vascular lesion resection. As soon as the skull is removed and dural coverings are opened, the pulsatile brain, sometimes under tremendous pressure, immediately starts moving to equalize intracranial and atmospheric pressure. As soon as the brain tissue is entered, structures are manipulated, cerebrospinal fluid is drained, some blood is removed, and the surgical target may have slightly changed location and/or shape. Resecting a tumor or treating a vascular lesion involves real-time adjustments based on haptic feedback of the tissue, visual interpretation of color and consistency, and human intuition. Surgeons want to avoid removing any more brain tissue than needed, so an operational AI model involving real human patients is not conceivable at this time. However, the two aspects of neurosurgical care amenable to AI are: 1) radiological interpretation, and 2) pathological interpretation.

Applications of AI in Neuro-oncology Imaging 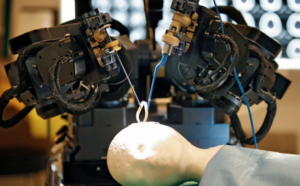 Traditional radiology relies on a human visually assessing brain images in subjective and qualitative terms. Using training and experience from a relatively confined data set, they interpret normal versus abnormal findings. AI has the potential to extract more information from the images, potentially delineating very subtle features better than humans. A computer can access a much larger database of information than any human, and can process many more features within an individual brain scan to potentially make a more accurate diagnosis faster. While this is not been widely available yet, a German research group has developed algorithms that are able to automatically recognize the localize brain tumors using artificial networks. They were able to improve scan interpretation reliability by 36% compared to human radiologists.

Radiomics is another aspect of AI, which has broader potential. Radiomics extracts many different quantitative imaging biomarkers which may predict diagnosis, tumor classification, prognosis, and treatment response. It may stratify patients into tailored treatments predicted to be most effective, including determining whether a patient would benefit more or less surgical resection, or adjuvant therapies. This all could be accomplished from just an initial brain scan.

Applications of AI in Intraoperative Neuropathology

Surgeons resect brain tumors ideally just to their edge. Taking even a little extra brain tissue could result in serious neurologic deficits. Current available tools are: 1) computerized navigation which estimates the tumor’s edge based on the preoperative imaging, and 2) the surgeon’s visualization of normal brain based on touch and visual features. The problem with computerized navigation is the same as with robotic spine surgery… there is no machine learning. The brain tissue moves and so the static GPS map becomes inaccurate as the surgery progresses. The problem with the surgeon’s sensory analysis is that some tumors’ borders feel and look very much like a normal brain to the naked eye even under microscopicmagnification. 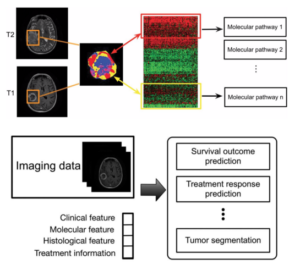 A new AI computational algorithm allows surgeons to have a quick and accurate tissue sample diagnosis in the operating room. If the surgeon thinks they are at the tumor’s border they can submit a small sample for optical imaging. A computer can quickly analyze it in about 90 seconds to diagnose tumorous tissue with about 94.6% accuracy. Historically, human pathologists take at least 30 minutes to give a rough estimate with about 93.9% accuracy. This AI model may allow surgeons to see what would otherwise be invisible and have better confidence in knowing the edge of an ill-defined tumor margin. This technology is only currently available at select academic centers, but may become most useful in community-based hospitals who may lack a neuropathologist on site.

In summary, AI is new to neurosurgery, but still lacks machine learning, which is the crucial next step to make realistic advancements. The idea of a computer being trained to, or being self-sufficient to, learn how to perform spine or brain surgery is daunting. We tend to buy-in, or be scared of, any hype surrounding new and potentially disruptive technology in medicine. We think that AI is going to either save us or replace us as healthcare providers. In actuality, we have had a human-machine cybernetic collaboration in surgery for a long time, and it’s been a good thing. Most of us cannot imagine the times when nurses palpated a patient’s wrist pulse through an entire surgery, and assume computer-based heart rate monitors are have always been present. Cybernetics is essentially how humans work within complex systems to achieve a goal. AI, machine learning, and deep learning are necessary and evolutionary steps in the progress of medicine. Embracing this technology will allow us to best treat our patients and its future role in neurosurgery is exciting.