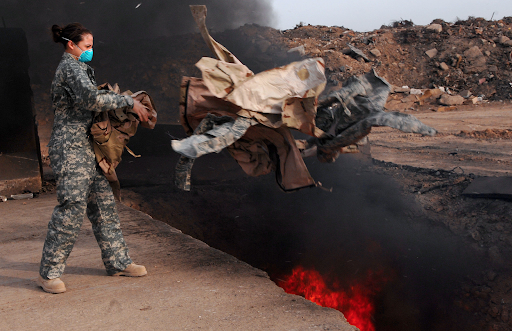 This last week during Joe Biden’s State of the Union address, he made comments on military “burn pits” and a possible association with cancer.

“Our troops in Iraq and Afghanistan faced many dangers. One being stationed at bases breathing in toxic smoke from burn pits… I’m also calling on Congress to pass a law to make sure veterans devastated by toxic exposure in Iraq and Afghanistan finally get the benefits and the comprehensive health care…. They come home many of the fittest and best-trained warriors in the world, never the same. Headaches, numbness, dizziness, a cancer that would put them in a flag-draped coffin. One of those soldiers was my son, Major Beau Biden. I don’t know for sure if the burn pit that he lived there, that his hooch was there in Iraq, and before that Kosovo, is the cause of his brain cancer…”

Biden has been making similar comments since 2015 when his son died from a glioblastoma multiforme (GBM).

“Burn pits” are areas devoted to the open-air, uncontrolled, combustion of trash. Materials burned in these pits include chemicals, paint, medical and human waste, metal/ aluminum cans, munitions, plastics and Styrofoam, rubber, wood, and discarded food. Some of the waste burned in these pits could give rise to toxic smoke-containing substances with potential cause for long and short-term health problems.

However, the VA suggests there is currently insufficient research to demonstrate any long-term health problems linked to “burn pits”. A 2011 National Academies of Sciences, Engineering and Medicine published a consensus study finding no link between brain cancer and exposure. Since that study, no comprehensive data definitively suggests, one way or the other, a link. Much of the research on “burn pits” focuses on respiratory and cardiovascular sequela.

In looking at overall brain cancer statistics in our military, veterans may show a higher prevalence than the general population. Furthermore, the average onset generally is in 60-year-olds amongst civilians, compared to the military personnel in their 30’s. However in comparing military either exposed (predominately after 2001) to “burn pits” to those not exposed, there seems to be equal rates of brain tumors. No data suggests Iraq veterans developed brain cancer at any higher rate than those in earlier wars. Brain cancer prevalence was ~ 0.04% for Vietnam veterans and 0.03% for Gulf War veterans who served in Iraq and Afghanistan. Now this data would exclude any military who died prior to the studies or who obtained health care outside of the VA. Only about ½ of all veterans use the VA for their healthcare.

The 2011 committee suggests that long-term health effects might be more generally associated with service in Iraq and Afghanistan, rather than “burn pit” exposure, because of high levels of particulate air pollution on bases as a result of military activities and natural dust storms. They further support this with other epidemiologic studies involving firefights and incineration workers, who also may have similar inhalation exposure. The largest cohort studies were negative in relation to brain tumors.

Brain cancer is a challenging disease to study since it is so rare. While GBM is the most common form of brain cancer, it comprises only about 1% of new cancer cases per year in the United States. There are a few identifiable genetic risk factors, which are inherited predisposition syndromes, but these do not explain most brain tumors. High dose ionizing radiation to the head (like Chernobyl) is a known to cause cancer, but few people experience this type of exposure. Most brain cancer is thought to occur from spontaneous genetic alterations.

Another consideration in linking inhalation exposure to brain cancer, is the widespread failure of current medical treatments for GBMs. If a “burn pit” were to induce the DNA change instigating a high grade glioma, then the toxin(s) would need to enter the blood stream from the respiratory system and penetrate the brain cells. However our brains have a protective mechanism against this, called the blood-brain-barrier (BBB). Even when we want chemicals to penetrate the brain, like chemotherapy, the BBB is the greatest obstacle. Many oncolytic regimens fail because drugs in the bloodstream are blocked from the brain.

In the end, “burn pits” probably aren’t safe. However at this point, we have no link between “burn pits” and brain cancer. While absence of evidence is not the evidence of absence, we need to find direct linkages before being conclusive. The government is performing additional studies. A nonprofit veteran group called, Burn Pit 360 is also setting up voluntary registries to report health complaints from “burn pits”.