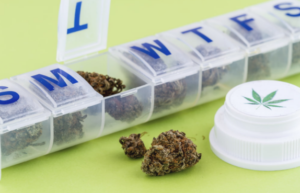 Opioids and muscle relaxants have typically been used to treat spine pain. However, in the awareness of the opioid epidemic, medical marijuana has grown popular.

According to the January 2020 data from Colorado’s medical marijuana registry, 30,000 Coloradans reported use for “muscle spasms” and 76,000 reported use for “severe pain”. These are the two most common conditions listed. The majority of users are in their early 40’s.

In 2012, a University of Colorado survey of 184 spine patients indicated that 20% used cannabis to relieve their pain. Of those, 85% said cannabis gave them at least moderate pain relief and 77% said the relief was equal to or better than what they achieved with opioids. This study did not assess if cannabis use altered the use of opiates or muscle relaxants. A 2017 study at the University of Colorado Spine Center is currently underway evaluating vaporized cannabis versus Oxycodone in alleviating short-term back and neck pain. The completion date is estimated to be December 2020. This may be less of a questionnaire study and provide a more objective analysis.

The purported benefits of medical marijuana for spine pain are:

1. Marijuana may help to reduce or eliminate pain, allowing more patient activity. This is an interesting notion since cannabis use is primarily associated with inactivity. The odds of spending >35 hours per week of sedentary behavior are 80% higher for cannabis users versus never-users. Some research may suggest that cannabis use just prior to exercise can result in increased aerobic activity and enjoyment of exercise. However few users are concurrently using cannabis just before or after exercise, and those people tend to be in their 20’s. Cannabis has never been shown to motivate anyone for activity. You will not find anyone crossing the line of an Iron Man smoking a joint.

2. Cannabis may allow users to eliminate the use of potentially addictive medications and their resulting side effects. Of interest, the most commonly used strains in pain management are known for high levels of THC (about 24%), allowing an intense euphoric high. These are the more psychoactive strains on the market, and have low amounts of CBD. According to the National Institutes of Health, marijuana is an addictive drug itself, with dependence and withdrawal. Therefore, aren’t we just replacing one drug with another?

Opiates and cannabinoids use overlapping signaling systems in the body having to do with drug tolerance, pain, and dependence. However, marijuana may have an independent analgesic capability that is augmented in the presence of an opioid. Accordingly, controlled trials have found that patients with chronic pain, who use marijuana, tend to use more prescription opioids and at higher doses. Marijuana users are also much more likely to develop opioid use disorder.

Marijuana arrests and treatment admission to rehab facilities are higher in legalized medical marijuana states compared to non-legalized medical marijuana states. In 2013, Colorado became the first state to legalize recreational marijuana, but we also have the 12th highest consumption rate of illegal drugs. Since 2012, admission to drug addiction facilities has tripled (opiates are the most common). Colorado has the highest rate of deaths by illicit drug overdose than any other state in the US. Colorado is the only state with heavy consumption for the four major intoxicants, including marijuana, alcohol, cocaine, and opioids.

Marijuana-related car accidents have spiked in Colorado. Between 2013 and 2018, fatal car crashes involving cannabis increased by more than 150%. On average, one Colorado resident dies in a drugged-driving accident every two days.

The legalization of medical and recreational marijuana has drastically increased the illegal sales in Colorado. Currently, dealers must possess a license to sell medical or recreational marijuana, but many dealers abstain from licensure to avoid taxes. Since legalization, more than 7 tons of illegal plants have been seized. The United States Postal Service confiscates 38% more illegal packages than they did 5 years ago.

3. Marijuana may help combat side effects that result from back pain, including anxiety, depression, and insomnia. In actuality, THC appears to decrease anxiety at lower doses (7.5 mg) and increase anxiety at higher doses (12.5 mg). CBD may decrease anxiety at all doses. Using marijuana to cope with anxiety or depression may offer some short-term benefits, but well-controlled studies indicate cannabis use is associated with an increased likelihood of substance use disorder. According to the Colorado Department of Public Health, neither anxiety, depression nor insomnia is listed as qualifying medical conditions for a medical marijuana card. Why would be advertising a side effect of marijuana that is not a known indication for its medicinal use?

Therefore, cannabis as a substitute for opiates in acute or chronic pain management is often misrepresented by non-medical sources. The clinical studies actually performed are small and lack generalizable data.

Cannabinoids have not been studied as an alternative to opiates after spine surgery, but they have been studied for prostate surgery, dental surgery, hysterectomy and trauma surgery. The addition of THC does not seem to improve pain control after surgery, but over 50% of patients experience side effects.

The two realms where cannabinoids may be beneficial for pain control are in neuropathic pain and inflammatory pain. Inhaled cannabis has been found to improve pain in the setting of multiple sclerosis, HIV neuropathy, diabetic neuropathy, spinal cord injury, peripheral nerve injury, and complex pain syndromes. However opiates tend not to be useful in any of these conditions anyway, so cannabis would not be considered a substitute. And the side effects of sedation, confusion or psychosis may outweigh the pain-relieving benefit. The mechanism of pain relief on neuropathic pain is not completed understood, although CBD, topically and orally, has been shown to inhibit joint inflammation in rheumatoid arthritis and other rheumatologic diseases. It is also hypothesized that cannabis may change the cognitive processing of chronic pain status.

Cannabinoid medications at the present time have FDA limitations. The only FDA-approved medications are dronabinol (Marinol), nabilone (Cesamet), and CBD (Epidiolex). All other cannabinoid-based therapies are not FDA approved and there are no standards for quality control, dosing, monitoring, or reporting of adverse events. There are no guidelines for harvesting, processing or packaging medical marijuana.

The long-term effects of cannabis smoke on the lungs are unclear, but studies comparing marijuana to cigarette smoke suggest marijuana leaves higher levels of carboxyhemoglobin in the blood and tar in the lungs. Marijuana has been linked to the development of tumors.

We have written other blogs on the deleterious structural and functional brain changes associated with cannabis. There are links between cannabis use and psychotic symptoms. Cannabis users have slowed learning, attention, reaction time, and memory, and these effects do not immediately reverse after cannabis cessation.

There is a known placebo effect with other psychedelic drugs, so the true benefit of any illicit substance to treat physiologic diseases may be overestimated. In the right context, participants being studied on the effect of psychedelic mushrooms in controlling their depression showed that 61% reported some effect after consuming a placebo. They started “tripping on nothing”, when placed in a room resembling a psychedelic party with paintings, colored lights, a DJ and research assistants in white lab coats. All 33 participants were told they were being given mushrooms but everyone consumed the placebo. The generalizability of this study may not only explain, “contact highs”, but call to question if illicit drugs possess any medical benefit. Maybe research for opiate substitutions should focus more on placebos than illicit drugs with known physiologic and societal harm.

Overall, the use of cannabinoids in spine pain management is very controversial, with many concerning observations. Cannabis may help alleviate pain, but don’t expect opiate use or side effects to also diminish. Numerous other detrimental side effects of cannabis use exist, which are prominent in Colorado but rarely broadcast by our government or media. At the present time, we do not recommend substituting cannabis for pain management.