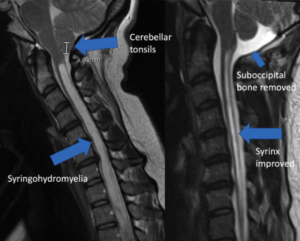 Chiari I malformation is a complex brain disorder, which is still poorly understood and controversial. There are numerous types of Chiari, however Chiari I is most commonly found in kids and young adults.

Many people haven’t heard of Chiari I, although nearly 1 in 1,000 may have the diagnosis.  In comparison, multiple sclerosis (MS) affects up to 0.93 per 1,000 people, so a very similar prevalence, yet more notoriety within the general public.  Part of Chiari I’s invisibility may have to do with the majority afflicted being asymptomatic.  Johnny Cash’s daughter, Rosanne Cash, may be the most notable affected celebrity.

It’s most established as a “radiographic” finding, which means Chiari is diagnosed on MRI imaging.  Part of the cerebellum, called the cerebellar tonsils, extend too far out the base of the skull.  The vault holding the cerebellum and tonsils often is relatively small.

Of interest, the cerebellum itself is a mystery.  Cerebellum is Latin for, “little brain”, which would imply significance.  It seems to play a role in coordination of movement, however there are case reports of people born completely without a cerebellum, yet no symptoms.

The cause of Chiari I is thought to be congenital, meaning people are born with it.  However, which is the chicken and which is the egg?  Did the space for the cerebellum start off abnormally small, leading to the tonsils being pushed down?  Or were the cerebellar tonsils embryologically malpositioned, leading to a smaller cavity encasing them later?  Regardless, as people age the tonsils can descend further down and even cause fluid build-up in the spinal cord called syringohydromyelia, or a syrinx.  Paradoxically, even though these patients have small compartments confining their herniated cerebellum, their overall head size is often bigger.

The Chiari malformation is thought to impair cerebrospinal fluid (CSF) flow, potentially leading to a multitude of symptoms.  The most common may be pain in the back of the head, called a suboccipital headache, however many people have headaches and therefore attributing this, or any symptoms, to the Chiari is difficult.  Symptoms can be quite nonspecific and vague, going undiagnosed for years.

The treatment for Chiari often involves removing the suboccipital bone, and sometimes the C1 lamina.  The dura overlying the cerebellar tissue is opened and some sort of graft may be sutured in place.  This creates a larger space for the cerebellum and tonsils, allowing improved CSF flow.  Sometimes symptoms improve, but not always.  Surgery is not indicated for everyone with radiographic Chiari I.  Usually it is reserved for patients with a syrinx, or debilitating symptoms when CSF flow is proven to be impaired.  A CSF flow study, called a CINE flow study, may show obstructed flow, although this still does not prove a person’s symptoms are being caused by the Chiari.  Many people will have a Chiari I radiographically, but without any associated symptoms, or with symptoms completely unrelated to the Chiari.  What a confusing condition…

Considering Chiari I is thought to originate before birth, and there may be increased risk within families, it’s logical there could be a genetic basis.  However no one has previously isolated the problematic gene. A recent article in the American Journal of Human Genetics may have found a mutation.  A set of chromodomain genes, specifically CHD3 and CHD8, may be strongly associated with developing Chiari I.  Chromodomain genes have a wide scope of activity and regulate many parts of DNA during embryogenesis, though a protein called chromatin.  CHD8 has previously been found in other animals to affect brain size.  Since chromatin remodeling is crucial for brain development, other chromodomain genes have been associated with various neurodevelopmental disorders in humans.  Additional CHD genes may also contribute to Chiari I.  This mutation may start spontaneously in a patient, termed de novo, or maybe transmitted through carrier parents.

CHD genes have also been associated with a condition called macrocephaly, in which the head circumference is greater than 2 standard deviations above the mean.  This therefore helps explain why Chiari I patients tend to have head circumferences to the right on the growth chart.  However it also may explain the overall riddle… it may be that Chiari I brains grow faster than their skulls (overactive neurogenesis), leading both to an enlarged skull, but also herniation of the tonsils.

The identification of a Chiari I gene helps us understand the disorder.  However its role in treatment is unclear since we tend not to operate prophylactically on all patients, and the gene mutation is likely present in those with and without symptoms.