Columbus May Not Have Discovered a New World, but a New Type of Arthritis Affecting the Spine 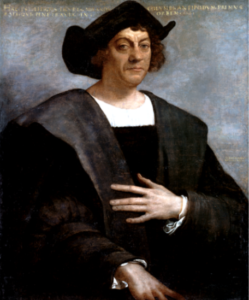 On August 03, 1492, Christopher Columbus set sail on his maiden voyage with the Nina, Pinta and Santa Maria to find the Northwest Passage and reach Asia from Europe by water. Columbus’ logic to sail west across the Atlantic instead of around Africa was reasonable, however his math was faulty in that he grossly underestimated the circumference of the Earth. On October 12, 1492, the ships likely landed in the Bahamian island of San Salvador, instead of the intended East Indies. For this reason, we now celebrate Columbus, or Indigenous People’s, Day, considering it’s accepted that Columbus didn’t really discover a New World.

By January 1493, Columbus left Haiti and the Dominican Republic to head back to Spain. He had three more voyages to the Americas, returning in September 1493, May 1498 and 1502.

However on the return voyage from his first trip in 1492, Columbus suffered disabling and relapsing arthritis, primarily affecting his spine and legs. He also had eye problems, including bleeding from his eyes and temporary blindness. During the second voyage, he was so sick for about 5 months that his return to Spain was delayed in 1494. Columbus’ spine arthritis likely prevented further voyages and he eventually died bedridden, just before turning 55.

So what disease plagued Columbus? Hippocrates even described chronic joint arthritis without this degree of impairment. Many 15th century Europeans would have suffered spine pain.

Medical historians believe that Columbus and his crew brought back syphilis from the New World to the Old. There is no reference to syphilis in medical literature before Columbus (biblical texts more likely refer to gonorrhea). Considering the abundance of medical documentation by the Greek and Romans, syphilis would have been described if it had existed. Furthermore, syphilis swept through Europe in epidemic form following Columbus’ return. However Columbus’ arthritic and eye symptoms do not fit syphilis.

Many have thought Columbus may have suffered from gout, however this is also unlikely. Gout attacks tend to be triggered by alcohol and certain foods (red meats and seafood with high levels of uric acid), but Columbus was known to previously imbibe in both, without a history of these symptoms. Moreover, gout attacks usually last just over a week, and the durations of Columbus’ attacks were much longer.

Other’s historically diagnosed Columbus with rheumatic fever. Columbus was bedridden for months, which is far longer than the course of rheumatic fever too, which usually recovers in a few weeks. These patients also typically have early involvement in their hands, while Columbus was affected in his back and legs, with little hand involvement until later.

Some question scurvy, which was known to plague sailors. Scurvy occurs from vitamin C deficiency, but takes about 100 days to develop. Columbus’ voyages never lasted more than about 2 months. He unlikely was deficient enough in vitamin C to develop symptoms. 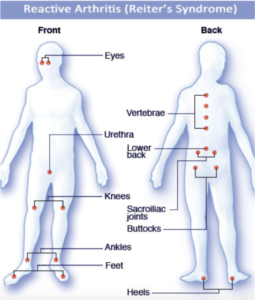 Columbus’ arthritis may best fit a rare disease called Reiter’s syndrome, which affects the joints and eyes. He may have displayed the first-ever case of Reiter’s. Reiter’s syndrome, now better known as “reactive arthritis”, was named after a World War I German military physician in 1916. It causes joint pain and swelling, often triggered by an infection from the GI tract or venereal origin. Considering Columbus and his crew acquired numerous intestinal infections from the New World, food poisoning on their ships, and may have encountered other STDs like syphilis, they had all the precursors for “Reiter’s”. However the Old World Europeans added to the mix a specific genetic predisposition, called HLA-B27, which the indigenous peoples of the Americas lacked. 80% of people with Reiter’s have the HLA-B27 gene, and this genetic framework is most common in people of Northern European descent. Columbus was Italian, and known to be tall with fair skin and blue eyes… all traits of HLA-B27 carriers. HLA-B27 is also a genetic signature of another related arthritic disease with inflammed bowels… ankylosis spondylitis. Ankylosis spondylitis is associated with autofusion of the spine, commonly leading to spine pain and even fractures. Mixing New World infection with Old World genes was the perfect recipe for Reiter’s.

Without treatment, Reiter’s disease, or “reactive arthritis”, can recover in 3-12 months. Thirty percent have relapse, and about 10% of patients have progressive disabling arthritis. In patients who manifest ankylosing spondylitis, patients are prone to fractures which can become disabling or lead to significant neurologic injury. 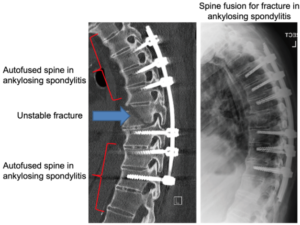 In Columbus’ case, he became so arthritic that he could no longer write or stand at the time of his death. There obviously was no immunologic therapy, like the TNF blockers we have today. Even simple steroids or NSAIDs can control symptoms. There would have been no neurosurgeons to surgically treat any potential spine fractures.

If Columbus had medications like Etanercept, he could have been symptom-free in about 24 hours. After uncomplicated spine surgery, he could have been cleared for casual recreational boating in about 3 months. Who knows how this first case of Reiter’s may have changed the history of New World exploration, for good or bad. But at least we can now, more affirmatively, attribute a “discovery” to Christopher Columbus.