“Come As You Are”… even with Scoliosis 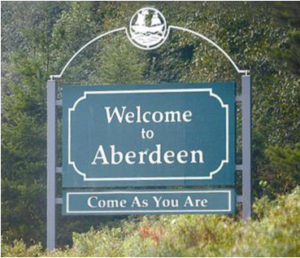 In November 1993, Kurt Cobain’s legendary band, Nirvana, recorded their performance MTV Unplugged in New York. It was released on November 01, 1994. “Come As You Are was the 2nd track. This year the album is getting a 25th-anniversary vinyl reissue.

While Nirvana formed in 1987, it was the 1991 album, Nevermind, which featured “Smells Like Teen Spirit” and “Come As You Are”, and catapulted the band into fame. However, fame is ephemeral, and Cobain’s suicide in 1994 led to the band’s breakup.

In leading up to Kurt Cobain’s death, he just escaped rehab in Los Angeles for heroin addiction. The media spoke much of Cobain’s chronic stomach problems as one impetus for his heroin abuse, however, less is mentioned of his scoliosis.

“My body is damaged from music in two ways. I have a red irritation in my stomach. It’s psychosomatic, caused by all the anger and the screaming. I have scoliosis, where the curvature of your spine is bent, and the weight of my guitar has made it worse. I’m always in pain, and that adds to the anger in our music.”

“I had minor scoliosis in junior high, and since I’ve been playing guitar ever since, the weight to the guitar has made my back grow in this curvature. So when I stand, everything is sideways. It’s weird”

“That really adds to the pain in our music. It really does. I’m kind of grateful for it” 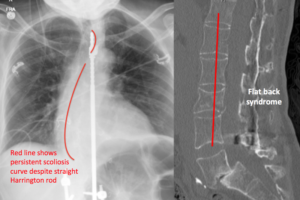 Cobain reportedly tried avenues like chiropractic treatment for his spine pain. It’s unknown if he ever considered surgery.

Scoliosis is a condition in which a person’s spine is curved. There are many different causes, but the condition can be extraordinarily painful for some. Surgery has been a long-term treatment option. From the 1960s to the late 1990s, scoliosis was often surgically treated with long straight stainless steel Harrington rods. Before Harrington rods, patients had their spines fused without supportive instrumentation.

The straight Harrington rods were intended to slightly reduce the coronal curvature and provide stability. However, the rod also straightens the natural lordosis of the lower back, potentially leading to more back pain. Starting in the late 1990s, newer spinal fusion techniques arose which allowed straightening and fusing the bones in a more natural and physiologic position. Modern surgery is thought to achieve longer and better pain relief.

Kurt Cobain had many problems including polypharmacy abuse and psychological troubles. However, it would be interesting to know how his career may have unfolded if more modern scoliosis treatment options had been available. That being said, “Come as you are”, is an ode to accepting who you are. That seemed to be an ethos of Nirvana.