Cerebrospinal fluid (CSF) shunts are a challenging aspect of neurosurgery. Shunts are placed for numerous indications, however the most common cause is hydrocephalus. 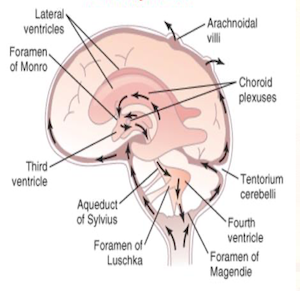 CSF is a shock absorber for the neural structures, transmits nutrients, and helps regulate pressure. It is produced in the brain’s ventricles by the choroid plexus, and circulates through and out the ventricles, and down the spinal column. In a normal system, the brain then reabsorbs the fluid to keep the volume of fluid and pressure fairly constant.

Unfortunately, this process doesn’t always work correctly and CSF can accumulate. “Hydro” means water and “cephalus” means head, so the Greek word hydrocephalus translate into slang as, “water on the brain”.

Various treatments have been attempted to handle hydrocephalus, ranging from attempting to decrease the production of CSF with medications or removal of the choroid plexus, to redirecting flow within the cranium/ spine, to diverting the fluid out of the brain/ spine with a shunt. 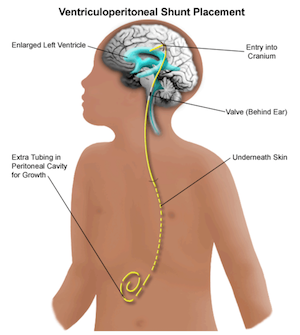 A shunt typically involves a catheter draining the fluid from the brain to another place in the body where the fluid can be reabsorbed. Typically this is the belly, termed the peritoneum. Thus, the device is called a ventriculoperitoneal shunt. Other destinations include the heart, lungs, gallbladder, or other organs. The amount of fluid drained is often regulated by a valve, using either pressure or volume control.

Shunts can fail, and for certain patients, this can be devastating. Assuming the shunt is needed at the time of failure, some patient develop slow and subtle symptoms while others very quickly deteriorate. Despite decades of engineering modifications and designs, shunt malfunction remains a significant problem. Failure can occur anywhere along the device, from a blocked proximal ventricular catheter, to valve malfunction, to distal peritoneal catheter obstruction.

About 50% of all shunts fail by 5 years. About 40% of shunted patients require a revision. However the longer a shunt functions, the less likely it is thought to fail. Shunts that tend to fail repeatedly do so sooner than those that don’t. About 14% fail in the first month, while only about 5% after 2 years. Often we counsel patients it’s the first 6 months that bears the highest failure rate, and the risk really drops off after the next 2 years.

Shunt failure is historically nondiscriminatory and unpredictable. A shunt can fail any time of day, to any type of person, and under any other circumstance.

However research over the last year, during the “shelter-in-place” period for COVID-19, showed a statistically significant decrease in the volume of outpatient calls and emergency department visits for shunt placement/ revision at some institutions. This calls to question the understanding of shunts.

This may suggest that environmental factors affected by the pandemic played a role in reduced shunt malfunction. There is no evidence to suggest that SARS-COV-2 can affect the rate of CSF flow. However it could be that previously undescribed social factors could affect CSF flow/ shunt functionality, such as exposure to other people, physical activity level, stress, sleep, etc… This also could have just been a crazy anomaly. Lastly, it could be that shunt placement or revision may not be as time sensitive as we previously thought. If patients having symptoms, either suggesting the need for a new shunt or revision of their existing shunt, are more concerned about something like a pandemic than their symptoms, maybe hydrocephalus can be observed for longer than we previously thought.

Further research is needed on this topic, and the next year should give insight if trends in shunting return to historical norms or turn different directions.