In 1775, the American Revolution was raging against the British for our independence, however, at the time numerous flags represented the different factions of colonists amongst the 13 colonies.

On December 03, 1775, the Second Continental Congress chose the first official flag of the United States, the “Grand Union Flag” or “Continental Colors”, with 13 stripes for those first 13 colonies. They wished to make a banner distinct from the British Red Ensign flown by civilian and merchant vessels, the White Ensign of the British Royal Navy, and the British union flags.

It is not clear who designed the Continental Colors, but it was an easy flag to produce since it simply involved sewing on 6 white stripes to the British Red Ensign.

Of course George Washington soon realized that flying a flag even remotely close to the British flag was not a great confidence-builder for the revolutionary effort.

On June 14, 1777, the “Grand Union Flag” was relinquished. The Second Continental Congress took a break from writing the Articles of Confederation and created the “13 Star Flag”, which kept the 13 stripes, but added the 13 stars in place of the “Union Jack”.

“Resolved, That the flag of the United States be thirteen stripes, alternate red and white; that the union be thirteen stars, white in a blue field, representing a new Constellation”

Of interest, this design did not specify how the stars were to be arranged in the field of blue, and it did not specify how many points the stars should have (Washington liked six). It did not describe how wide the stripes should be or how long the canton (upper left corner) should be in relation to the rest of the flag. It did not even indicate whether the red or white stripe should come first. As a result, many different arrangements were initially used.

The first “13 Star Flag” may have been the Hopkinson Flag with 6-point stars, but there is only circumstantial evidence of this. Hopkinson developed many seals and symbols during America’s infancy, including the Grand Seal of the United States. In 1777 he was the Secretary of the Navy, so it’s logical he could have developed an original flag around the time of Congress’ adoption. However there were apparent disputes between he and Congress regarding payment, as the committee stiffed him on the bill because he was already paid as a public servant and many others may have helped in the design. So while this flag existed early, it may not have flown first.

We all have heard of the Betsy Ross Flag, with 5-point stars arranged in a circle, but the story of George Washington approaching the seamstress, Ross, may be apocryphal. Washington personally knew Betsy and her uncle-in-law signed the Declaration of Independence. Betsy’s flag reportedly has 5 points because the cloth for a 5-point star could be folded and cut out with a single snip. But the story of Ross didn’t become popular until the 1800s by her grandson William Canby. Skeptics to Betsy Ross highlight that George Washington was pictured with a 6-point starred flag in January 1777, in a painting thought to be one of the most accurate physical portrayals of Washington and by an artist physically present at the battle. There is no written evidence in congressional records of Betsy Ross making a flag. And while receipts to Betsy Ross were found around 1776, she was known to create sails and various upholstery items for the Navy. Similar receipts exist for other seamstresses around the time as well, including Rebecca Young, whose daughter Mary Pickersgill later sewed the flag over Fort McHenry, inspiring Francis Scott Key’s Banner in 1812.

Regardless of which 13 Star Flag was first used, it was presented to Congress by the Marine Committee, as initially became regulation for naval affairs. This leads many to question if the 13 Star Flag was ever used by the Army, or just by the Navy.

Today we have the 50-star flag. Of interest, this design was finalized by a 17-year old, Bob Heft, from Ohio in the 1950s. While we were preparing for Alaska to be admitted to the Union, official designers added a 49th star to the existing 48, representing all of the states. But this high school student stitched 50 stars in a history class project, for the first time, because he hoped Hawaii would eventually achieve statehood. He sent his version to his Congressman, who presented it prematurely to Eisenhower who selected this design July 4, 1960. (After President Eisenhower stood with Heft to raise this flag for the first time, Heft’s high school teacher retroactively changed his grade from a “B -“ to an “A”)!

Most all institutions or entities create symbols to represent themselves. Flags are one of these symbols. From its origin, the 13 stripes represent the original English colonies sacrificing to make a new world. The white stripes, added to the Red Ensign, represent innocence and purity. The blue stands for justice and perseverance. The red was kept for courage and bloodshed in the defense of our country’s independence. The American flag is a symbol of our country and history, no matter how you perceive it. Many historically used the flag as a symbol of pride, but some now see the flag as a symbol of distress and dismay.

In the context of neurosurgery, the subspecialty’s branching off of general surgery also required its own evolution and creation of symbolism.

Harvey Cushing addressed the American College of Surgeons in October 1919 to mark the birth of a new surgical subspecialty, neurological surgery. Of course, the practice of neurosurgery started long before.

Mesoamerican cultures performed trepanations. Subsequently, many cultures operated on the brain, primarily to treat traumatic injuries. It was the 1800s when surgeons in both Europe and the United States started experimenting more with advanced cranial surgeries, although it’s pretty amazing those initial patients survived. It was probably Sir William McKewan from Glascow (first tumor removal in 1879) and Sir Victor Horsley from England (first to operate for epilepsy, pituitary tumors, hemorrhage and spine tumors), who really are the founders of modern neurosurgery.

Initially, it was neurologists who directed “general surgeons” where to operate, in the surgical theatres. In fact, the proclaimed first textbook of neurosurgery, “Brain Surgery”, was actually written by neurologist Dr. Moses Allen Starr at Columbia University in 1893. These “general surgeons” were originally operating on all areas of the body, including the nervous system. Original descriptions of Horsley report his operations on the appendix, which still is a common surgery for “general surgeons”.

However, Victor Horsley became the first appointed “brain surgeon” when he accepted the position at Queen Square in London. By studying the functional areas of the brain using electrical stimulation, brain surgery became fine-tuned for improved outcomes. While there was early resistance to Horsley’s attempts to show feasibility, by 1886, Horsley had performed ten cranial procedures with just one death. By the 1900s, he performed 44 surgeries with a mortality rate of 10%. “General surgeons” in Europe had death rates approaching 50%.

Harvey Cushing, the father of neurosurgery in the US, started training as a general surgeon in 1896. By 1899, he focused on the nervous system, after he visited Horsley in Britain. Cushing would write that he personally thought Horsley was too quick and a poor technical surgeon and Cushing fine-tuned Horsley’s techniques in America. Another US “neurosurgeon”, Sir William Osler, had been doing similar studies to Horsley in the late 1800s and also taught Cushing on this side of the pond.

Numerous other pivotal surgeons studied under Cushing, ultimately defining neurosurgery as a subspecialty, within the general field of surgery, in the 1900s. Neurosurgeons were not admired by all… Cushing was thought to be a difficult colleague.

After Cushing’s 1919 address to the ACS, proclaiming neurosurgery’s independence, eleven interested surgeons met in Boston on March 19, 1920 to form the Society of Neurological Surgeons. The purpose of the Society was to develop the field and educate the medical profession that neurosurgery requires special training in addition to that of the “general surgeon”. 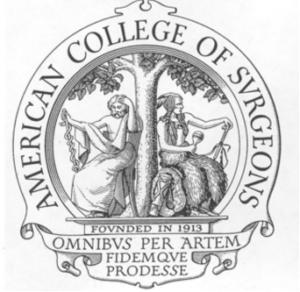 The Seal of the American College of Surgeons shows the Greek Aesculapius (from the Iliad), which is the symbol of European learning, alongside an American Indian Medicine man, sitting beneath a Tree of Knowledge. 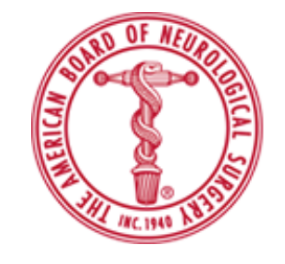 To achieve its own identity, the emblem of the American Board of Neurological Surgery (ABNS) was created, showing a primitive trepanation device, representing the pioneers of cranial surgery. The symbolism of the seal suggests the focus of neurological surgery, separate from “general surgery”. However, in a literal interpretation, it depicts a period when brain surgery indiscriminately killed many who went under its knife. 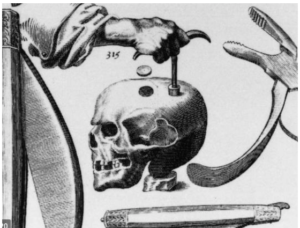 However, in every flag or emblem, there is symbolism attempting to create an identity founded in history.

The Existential Threat… and Neurosurgery
July 20, 2021