Did You Say “Furcula” at the Dinner Table? 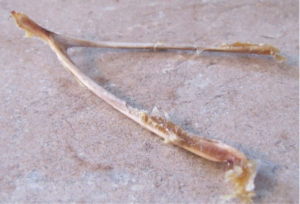 Although my wife is a vegetarian and detests seeing the holiday fowl’s carcass dehydrating on the counter surface of which she just prepared her vegetables, my kids fight each year over who gets the chance to make their dearest wish come true. The infamous wishbone competition.

The Etruscans, an ancient Italian civilization, may have been the first to start this tradition. They believed birds are oracles and provided a gateway to the future. They would extract the wishbone, anatomically called the “furcula”, and laid it in the sun to dry and preserve its powers. They would stroke it and make wishes. The Romans later decided to break the bone, giving more people the opportunity for longing. They called it a, “merrythought”. But only one person can break off the biggest piece and have their wish come true. This is why the bone needs to fully dry, so that it snaps instead of bends. (Functioning correctly the wet furcula in a bird can bend 50% larger than its resting position). Of course the key to any wishbone competition is to pick the thickest side, firmly grab as close to the base of the “V” as possible, and let your adversary do all the pulling so they create the point of weakness on their end.

But what is a furcula? In birds, it is formed by the fusion of the two clavicles and serves to strengthen the thoracic skeleton for flight. The furcula, with the sternum and scapula, protect the chest cavity while soaring, ensuring the flying motion does not damage its internal structures including the heart and lungs.

Humans don’t have a furcula, per se, because we don’t fly. The hyoid bone is our analogous structure. The hyoid bone is the only bone in the human skeleton that is free floating and not connected to other bones… like a piece of fruit suspended in Jell-o.

The human hyoid bone functions to provide us our “gift of the gab”. It’s properly positioned to work in unison with the larynx and tongue to make us the chatterboxes of the animal world. For this reason, we can form words at the Thanksgiving table instead of hoots and grunts like we’re chimpanzees. 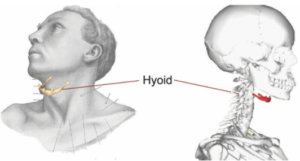 Complex speech means individuals can share ideas and concepts like no other species. What makes humans sophisticated is not just the highly organized structure of the cerebral cortex, but our ability to communicate the thoughts formulated by that cortex through speech. Some philosophers support a “language-first” theory, that thought is more or less limited by the absence of language. The language-first approach also suggests that cognitive abilities vary with one’s language ability. Research suggests that the hyoid bone in Neanderthal’s was similar to ours, however they are about 600,000 years old and complex language did not evolve until about 100,000 years ago. Our ancestors likely lacked elaborate speech because of their hyoid’s position in relation to other structures involved in language. After all, human babies have a hyoid but don’t initially speak likely because the larynx takes about 3 months to drop lower into the throat. It drops further in males around puberty, contributing to the rite-of-passage voice change. No other animal has a larynx low enough to produce sounds as complex as us today.

Without a hyoid bone, and it residing in proper position, the unique and intricate brain processes of modern day man would have limited potential. Thousands of years from now, hopefully our evolutionary successors don’t make a haphazard holiday tradition of cracking our hyoids after their dinner. Using our hyoids to vocalize its functional significance, we can simply just discuss other species’ furculas at the Thanksgiving dinner table.