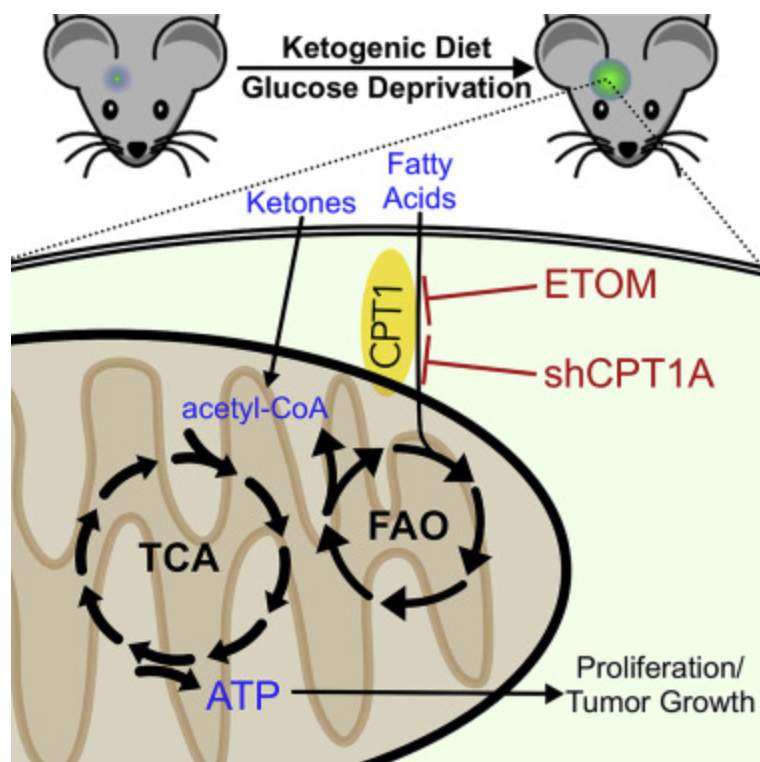 What does it exactly mean to “eat your way to…”? This is quite a common book title these days. You can pretty much eat your way to anything.

I specifically remember a few years ago being asked by a patient whether cutting glucose from their diet would diminish their chance for tumor recurrence after I resected a brain tumor. It made hypothetical sense… sugars provide the energy for cell growth, so cutting off the supply may halt the production. This is such a basic concept in biology, however, at the time it seemed too simplistic to be reasonable… the pathophysiology is much more complex. Just like ingesting fish oil pills does not alter stroke/ cardiac risk, I told them that diet adjustment would have no effect on their glioblastoma (GBM).

However, it turns out my understanding of GBM may have been too simplistic.

Over the last few years, an abundance of research has suggested that hyperglycemia may increase the prevalence of many cancers, including adult gliomas. It has been observed that patients with higher blood glucose levels during treatment have worse overall survival by several months compared to those with normal glucose levels. Patients with pre-existing diabetes have shorter survival compared to non-diabetics. However is this just correlation or causation?

The ketogenic diet, composed of high fat to carbohydrate ratio, has been studied in other neurologic conditions. The biggest of which in the neurosciences may be epilepsy. Turns out that the brain’s use of ketones (an alternative fuel to glucose) induces brain cell changes in a protective manner. Mouse GBM studies confirm that a ketogenic diet slows tumor growth and increases survival by changing the immune response and gene expression. However, we also know that in most cited animal studies in prestigious scientific journals, like Nature and Cell, only ~37% are replicated in human randomized trials and 18% are contradicted in human trials. In other reviews, the results of animal and human trials disagree about half the time.

Human studies are still in the safety and feasibility phase of maintaining the ketogenic diet. After all, the keto diet can cause low blood pressure, kidney stones, constipation, malnourishment and increased risk of heart disease. This diet has been associated with social isolation. It may be a difficult and dangerous combination for patients recovering from surgery and considering chemotherapy and radiation.,. surely not for everyone.

However, a recent case report in the UK was published on a patient who refused standard of care treatment. He had biopsy-confirmed GBM, with an improved genetic version, but delayed surgical removal for about 3 years. After eventually resection surgery, he continued a strict ketogenic diet and has shown limited tumor growth since August 2017, despite no chemotherapy or radiation. The survival of this patient is now ~ 80 months, far outlasting average survival.

In any aspect of science, we must recognize outliers and not base medical decisions on individual case reports. This patient in particular seems to have been abnormal from the start. Even with a favorable version of GBM, he unlikely should have survived the first 3 years prior to his surgery. However, we cannot discount the subsequent benefit, also seen in rodents, of a limited sugar diet. While definitive data accrues, there may be an advantage to a ketogenic diet in some patients with GBM.

We Just Don’t See Each Other Anymore… And Maybe Even Less in the Future…
October 18, 2021

The “Mr. Miyagi Trick” Does Not Exist in Neurosurgery
September 27, 2021

Why a Brain MRI May be More Helpful than a Lumbar MRI for Some Chronic Back Pain
September 13, 2021