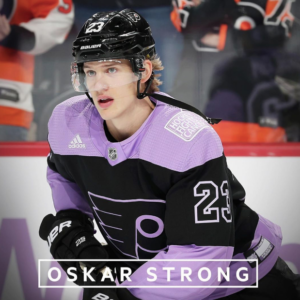 On September 3rd, Oskar Lindblom returned to the Philadelphia Flyers lineup in Game 6 of the East conference semifinal.

December 2019, Lindblom was diagnosed with Ewing’s sarcoma, which is a rare cancer of the bone. Usually, this is diagnosed in adolescents and young adults, and it is the second most common primary bone tumor in kids. At the time of diagnosis, Lindblom was 23 years old and was tied as the Flyers’ top scorer with 11 goals and 7 assists, over 30 games.

The location of Lindblom’s cancer was not revealed, but Ewing’s sarcoma commonly affects the long growing bones of the extremities and pelvis. Spine involvement can occur, most often in the sacrum. The tumor most commonly presents as swelling with pain. Unfortunately Ewing’s often just causes intermittent discomfort, which is vague and may delay the diagnosis. Other bone cancers are progressively painful, alerting of the problem quickly. When present in the spine, the tumor tends to invade the spinal canal and compress the nerves, possibly leading to neurologic damage.

Early diagnosis can result in a favorable outcome. Chemotherapy and radiation are the primary treatment options, although surgery is sometimes used. In the past, Ewing’s prognosis was dismal, with just a 10% survival in the 1960s. Even now, aggressive treatment like extremity amputation is occasionally offered.

While it was initially assumed Lindblom would miss the remainder of the 2019-20 NHL season, he finished his treatments in July. The delay and recent NHL resumption has given the rare opportunity for Lindblom to help his team advance through the playoffs.