German Neurosurgery, the World Wars, and the Berlin Wall 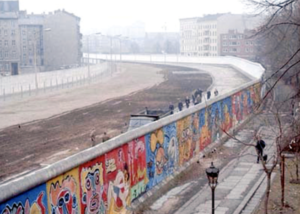 Following World War II in 1945, what remained of Germany was divided into four occupation zones, controlled by the United Kingdom, France, the United States, and the USSR/ Soviet Union.  Berlin was also subdivided into 4 sections, however, the city was fully within the Soviet zone.  Stalin and his Iron Curtain controlled East Germany and refused to eliminate communism, while the UK/ French/ US wanted to make post-war Germany self-sufficient with the Marshall Plan.  By the 1950s, many living in the Soviet Eastern Bloc started fleeing to the Westside.  To prevent this emigration, at midnight on August 13, 1961, the East German army began closing the border to West Germany, which is now remembered as, “Barbed Wire Sunday”.  By August 17, 1961, large concrete blocks were placed and East Germany Army units were deployed to shoot anyone attempting to cross.  By the end of the year, construction was complete.

As we celebrated this past Saturday, demolition of the Berlin Wall began 30 years ago, on November 09, 1989.  We often think of great events in history as a culmination of inevitable and great geotectonic forces, however, this one was more of an unintentional and premature, “whoops”.  In October 1989, East Germany started drafting temporary travel allowances for some citizens across a specific checkpoint.  Then on November 9th, during a press conference by the spokesman for the SED (Sozialistische Einheitspartei Deutschlands- ruling party of East Germany), Gunter Schabowski, a reporter asked about the timing of the quietly leaked change in regulations.  Schabowski, who had not been fully briefed on this, paused and confusingly replied, “What?”  Scratching his head and mumbling to his aides, he then shrugged, “As far as I know, it takes effect immediately, without delay”.  The news frantically spread, and thousands of East Germans immediately rushed to the 6 checkpoints between East and West Germany.  Initially, the East government ordered lethal force against anyone attempting to cross, but no East German authority would officially take responsibility, so the guards opened the checkpoints at 10:45 pm.  Soon afterward, West and East Berliners jumped on top of the wall and the wall came down. 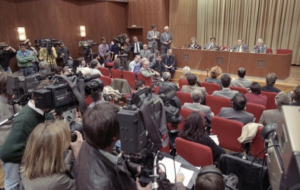 German neurologists and neurosurgeons have always had a broad influence on neuroscience and modern surgery.  The effects of the various Wars and the Berlin Wall have greatly affected the transmission of their innovations.

By the 1800s, global neuroscientists started understanding different functions of the cerebral cortex.  In 1870, Germany’s Gustav Fritsch and Eduard Hitzig stimulated the exposed cortex of a dog and observed contralateral muscle movement.  In contrast, damaging different areas caused weakness.  This was some of the first brain mapping, and this knowledge of topical organization has been critical in brain surgery through the modern-day.  A later German neurosurgeon, Fedor Krause, developed numerous surgical approaches to deep brain regions for tumor resections.  His textbook of neurosurgery in the early 1900s was the standard teaching book for decades.  Needless to say, the 19th century indicated German neurosurgeons would be a driving force in the field.

After World War I, though, Germany became an economic disaster, and German surgeons were excluded from international meetings.  The German language was banned from medical journals.  German surgical technological breakthroughs, like blood pressure monitoring and surgical suction, was not known outside Germany until the end of the Great War in 1918.

When Hitler and the National Socialist party came to power in Germany in 1933, they ousted Jewish doctors.  While the German population was only about 1.5% Jewish, nearly 16% of all German physicians were Jewish.  One of these was Ludwig Guttmann, who fled to the UK and both revolutionized the treatment of spinal cord injuries and founded the Paralympic Games.  Expelling some of their greatest minds led to Germany’s medical demise for decades to come.

The separation of East/West Germany by the Berlin Wall, not only physically divided the country, but also was an innovative barrier within German neurosurgery and to the rest of the world.  West neurosurgery thrived due to the support of the western countries.  But war reparations economically stressed East German neurosurgery, and professors of surgery initially resisted neurosurgery even as a subspecialty.  However, despite these difficulties, East Germany developed the surgical microscope in 1973, the laser scalpel in 1980 and the ultrasound aspirator in 1983. 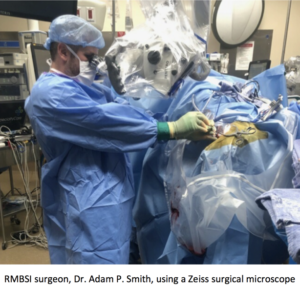 Carl Zeiss began developing the surgical optical instruments in Jena, Germany in 1846. After World War II, Jena was controlled by the Soviet East, and Zeiss-Jena was the first to use an electric lamp in their microscope.  It was not until after Soviet occupation resolved that this Zeiss-Jena microscope was readily sold in Western countries.

One near-miss in neurosurgical advancement involved, now-retired surgeon, Volker Sonntag.  One of the most renowned spine neurosurgeons of modern-day, Dr. Sonntag was born in East Germany just 6 months before the end of World War II.  Serendipitously, his father suffered a brain abscess causing the family to immigrate to America in 1957, just before the construction of the Berlin Wall.  His contribution of neurosurgery, both in America and internationally, could have been suppressed by the political turmoil of Germany in the 20th century.  We nearly missed 90 chapters for neurosurgical texts and 400+ journal articles, had Dr. Sonntag been silenced by the Berlin Wall.

After the reunification of Germany in 1990, the Berlin Wall still has greatly impacted the country.  The population that was once West Germany is about 60% larger than it was before World War II, while East Germany is 15% smaller.  However, the number of active neurosurgeons and collaborative neurosurgery has increased.  As we now celebrate 30 years of the wall being down, more German neurosurgeons will undoubtedly emerge as neuroscience pioneers.