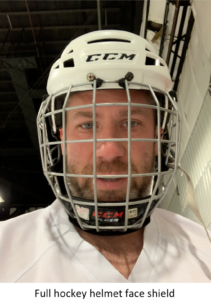 Spinal cord injury in ice hockey is a rare event but does occur.  I was in high school when my coaches showed us the video of Travis Roy crashing into the boards, 11 seconds into his first collegiate shift at Boston University.  Travis Roy suffered a spinal cord injury, changing his life forever, and becoming a teaching lesson for all hockey players with the, “Heads Up, Don’t Duck” program.  When skating near the boards, if you catch a skate edge and fall, your neck may have a lower risk of spinal cord injury in an extended position versus a flexed position.  Always keep your head up.

Fairly recently, a youth hockey player from a high school near my hometown broke his C5 and C6 vertebra after falling into the boards on September 29, 2019.

The full face shield on hockey helmets became mandatory in Canada’s youth hockey leagues in the late 1970s.  Then in the early 1980s, there was an average of 15 severe spinal cord injuries per year from hockey just in Canada.

The full face shield in hockey may be analogous to the advent of the seatbelt in cars.  Seatbelts have been mandatory in cars since 1966. But while seatbelts dramatically saved lives each year since their increased use in the early 1980s, they paradoxically give a false sense of security and caused many to drive even faster.

A 1995 report by the American Academy of Pediatrics made a similar conclusion regarding hockey full face masks:

“The introduction of mandatory head and facial protection has been effective in virtually eliminating ocular, facial and dental injuries in youth hockey, but it has also been problematically linked with an increase in catastrophic spinal injuries.  Players adopt a false sense of security when donning the equipment, leading them to take excessive and unwarranted risks… The addition of these protective devices has also altered how officials perceive game situations, leading them to be more lenient in administering penalties.  The net result has been an increase in illegal and injurious behaviors…”

In 1995 alone, there were 26 cases of severe spinal cord injuries from hockey worldwide.  But few are the result of a body check or cheap play by another player. Most are caused by a player losing balance while skating aggressively into the boards.  Because the boards are stiff (the plexiglass higher up has a little “give”), players previously slowed down when approaching the boards. With masks, there may be less concern.

Future steps hockey is considering to diminish spinal cord injuries is a “look-up line”.  Within some specified distance from the boards (maybe 3-6 feet), a colored line could be placed in the ice as a warning for extra caution.  Another option would be to make the full face shield optional in nonprofessional hockey. Yes, this may lead to more missing teeth and stitches, but the half-shield used by most NHL players could be an option.  As fast and violent as the NHL is, there has never been an NHL player being paralyzed during a game.