You may have heard of people being “thick-skinned”?  These people seem impervious to criticism.

However you likely have never heard of anyone being “thin-skulled”, unless you live around Cripple Creek, near Colorado Springs.  Here resides the cranium that has forever changed injury legal matters nationwide.

On Christmas night in 1901, a goldminer stopped in a Cripple Creek bar called the Dawson Club, when he got in a fight with the bartender.  The barkeep knocks the drunken man out with the butt end of his Colt .45.  After about an hour, someone checks on the miner, James Roberts, but he’s found dead.  When the bartender, William Brooks, went on trial, his lawyer J. Maurice Finn offered a very unique defense:  that James Roberts, the goldminer, simply had a very thin skull.  It wasn’t really the hit to the head, but the thin skull, that was the culprit in death.  In an 8 hour closing argument, Finn argued that if Mr. Roberts’ skull had been of “normal” thickness, he would have never died.  How could Mr. Brooks have known?  The lawyer was known as the “oratorical whirlwind in the west”.

The coroner actually cut off the top of the goldminer’s skull, and it was presented as evidence in court.  The bartender, Brooks, was acquitted. 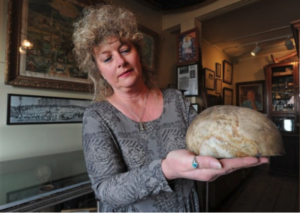 The skull of James Roberts now sits in the Cripple Creek District Museum.

In 1973, Colorado decided that this was no longer a reasonable defense.  Just because someone may be Humpty Dumpty, their injuries from an accident must be taken as you find them.  The at-fault party is responsible regardless of the victim’s fragility.  This is a precedent nationwide.

As it turns out, there is a variance in skull thickness, as well as skull shape, that may affect how well a person may tolerate head injury.  The face/ skull is not a uniform case holding all of our brains… it is a unique compilation of 22 highly individualized bones attached by synarthrodial joints called sutures.  There is an outer cortex on the surface, inner cortex next to our brains, and a softer type of bone called Diploe sandwiched in between. 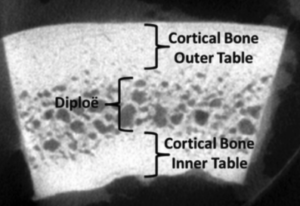 In a 2008 study of over 3,000 people, women’s skulls were found to actually be thicker than men’s, with women’s usually ~7.1 millimeters and men’s 6.5 millimeters.  The average front-to-back measurement is 171 millimeters for women and 176 millimeters for men.

The average frontal bone of the skull has traditionally been thought to tolerate between 2.3 kN and 9.9 kN.  But again, variations of fracture tolerance depends on skull thickness, duration of impact, and bone condition. 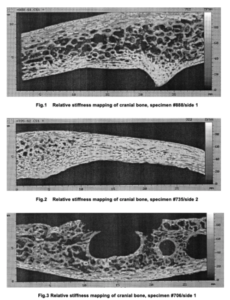 It can clearly be seen that different skull bones have widely different thickness and porosity, leading to different responses to impact.  Traditionally fracture strength of a skull has been reported in terms of forces (Newtons), however newer understanding categorizes strength as a “peak fracture acceleration” (head injury criterion).  The lowest HIC value associated with a skull fracture is about 450 HIC and the highest is 2,351 HIC.  Of interest, the highest HIC resisting fracture is typically observed in thicker skulls, but the lowest HIC associated with mid-range skull thickness.  Therefore fracture tolerance relates to a multitude of factors, with thickness being just one.

In the end, being “hard-headed” in Colorado may mean less about stubbornness, and more about being able to tolerate a good old-fashioned bar fight near the Springs.  But our legal system doesn’t always follow medical literature too well, so watch out for Humpty if you plan on giving him a knock to the head.