Carpal tunnel syndrome is commonly considered an “over-use syndrome”. Repetitive activities may aggravate compression of the median nerve in the wrist by the transverse carpal ligament, manifesting as pain, tingling, numbness, and/or weakness of the hand. Chronic handwriting or computer typing can provoke the symptoms. 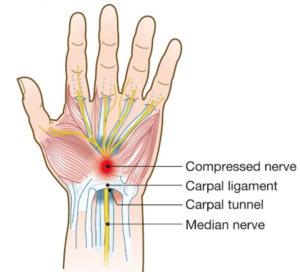 In the 1930s after the Great Depression, Chester Carlson was working in the patent departments of different New York-based companies, copying endless patent papers by hand. The only two options at the time were expensive photographic reproduction or handwriting. He was plagued by hand/ wrist arthritis, possibly in the form of carpal tunnel syndrome, inspiring him to create an automated process.

Unbeknownst to Chester, the first surgery for the release of the carpal tunnel was done in the 1930s.

Carlson was inspired by the work of Hungarian physicist Pal Selenyi, who demonstrated that the electrical conductivity of photoconductive material was increased when light strikes. Therefore in 1934, he converted his New York apartment into a laboratory and hired an engineer named Otto Kornei to help, since Carlson couldn’t devote his full attention to the work. In 1938, the two innovators coated a zinc plate with sulfur and electrically charged the surface with a cotton handkerchief. The charged plate was placed beneath a piece of glass, and both were exposed to light, causing the sulfur coating to lose its charge, producing an invisible electrostatic image. They then sprinkled the glass with a powder and wax-coated paper was applied. Once the loose powder was removed, there was a near-perfect duplicate. The process was named “xerography”. The first copy printed, “10-22-38 Astoria” 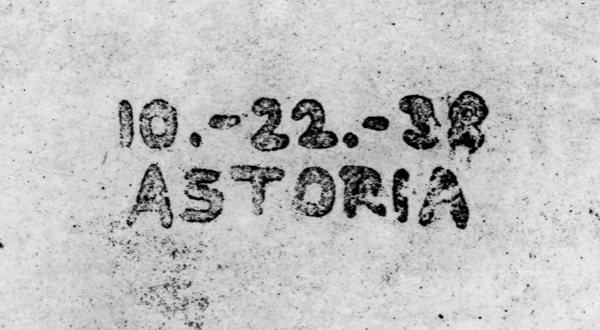 It took Carlson six years to find anyone willing to invest in xerography. Unable to produce the money, laboratory facilities, nor mechanical talent to transform his experiments into a working copy machine, it was a nonprofit industrial research laboratory, Battelle Memorial Institute, who eventually shared a contract with him. In 1947, Battelle joined a company called Haloid, which later took the name, Xerox. The first Xerox copying machines were sold in 1959. By this time Carlson had withdrawn from active involvement in the company.

Soon after, Xerox was making the greatest technological breakthroughs internationally, setting up the Palo Alto Research Center (PARC) in 1970. They created the world’s first Graphical User Interface, allowing primitive computer screens to display information beyond numbers and letters, including a mouse moving a cursor on the screen. The Xerox Alto allowed one to click icons, and open or close “windows”. They created the ethernet, capable of sending emails between employees of PARC. No other machine had this magical combo at the time. However, Xerox’s cash cow was photocopiers, as a personal computer market didn’t exist. They ignored their innovation.

Not much later, Steve Jobs took a tour of the PARC facility in 1979, asking:
“Why aren’t you doing anything with this? This is the greatest thing. This is revolutionary”.
The answer was… nothing. So Jobs went back to Apple and incorporated those features into Apple’s Lisa and Mac computers… and the rest was history. I’m not typing this RMBSI blog on an Alto-book… I’m using my MacBook.

In 2015, over 2,300 United States workers were studied, and the carpal tunnel was found to be associated with repetitive activities at work, including holding the wrist in extension while working at a keyboard. In another 2012 study of 461 government employees, those who had the highest number of keystrokes throughout the day were 2.2 times more likely to develop carpal tunnel syndrome. A 2006 study found that individuals with 12 hours of computer use a day were nearly 5 times as likely to develop carpal tunnel syndrome.

In the end, carpal tunnel syndrome is still primarily an “idiopathic” condition, in which many factors contribute without one definite cause. However, computer use may aggravate symptoms.

Chester Carlson set out in the 1930s to avoid laborious hand-copying-induced hand symptoms, which likely were carpal tunnel related. His end product revolutionized photocopying, birthing a company that developed the bones of the personal computer, which is now one of the most common aggravators of carpal tunnel syndrome in the 2020s.