On July 20, 1969, the Apollo 11 crew of Neil Armstrong, Buzz Aldrin and Michael Collins first landed humans on the moon and returned them to earth. This past Saturday was the 50th anniversary of the bold plan set forth by John F. Kennedy in 1962.

However, this world famous event occurred differently than planned, and potentially could have failed. A neurosurgery procedure changed the history of human spaceflight and the names we remember.

Alan Shepard first hitting a golf ball “out of this world”

The moon is about 238,900 miles from earth. Obviously many factors can interfere with travel that far. For example, the Apollo 1 spacecraft had a launchpad fire, killing all three astronauts. During Alan Shepard’s Apollo 14 lunar trip, in which he was the 5th man to walk the moon (… first to hit a golf ball there), NASA control center tried to abort the mission because they lost radar. Shepard later defended his disobedience… “You got to be kidding. I mean, after going 230,000 miles, you’re going to worry about a little radar. Come on.”

In 1968, Michael Collins was slated to be on the Apollo 8 crew. You may remember it was the Apollo 8 mission that provided the Earth Rise photo, which was dubbed “the most influential environmental photograph ever taken”.

However Michael Collins was was grounded from Apollo 8, due to urgent spine surgery. For a while, Collins noted his legs “didn’t seem to function normally”. He didn’t tell anyone because he knew he would be grounded. However his symptoms progressed with numbness and inability to walk up stairs, so he saw a neurologist July 12, 1968. He was found to have a large disc herniation at C5-6 compressing his spinal cord and causing myelopathy. By August 1968, he underwent a C5-6 anterior cervical discectomy and fusion by a neurosurgeon, and needed to wear a rigid neck collar for the next 3 months, making him ineligible to be a part of the Apollo 8 team. Instead, back-up astronaut James Lovell took his place, and the Apollo 8 became the 1st mission to leave earth’s orbit and reach the moon. 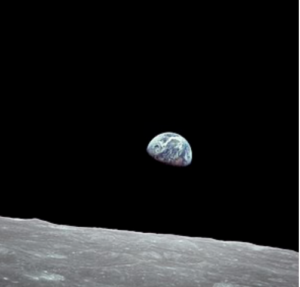 Back-up astronauts are supposed to be next-in-line 3 flights later. The original back-up crew for Apollo 8 was Neil Armstrong, Buzz Aldrin and James Lovell. However, since Lovell replaced Collins in 1968, Collins was inserted back into the rotation for Apollo 11.

During Apollo 11, it was Neil Armstrong and Buzz Aldrin who were the first two humans to walk on the moon. Armstrong was the least egotistical, a consummate gentleman, and most “Lindbergh-like”, so he was the commander of the mission and chosen to be first to moon-walk, even though this broke standard protocol. Aldrin was the lunar module pilot, and pilots were usually the ones to take spacewalks while the commander stayed on board. (Armstrong also was too valuable a resource for NASA to ever send back to space, so he walked first and then immediately retired as an astronaut upon return.) Michael Collins role was to orbit the moon in the command capsule, and then rendezvous with Armstrong/Aldrin to bring everyone back to earth. If Collins showed up even a few seconds to a minute late, or couldn’t steer the command capsule to perfectly attach to the lunar module, Armstrong and Aldrin may have been left on the moon. You can imagine how difficult it would be to steer a gyroscopically spinning and gravitation less 12,000 lb. mass with untreated cervical myelopathy.

The recognized Apollo 11 quote is, “One small step for man, one giant leap for mankind”. This quote may not exist without a successful neurosurgical spine procedure. History was forever change by one giant ruptured cervical disc.