I Wish I Had As Many Neck Bones As A Giraffe… 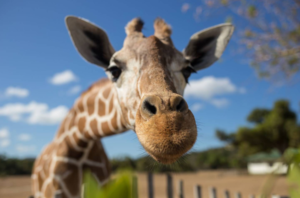 What do nearly all mammals have in common?

Besides being carbon-based, warm-blooded, possessing fur and secreting milk… most mammals have 7 cervical vertebrae. That’s right, with the exception of sloths and manatees, from every giraffe to every mouse… we all have 7 cervical vertebrae. Most mammals who develop a different number of neck vertebrae usually result in stillbirth, due to a crushed/ stretched spinal cord and altered blood vessels supplying the brain.Birds, reptiles, and amphibians have a varying number of vertebrae in their necks. 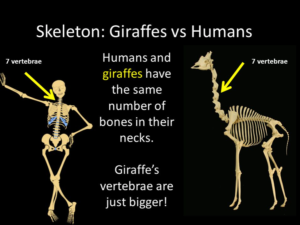 The evolution, or epigenesis, of the elongated giraffe neck, is interesting. Obviously there is benefit in the ability to outcompete shorter-neck herbivores for high hanging vegetation. Amongst giraffes themselves, a longer neck favors the male’s dominance in fighting for mating. A newer theory even suggests that a giraffe’s neck may help them regulate their body temperature in hot African climates by increasing their body surface area to allow heat to escape. They also are a “cylindrical animal”, so they can turn their “flat” sides away from the direct equator sunlight to reduce the amount of heat on their skin.

But how did the giraffe develop the long neck? The prior theory that giraffes “grew” to have large necks by “stretching” towards branches on trees is Darwinian but incorrect. Ancestral giraffes likely started with a longer neck than other mammals, and this probably predated giraffes completely.

However, it continued to change size through different Giraffidae subspecies, resulting in the African okapi and giraffe we know today.

The okapi (short-necked) forked in a different direction on the family tree about 5 million years ago from the Giraffa camelopardalis (long-necked African giraffe caged in the standard American zoo). The C4-C6 vertebrae are relatively similar in length between all giraffe species. It seems it was the C2, C3, C7 and T1 bones where the juicy phylogenesis occurred.

The first step was actually an elongated skull. Next, the C2 and C3 vertebral bodies became slender about 7 million years ago. After this, the spinous processes became high, thick, and vertically inclined about 1 million years ago. The giraffe C7 then elongated and incorporated a special blood vessel (vertebral artery) that supplies the brain, but enters higher in the C6 bone in humans and other mammals. Lastly, the T1 of a giraffe became “cervicalized”, where T1 is usually more a part of the thoracic spine in other mammals. (This point actually inserts some debate as to whether giraffes have an extra vertebra…)

The combination of these bony changes allows the 7 cervical vertebrae in giraffes to be as long as the entire human body.

At some point giraffes also developed their elongated legs along a parallel evolutionary track.

What’s another common anatomic feature between humans and giraffes? We both have 32 teeth, although giraffes have no upper front teeth. I guess that makes them more evolutionarily related to those from Kentucky and West Virginia? (Just kidding)

Check out the gallery below for some more pictures! 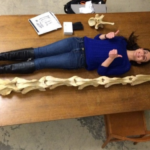 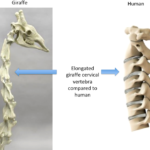 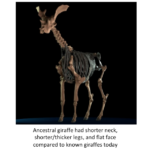