Is Gaming A Gateway To A Career In Neurosurgery? 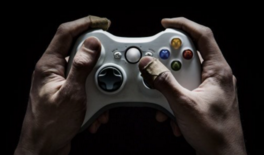 The e-sport market is expected to be a billion-dollar business in 2019. That’s “B”… billion. I guess this is why esports players consider themselves “competitive video gamers” or “professional gamers”, and want that clear distinction from just “gaming”. The esports audience is estimated to be about 450 million fans, who Livestream platforms just to watch other people play video games. Esport players reportedly can earn almost as much as the highest-paid golf or tennis stars. Esports is one of the fastest-growing categories in online gambling, reaching up to $8 billion in total wagers in 2019. Growth estimates point to upwards of $16 billion wagers in the future.

As such, not only are colleges adding esports to their curriculum with bachelor’s and master’s degrees, US high schools seem to be offering esports alongside traditional sports teams. You can even obtain a scholarship if you’re good enough. At reputable Universities like, “The Ohio State”, you can be a cutting-edge e-sport researcher if you’re not the typical “jock” who plays. I wonder if any e-sporters will need to be tested for performance-enhancing drugs? 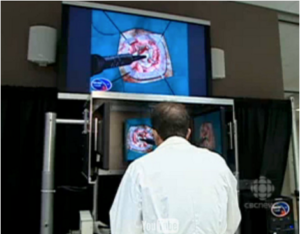 From a neurosurgery perspective, we’ve posted blogs on the dangers of playing “traditional” sports like baseball, football, and hockey… where you could actually break a sweat. Concussions and spine injury are risks in these sports, so I guess we should be supportive of the e-sport alternative where someone can’t really be injured in front of a screen. I guess they risk ocular problems or trigger thumb…

However, newer research may shed light on how esports, and even just “gaming”, could impact neurosurgery training and performance.

Anecdotal observations of young surgeons have long suggested that video game playing could increase surgical skills. In many surgical specialties, minimally invasive and robotic techniques are becoming more streamlined. This makes the surgeon perform the same procedure… remove a uterus, remove a gallbladder, remove an intradural spine tumor… through a very small space with smaller instruments and even more extreme precision. What may be interesting is that the fine coordination of the thumbs and fingers used with a game controller may be similar to manipulating surgical instruments. Studies in laparoscopic general surgery seem to show that video game players, who play more than 3 hours per week, are about 42% better and laparoscopic surgery. 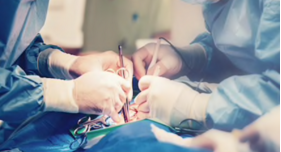 In May 2019, New York Times article medical school faculty commented on the marked decline in manual dexterity of students and surgical residents. They attribute this to a change in societal values and early schooling, where fewer hands-on courses like shop, home ec, drawing, painting, and music are offered. Young kids just aren’t developing their fine motor control, like the days when these pedagogues walked to school uphill, barefoot, in the snow, both ways. One of the most famous vascular neurosurgeons in the world, Robert Spetzler, MD, commented on how childhood tasks, like playing the piano, developed his early hand dexterity, which later translated to his success in the operating room.

“The sooner you begin doing a physical, repetitive task, the more ingrained and instinctive that motor skill becomes.”

Newer studies may suggest, that while some youth are dwindling their fine motor control by just tapping and swiping screens on their smartphones, others are increasing their skills and coordination with computer “gaming”. A sensorimotor skill often requires a repetitive pattern of vision and motor movement subconsciously. “Gaming” has an effect on sensorimotor control. Some research suggests “gamers” may have a superior ability to learn a new sensorimotor pattern.

As such, “neurosurgical gaming”, of sorts, is being developed as a teaching paradigm. Virtual simulators are now being used to train residents using a computer simulation of surgeries, like remove a brain tumor. 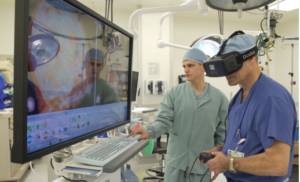 Simulators, like NeuroTouch or SNAP, not only teach with virtual generalized scenarios but also make high-resolution models from brain MRIs of their upcoming patients, to practice before the real procedure. The simulators give haptic feedback with the instruments’ force-feedback on brain tissue to achieve as real an experience as possible.

When I was growing up, Commodore 64 was nothing like the “gaming” or simulator platforms available for some future neurosurgeons. An aspiring surgeon was simply champion amongst his friends playing Hasbro’s “Operation”. However, it may be evident that “gaming” offers some advantage in 2019 for fine-tuning surgical skills very early in life. And once someone pursues a career in neurosurgery, they can use sophisticated simulators to master the specialty. It’s a “no-brainer”.

Maybe my patients should be asking me less about how well I slept the night before their surgery, and more about how much Minecraft or Call of Duty I’ve been playing.