Is It Hard To Get A Concussion If You Don’t Have A Brain? 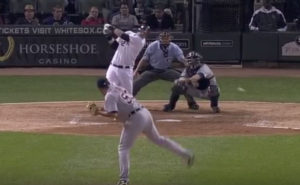 During the Tampa Bay Rays versus Houston Astros ALDS game October 5 th 2019, AJ Pierzynski commented on being a baseball catcher and getting hit in the head from foul tip balls.

He tried to be humorous in making the comment, “I don’t mind getting hit in the head. It’s hard to get a concussion if you don’t have a brain”. AJ was a 2005-2012 fan favorite White Sox catcher, and suffered numerous head hits from foul balls.

While he clearly thought he was being funny by being self-deprecating, his comment is very false. It’s also a bit of a surprising pearl, since Pierzynski himself foul-tipped a ball into Alex Avila’s mask in 2011, removing Avila from the game for a concussion. 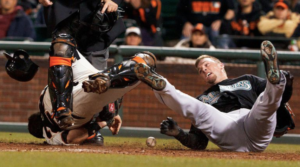 A concussion is often considered a mild traumatic brain injury, and is defined as, “a trauma-induced alteration in mental status that may or may not involve loss of consciousness”. A number of risk factors for concussion have been identified, with a major one being participation in sports. While there have been extensive investigations into the cognitive effects following concussions, including the fact that concussions may impact memory and intelligence for years, less is known about lower education or cognitive function instigating a concussion scenario.

A 2013 study in the British Medical Journal found that lower cognitive ability and educational level was a risk factor in men for sustaining a concussion. It could be that lower IQ and social factors may contribute to these men making poor decisions that could increase injury risk. This implication is very concerning because lower IQ may predispose to concussion, and then concussion may further lower IQ. 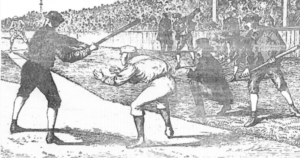 In baseball, catchers may have the highest risk of developing a concussion. This has always made scorecard position #2 a tough job. Baseball instituted the “Buster Posey Rule”, after the May 25, 2011 home-plate collision with Marlins’ Scott Cousins. This now protects catchers from being bowled over by aggressive runners, but it doesn’t address foul tip balls.

In the advent of baseball, catchers originally did not wear any protective equipment, including baseball gloves. After all, overhand pitching wasn’t part of baseball until 1884. The catchers originally stood about 20-30 feet behind the batter, catching the ball on a bounce. However in the 1880’s, when there was no restriction on how a pitcher could throw, base stealing became more popular, and the final strike needed to be caught on a fly, catchers moved closer to home plate. By 1901, catchers were mandated to stand within 10 feet of home. Current rules state that the “catcher shall station himself directly back of the plate… with both feet within the lines of the catcher’s box until the ball leaves the pitcher’s hand”. The catcher’s box measures 43 inches across and 8 feel long from the plate backward. 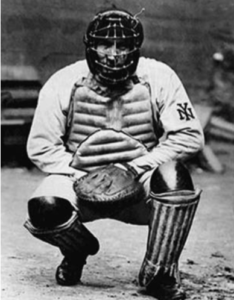 But it was the Cincinnati Red Stockings’ pitcher, Candy Cummings, who invented the curveball and made it extraordinarily difficult for any catcher to ever stop the ball unless he was just behind home plate and had a glove. It was a shock to the baseball world, when on June 28, 1870, Cincinnati’s backstop Doug Allison wore a pair of “buckskin mittens”. It wasn’t until 1907 that New York Giants’ Roger Resnahan wore a mask and pads to protect his livelihood. His manliness was criticized by fans, and catchers’ protective gear was later labeled, “the tools of ignorance”, since no one thought it really protected anything.

Since 2006, baseball catchers have been deactivated more than 77 times due to concussions. Notable catchers, including Joe Mauer, Justin Morneau, Pete Reiser, Jason LaRue, Corey Koskie, John Jaso, Jason Bay, and Ryan Freel, all reportedly have evidence of chronic traumatic encephalopathy (CTE has been most discussed in contact sports like football and hockey).

Baseball fans may note the change in catcher protective gear to a more “hockey goalie mask” over recent years. Even I was under the impression that this mask change, away from the traditional two-piece mask umpires still often wear, was more protective. In actuality the goalie mask is lighter and offers better vision, but may have less structural integrity and protection. There’s very little padding on the forehead to absorb a direct front hit. However the hockey-style mask provides better protection on the sides, which is potentially better for umpires who stand a bit further back and may be more prone to broken bat fragments. Therefore in reality, there’s no concussion-proof catcher’s helmet, but it one existed, it probably would stick out about three feet on all sides to distributed up to 2,400 pounds of a fastball’s force.

While AJ Pierzynski may not currently gloat his IQ, its actually catcher Morris Berg, who was known for being, “the brainiest guy in baseball”. A graduate from Princeton and Columbia Law, he reportedly spoke numerous languages and frequented radio quiz shows of his time period. After his stint as a MLB catcher from 1926-1934, he served as a spy for the Office of Strategic Services during World War II to infiltrate the Soviet atomic bomb project. Our national security surely cared both that he had a brain, and whether he suffered a concussion in baseball.