Metastatic Patterns in the Brain

Brain metastases are the most common nervous system tumor. These are tumors that have spread from somewhere else in the body. (The most common type of tumor starting from the brain is glioblastoma multiforme- GBM). Of metastases, tumors from the lung, breast, and skin (melanoma) are the most prevalent. Up to 40% of people with lung cancer will develop metastatic brain tumors.

Of interest, newer research is showing a preferential pattern of spread within the brain. Certain “microenvironments” may attract some cancer types.

Lung cancer and melanoma show a higher propensity for the frontal and temporal lobes. Lung is more typical to the temporal and melanoma to the frontal. On the other hand, the breast seems to preferentially spread to the cerebellum and brainstem. 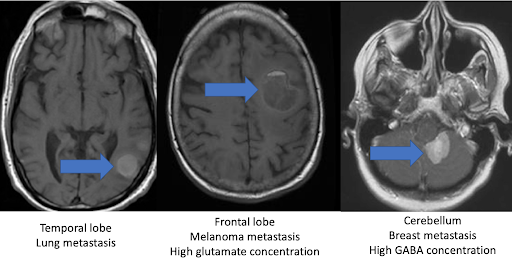 The reason behind these observations is not completely clear, but tumor-specific patterns suggest regional neural microenvironments facilitating colonization. For example, the cerebellum seems to have a bit more GABA-neurotransmitting-synapses than elsewhere in the cerebrum. Recent studies have shown that breast metastases also have enhanced the expression of GABA receptors and enzymes. Breast-to-brain metastases may be driven by this oncometabolite relationship. The cerebellum may just be the most conducive microenvironment. Similarly, the frontal lobe and melanomas both show enhanced glutamate activity (They both derive from the same embryonic origin- neural crest). Both glutamate and glutamine are found at higher concentrations in the cerebral cortex over the cerebellum, with a very high concentration in the white matter of the right frontal lobe. The link of the lung to the temporal lobe is less understood.

Nonuniform spatial distribution of some brain metastases may no longer be just an observation, but a predictable result. Unfortunately, while this forecast spread, it does not yet enable prophylactic treatment. This will be a future focus of research.