Neurosurgery and the Wonderful, yet Elusive, Fraction-less Metric System 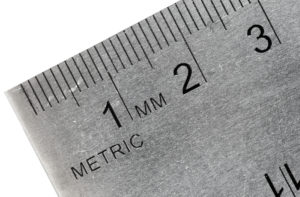 Having school-age children during this quarantine, homeschooling has brought to the forefront of my awareness why measurements in a neurosurgery practice seem so much simpler than even elementary level math.

When’s the last time you tried to add 3/16ths plus 4/5ths? Do you remember how to even start the algebra of complex fractions… I’ll be honest, I’m not even sure if this is a complex fraction equation?

As a neurosurgeon, I’ve completed basic schooling through high school… college… medical school… residency… even an intra-residency fellowship… An average neurosurgeon is in their 30’s by the time they start their practice. I’d like to think there’s a reason why they say… “it’s not like its brain surgery…” Yet my oldest child is only in 4th grade, and I’m brain-beaten by his arithmetic homework, recommending he search Google over highlighting the failures of my expensive education. His mother is smarter and brilliantly started YouTubing this stuff days ago… But my only lasting thought is that it doesn’t have to be this way. We don’t need fractions… The decimal point I deal with in neurosurgery is a much more beautiful thing.

In neurosurgery, mathematical measurements are critically made all the time. Neurosurgeons need to calculate lengths of spine pedicle screws and fusion rods, aneurysm clips, dural grafts. When we describe the size of a brain tumor to a patient and their family, we use millimeters or centimeters, with decimals. We never have to tackle funny looking fractions of inches, because in neurosurgery, and all of medicine for that matter, we use the metric system. We never have to consider different pedicle screws being measured using an avoirdupois versus troy system since the metric system is uniform no matter what object is being measured.

On a quick sidebar, what measurement system is used in the United States? Obviously it isn’t metric… If you think it’s the “imperial system”, you’re still wrong. The British use “imperial” measurements, but we use the “United States Customary Units”. If you drink a pint of beer in the UK, you may find yourself a bit more intoxicated than if you drank a pint in the US, due to the 4 fluid oz difference.

The metric system is the universal system that every other industrialized nation uses… except for the US. Now, we have soda bottles in liters.. but that’s about all the average person discusses in metrics, although metrics are much more uniform when displayed on the standard wooden ruler. 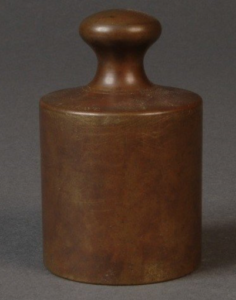 Early version of the kilogram, intended to be brought to the US from France as a standard for the metric system The pirates eventually sold this, which made its way to the Ellicott family, and was passed through generations until 1952 when it was donated to the National Institute of Standards and Technology museum in Maryland.

So in the end, who’s to blame for my son thinking poorly of me during this quarantine? Well, it’s probably Thomas Jefferson. In the late 1700s following the Revolution, the US needed to decide its measurement system. Jefferson was the man in charge, as Secretary of State for George Washington, and for the time being the US continued to use the traditional British system (imperial). Jefferson was highly influenced by France (Monticello eventually went bankrupt over his love for Chateau Haut-Brion), who was using the metric system, but he was concerned the US wouldn’t be able to verify the metric unit of length without some sort of reference tool. Even though both he and Washington may have favored a decimal system, obtaining that reference would require visiting France. Huge error… Tommy boy.

Although France supported the American colonies during the war, tension soon rose in the 1790s. Jay’s Treaty was signed to assuage antagonism between the US and Great Britain and help the US build a stable national economy. But this upset the French, who in 1798 snubbed the US when they invited dignitaries from other countries to visit Paris and learn about the metric system. Jefferson quickly wrote his buddies in France, like the Marquis de Lafayette, who tried to send scientist, Joseph Dombey, with a standard weight (just a small copper cylinder) to enact the decimal metric system. But during the voyage, a storm whisked away from the ship to the Caribbean, where Dombey was imprisoned by British pirates and that kilogram reference weight never made it to the US (at least not until the 20th century). By 1821, John Quincy Adams was president and determined the US Customary System was sufficient and required no changes.

In the late 1800s, the US almost converted metric again. However “retooling”, (literally.. changing our screw threads and heavy machinery) would have been too expensive. President Gerald Ford signed the Metric Conversion Act in 1975, but Reagan stopped our, “inching towards metric”, in 1982 based on public appeal. Now, we’re stuck with Quarter Pounders and 9- pound hammers…

What if the US had converted to metric? For one, I wouldn’t be embarrassed during a stay-at-home-order with my kids. Two, patients would stopped asking neurosurgeons things like, “my tumor is about 3 centimeters… is that about an inch?”. I wouldn’t then have to scramble and start using fruit analogies to bridge this language gap (In the satire of Jim Gaffigan… “Worst tumor, grapefruit. Worst fruit, grapefruit”). For more serious examples, the US could avoid costly disasters like the 1999 debacle were NASA crashed the Mars Climate Orbiter because Washington was using metric units and Colorado-based Lockheed Martin was using customary units. Turns out this little yuk-yuk was about a 100-kilometer difference and $125 million down the drain. In medicine, pediatric medication dosing errors would be less frequent with parents having trouble discerning tablespoons versus teaspoons, and adult errors less frequent without having to convert body weight from pounds to kilograms.

But for those metric fans disgruntled with Fahrenheit and wishful hopes of using Celsius… Celsius isn’t technically metric. It was derived from Kelvin, “adopted” as such, but not born metric