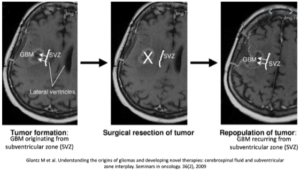 Glioblastoma multiforme (GBM) is the most aggressive and deadly brain tumor in adults. We still do not know exactly how GBMs form, or why they universally recur. It was previously thought that glial cells (astrocytes) were the only type of cell that could proliferate in the brain, so GBMs must start from these cells. However, in 2004, a new theory arose that GBMs could form from neural “stem cells” located in the subventricular zone (SVZ) of the ventricles.

The ventricles are fluid-filled spaces in the brain. Neural stem cells (cells capable of replicating and forming new cells) are known to be present in the SVZ, which is a layer of tissue in the ventricles. The SVZ provides a microenvironment, distinct from other areas in the brain, supporting the growth and reproduction of stem cells. Tumors in contact with the SVZ seem to be associated with more aggressive tumors and shorter survival (~80% of GBMs involve the SVZ). Patients who undergo radiation targeted at the SVZ, compared to the tumor region alone, seem to have improved survival. Animal studies reveal that administration of carcinogens (substances promoting tumor growth) may preferentially induce the formation of brain tumors in the SVZ. 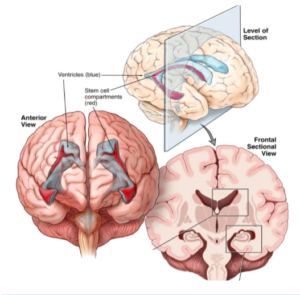 Of course, not all GBMs or lower grade brain tumors are in contact with the ventricles, so one flaw in this theory is how subventricular cells migrate to other brain regions. Has all this SVZ research since 2004 simply been a coincidence? A new research paper in Nature Communications, has found a genetic link between glioma tumors and the SVZ, suggesting it’s not just a coinkydink.

The group studied mice with a genetic alteration known to occur in GBM, called a p53 mutation. Starting at 5 months old, the researchers followed weekly brain scans to look for brain tumors. Of those mice that did, two groups diverged: one group having tumors around the SVZ and another group have tumors away from the SVZ. They then used genetic tests which traced the origins of the tumor cells back to the SVZ. This finally gives some proof that the starting cell may be in the SVZ. But the scientists went further. They discovered that most tumors spontaneously acquired some additional mutations along the way, including a mutation in a PTEN gene. Amazingly, if they took another group of p53 mutated mice, and genetically shut down the PTEN gene, brain tumors still formed but there were no migrations away from the SVZ. In summary, this group found genetic evidence that at least some GBMs start in the SVZ. However they may have identified the other genetic mutation that either keeps the tumor around the ventricle or allows those SVC cells to migrate away to other areas in the brain.

PTEN suppression may be a new focus of oncology research to limit GBM spread. Of course, the genetics of GBMs is still beyond just p53 or PTEN mutations, so we cannot yet genetically shut down GBMs or other gliomas completely. Unfortunately SVZ research shows that the neural stem cells in this region have variable genetic make-up, which likely explains why GBMs are not a homogenous cluster of tumor cells, but a conglomeration of different cancerous genotypes. This may be the greatest limitation to both chemotherapy and immunotherapy for GBMs. But for now, this is a win against GBMs. If we can limit them to a single location, it is likely easier to attack.