Pinched Nerves in the Weight Room 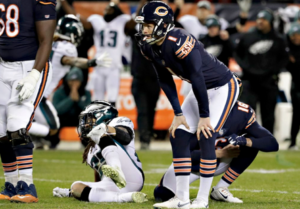 John Madden would have called it a “double doink”. Last year the Chicago Bears’ Cody Parkey missed a potentially game-winning field goal against the Eagles, in one of their more promising seasons of recent years. But Bears fans found quick salvation in their 2019 kicker, Eddy Pineiro, who was 100% in extra points and field goals in the first two games. However the proverbial Chicagoland billy goat wandered its way south and piqued its head in the football arena Saturday when Pineiro, “pinched a nerve”, while weight lifting. This caused some symptoms in his right leg, making him questionable for Monday night’s game against the Redskins, although he ended up playing and performed well. Of course it is unknown if Pineiro has a disc herniation or his exact diagnosis, but he missed his first field goal of the season.

Professional athletes and weekend warriors alike, tend to believe that weight lifting is an excellent method for core back strengthening. While core strengthening exercises are proven to improve back pain and potentially treat disc symptoms, axial compressive weight lifting from maneuvers like deadlifts and squats are potential triggers for disc herniations.

Deadlifts involve standing with feet hip width apart and lifting a barbell while bending from the hip and maintaining a straight back. Squats involve holding barbells or dumbbells, lowering the hips to a 90 degree angle to the ground, and raising to an upright position. Both techniques axial compress across the low back discs, potentially leading to herniations. Our bodies, throughout a natural life-span, have enough trouble bearing our own weight, let alone handling this extra iron.

A substitute for a deadlift or squat could be a “bridge” or “planks”.

Bridge
While lying on your back, knees bent up about 45 degrees and feet flat on the floor, contracting the abdominals and buttocks to raise the back and buttocks off the floor strengthens back muscles without compressing across the discs.

Plank
While lying on your stomach, prop up onto your elbows and toes, keeping your back level.

Overall, the best exercises for your back probably should not involve excessive loading of the spine using heavy weights.

Interestingly, a 2016 study in the journal Spine, indicated that the majority of NFL players who have undergone surgery for a herniated disc are able to resume their careers and perform at a high level. On average, players continued playing for about 44 games and three years after disc herniation surgery.

But as a direct message to you, Eddy, the Bears should have never cut Robbie Gould in 2016, after he established himself as one of the most accurate kickers in NFL history. However the Bears do not cry because its over… they smile because it happened. Now the Bears have you. You need to stay healthy at least through December 15th. Ditch Khalil Mack as your lifting partner and listen to someone more like Herschel Walker, who reportedly only trained doing 2,000 sit-ups and push-ups a day.