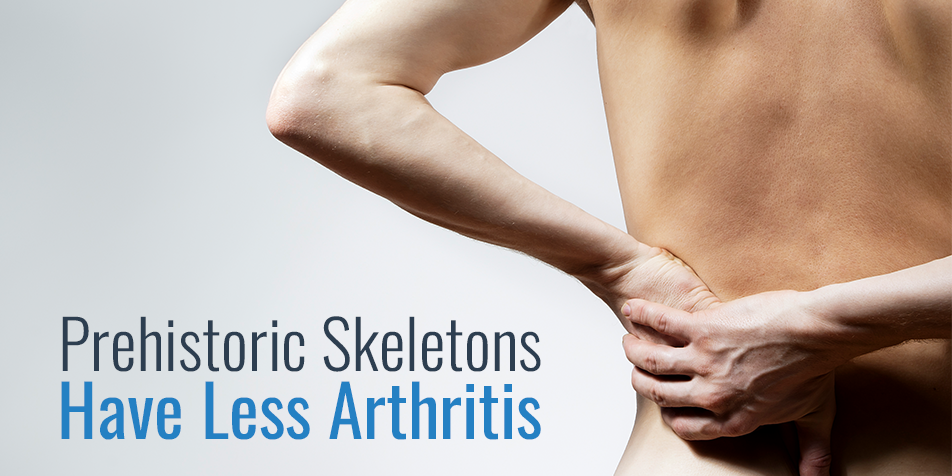 The Center for Disease Control says adults should exercise moderately for 2 ½ hours per week and engage in vigorous activity for 1 ¼ hours per week. However, the average American only does about 17 minutes of fitness activities per day. That’s about 2 ½ times less than the average teenager and about 4 minutes more than seniors over the age of 70. Because of this overwhelming inactivity by the average American adult, body-wide arthritis rates continue to increase. However, very little spine arthritis has been found in prehistoric skeletons. And it’s not just because we are living longer and eating more foods that are less nutritious. A recent study at Harvard indicates that it’s actually in part due to lower activity levels and sitting.

How Did Our Prehistoric Ancestors Live?

Life thousands to millions of years ago primarily involved hunting and gathering. Living in the wild, our ancestors were very active with little sitting or rest during the day. They were constantly on the move using their joints and muscles to find food, build shelter and survive. While there are signs of some arthritis found by scientists in these skeletons, it is much less than we see today.

If Sitting on the Couch is Less Stressful on My Joints Than Hunting, Then Why Do We Have More Arthritis?

Conventional wisdom suggests that arthritis is purely from “wear and tear.” It would, therefore, be expected that early hunter-gatherers should have much more arthritis than people of today. But this is not the case. Early in life, frequent motion and impact on joints keeps the cartilage and ligaments healthy. This continues as we age. Therefore, there’s a beneficial effect of being active (of course not over-active). But probably the most ignored component is the damaging effect on joints from fluctuations between sitting and activity. This is exactly what most Americans do during their works days and even in leisure. We sit the majority of our workday, then get up to go on short breaks and to go home.  When we exercise, we have short bursts of activity but then stop to sit or lay down. After this brief rest, we get up again and wonder why we’re so sore.

Additionally, and specifically regarding the spine, compressive forces on low back discs are lower when standing than while sitting. And they increase even more when leaning forward such as during computer work. 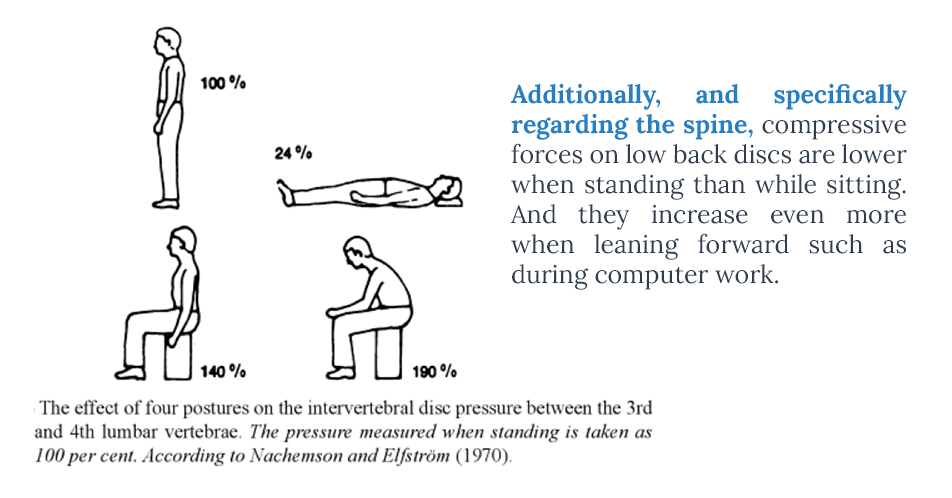 How Else Does Standing Improve Back Pain?

How Can We Avoid These Sitting/Standing Fluctuations and Stand More Often?

Simply put, standing and moving is the best option and “motion is lotion.” During leisure, there’s not an excuse to not be active, and during work, standing desks are becoming more popular.

Especially in Colorado, we are inundated with the Paleo diet. We could not blog about diminished prehistoric arthritis without addressing dietary implications. Dr. Loren Cordain, Ph.D. at Colorado State University is the proclaimed leader of the Paleo movement. He and many others have theorized that eating the Western diet (high-fat, high-protein, high-sugar and processed) instigates an inflammatory response, which potentially starts an autoimmune cascade leading to arthritis and other problems. There’s no doubt that the Western diet makes us overweight and an elevated body mass index potentiates arthritis. But while milk, carbohydrates, fats, protein, fiber, fruit and vegetables have been linked to diseases like inflammatory bowel disease (IBD), and dietary modifications may improve the symptoms, no major studies have equivocally proven that a specific diet causes inflammation. Simply put, if we eat the Paleo Diet, we become “Neander-thin,” and that may be it.

In reality, scientists are still figuring out what our ancestors even ate. There’s a lot of proof that opposed to lean meats, fruits and eggs prevalent in the Paleo diet, the caveman’s diet may have been purely plant-based like a cow’s. Just because they had stone tools and probably hunted, it does not mean they were hunting for food. The actual diet may have been regional. East African groups probably ate grasses while South African groups ate nuts and seeds. Many of the foods listed in the modern Paleo diet did not even exist in the Paleolithic era. And many of the animals, fruits, and vegetables present then are not similar to what we have today.

Want to learn more about arthritis and how it affects your bones? Contact us today at Rocky Mountain Brain & Spine Institute for more information.