Pursuing Surgery, but Avoiding the Knife

We’ve previously written a blog about “The Precision of the Surgical Knife”, highlighting the knife as one of the most useful tools in human history. The shape, size, and type of metal used in surgical knifes has evolved to match the advanced surgical needs. It partly has been the knife facilitating some surgeries previously not possible. However in 2021 we may be to the point where advancements in minimally invasive and noninvasive procedures can avoid knives altogether.

Laser interstitial thermal therapy (LITT) is an emerged technique using stereotactic lasers to damage tissue for treatment. It was first described in 1983, however the inability to monitor and control the temperature of the laser, and subsequent extent of tissue damage, prevented widespread adoption. However in the 2000’s, new intraoperative MRI techniques enable a real-time temperature gauge during the ablation. This is called MRI thermometry. Probe modifications improve safety and accuracy.

The workflow of this technique is straightforward. Prior to surgery, a stereotactic MRI or CT is obtained and an optimal trajectory to the brain target is determined. In the operating room, an entry point is made on the head, and the laser probe is advanced. Another MRI image verifies the location, and the ablation process is initiated, with MRI images obtained between firings. The temperature of the brain surrounding the probe can be monitored, and imaging verifies a destructive area.

Advances to the LITT probe include restricting the direction of emitted photons, advances in probe cooling, and sheaths to protect traversed tissue. Current probes have an effective treatment radius between 1-2 centimeters from the tip.

This technique is primarily used in seizure (epilepsy) surgery. However LITT probes now can help treat tumors. Deep-seated tumors, otherwise difficult to access tumors, masses resistant to alternative therapies like radiation, or tumors in patients unable to tolerate surgery, may be optimal for LITT probes.

Using the same concept as LITT, newer researchers have developed other non-invasive approaches to produce focal neuronal damage to the brain. The approach has taken the acronym PING (Precise, Intracerebral, Noninvasive, Guided surgery). An MRI-focused ultrasound can been used to enter the brain and deliver a neurotoxin (quinolinic acid) to a targeted region that only destroys neuronal cells, while sparing other surround supporting tissue. Previously, quinolinic acid was known to be a selective destructive agent, but it does not normally permeate the brain tissue on its own. Using the new PING delivery, quinolinic acid may be delivered non-invasively and may have several advantages. 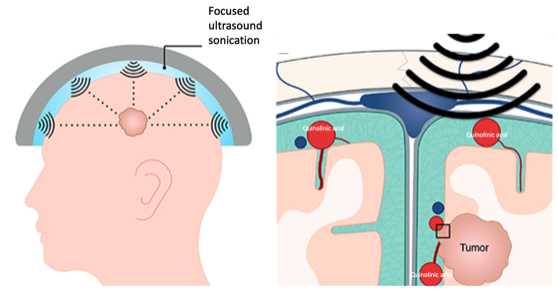 In the recently published study, the feasibility of PING delivery of quinolinic acid was established in animal models. The scope of neurologic conditions/ disease the neurotoxin can safely treat still needs to be established. But what is apparent is that PING quinolinic acid delivery seems to spare the brain tissue of passage. The neurotoxin seems to spare non-neuronal structures. Multiple sonications can be administered to a given target, contouring the sonication pattern to treat irregularly shaped targets. LITT was like the stereotactic atomic bomb. PING quinolinic acid is what the neutron bomb was supposed to be…

MRI-focused ultrasound delivery systems have been used with chemotherapies, immunotherapy, and gene therapy to reduce systemic toxicity and improve treatment efficiency. This will be interesting research to follow.