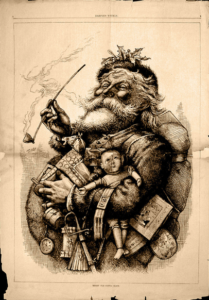 While we recognize not everyone reading RMBSI’s blog includes Santa Claus in their winter celebrations, we all should be gravely concerned about the various neurosurgical issues the Big Guy may manifest.

The monk, Saint Nicholas, was born in an unknown month of 280 AD in modern-day Turkey.  So this year he would be ~ 1,739 years old. He’s older than the Easter Bunny but younger than the Tooth Fairy.  Yes, Saint Nicholas was a real person, known for his kindness, and had the Dutch nickname, Sinter Klaas. The legend of modern-day Santa Claus developed from Washington Irving’s 1809 book, The History of New York.  The image we now have stemmed both from Clement Clarke Moore’s 1822 poem, “An Account of a Visit from St. Nicholas”, which is more popularly known as, “Twas The Night Before Christmas”, and Thomas Nast’s 1881 Harper’s Weekly cartoon pictoralizing Santa.

“With a little old driver, so lively and quick, I knew in a moment it must be St. Nick. He had a broad face and a little round belly, That shook when he laughed, like a bowl full of jelly. He was chubby and plump, a right jolly old elf, and I laughed when I saw him, in spite of myself”

– “Twas The Night Before Christmas”

Today, Kris Kringle is iconically commercialized by shopping centers (since the 1820s), the Salvation Army (1890s), and movies (most notably “Miracle on 34th Street” in 1947).  Most Americans imagine a similar picture of the unhealthy Santa Claus, who is plagued with numerous neurosurgically-related conditions.  Yes… even fairy tale legends need neurosurgeons… 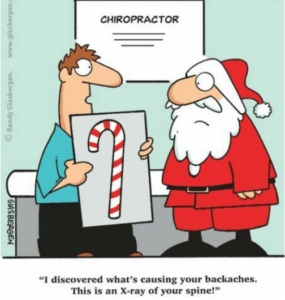 About 60-70% of people experience neck and back pain in their lives, and the prevalence increases between the 3rd and 7th decades of life.  Considering legendary Santa is in his 174th decade, he is likely to have major neck and back pain based on age alone.  Regarding other known risk factors, he is morbidly obese and short in stature, with a body mass index ranging somewhere between 24.8 and 373.  The extra-axial weight across his spine likely has resulted in severe spinal degenerative disease. And each year he just gets heavier. Even though only about 1% of the 75 million homes he visits leaves him a cookie and glass of milk… probably rarely fat-free… that’s still 750,000 cookies and 46,875 gallons of milk ingested in one night.  He smokes a pipe, accelerating degeneration of his discs. Occupational exposure to soot following centuries of sliding down chimneys, as well as the poor ergonomic positions he has contorted his rotund self in to, likely didn’t help his arthritis. Carrying the extradimensional expanded bag of gifts, with poor lifting techniques, most definitely has caused a herniated disc or two.  To treat his back pain and possible sciatica, Santa doesn’t have many options. We all know the elves do much of the manual labor, but managerial positions simply do not allow much time for physical therapy these days. No one else actually lives at the North Pole, since the ice is constantly moving and a permanent mortal community cannot be established. Therefore, there are no physiatrists around to offer injections, and the extreme cold weather likely would make them unsafe.  While he’d be hesitant to let the anesthesiologist shave some of his beard to tape the endotracheal tube in place, a spinal decompression procedure may be his only option. 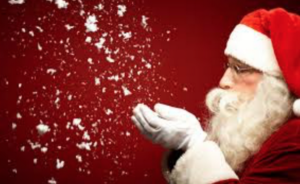 Santa also likely has peripheral neuropathy.  The 750,000 cookies surely would raise his blood sugar and put him at risk for diabetes.  If he samples anyone’s eggnog very frequently, he could develop cirrhosis. Small amounts of nutmeg can be protective to the liver, but toxic levels may be harmful.  These are just two likely contributors to soft tissue swelling and hypertrophy around his cubital tunnel and transverse carpal ligament, leading to ulnar neuropathy and carpal tunnel syndrome.  Both of these compressive neuropathies could be worsened by driving his sleigh and tightly gripping the reins. How can Santa do his job with atrophied, numb and painful hands??? He surely can’t make it all the way around the world in one night wearing wrist braces!  He is likely in dire need for decompression of his ulnar nerve and a carpal tunnel release.

Old St. Nicholas may have brain problems to top it off.  Since Santa has no rage, he may have a lesion in his dorsomedial hypothalamic nucleus.  He clearly doesn’t experience satiety from eating, so he may have a lesion in his ventromedial hypothalamic nucleus as well.  While passivity and inability to turn down food can be amicable traits in a houseguest, they could be detrimental to his health the other 364 days of the year.  In order to overcome this, Santa could benefit from a deep brain stimulator. 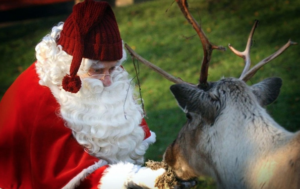 Hopefully, Kris is careful around his eight tiny reindeer, too.  “Chronic Wasting Disease” is a zoonotic prion disease affecting deer, elk, moose, and reindeer.  In fact, maybe it’s the prions causing Rudolph’s nose to glow? (In the laboratory, prions fluoresce red under light microscopy).  According to the CDC, it may take over a year for Rudolph to manifest symptoms, so Santa could contract this and develop major neurologic deterioration if he came in contact with bodily fluids.  Ms. Claus would need to bring him in for a brain biopsy to formally diagnose.

In summary, there’s a multitude of neurologic conditions potentially plaguing our beloved Santa.  He’s in some real health trouble. It may take a swift neurosurgeon at Rocky Mountain Brain & Spine Institute to save the future of commercialized Christmas.  But while we work on St. Nick, we wish you and your family a healthy and joyous holiday season.