“So Easy a Caveman Could Do it?” 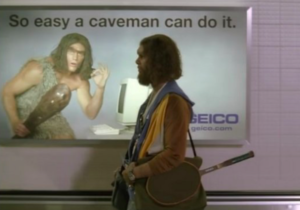 It’s difficult to predict the persona of a caveman, however my impression would be a pretty tough cookie. I picture someone really living in a cave, wearing an animal hide of sorts, probably carrying a club, and likely with a bone through their nose… just like the Geico commercials or the Flintstones.

I sense the hunter-gatherer lifestyle would be grueling on one’s body. Some research suggests early apes or hominoids may not have suffered osteoporosis possibly due to their active lifestyle even into older age. I would imagine cavemen didn’t complain about pain all too much.

However were cavemen really impervious to pain? We suspect that with a more primitive brain structure they may not have been as smart as modern human’s, but what may have been their pain threshold compared to us?

Researchers have identified some genetic changes in modern humans that were present in many Neanderthals. Specifically, a sodium channel gene, SCN9A which encodes the protein Nav1.7, is crucial for impulse generation and conduction in peripheral pain pathways. Due to gene flow from Neanderthals, a Neanderthal mutation of three amino acids happens to also be found in ~0.4% of present-day Brits in theUnited Kingdom.

The full Neanderthal variant of this gene, called a gain-of-function mutation, may lead to heightened pain sensitivity in present-day people. On the molecular level, the Neanderthal ion channel is more easily activated which may explain why people who inherited it have a lowered pain threshold. They feel more pain.

Whether Neanderthals actually experienced more pain is difficult to know, but this genetic research suggests the threshold for initiating pain impulses was lower than in most modern humans. The translation of pain input from peripheral nerves to consciousness involves the spinal cord and brain, which was likely more primitive in Neanderthals. This may have been advantageous for cavemen, allowing heightened sensitivity to stimuli more as a protective mechanism… like whiskers on animals. But it may also explain why so many modern-day Premier League English soccer players flop from the brush of contact???

In summary, a low pain threshold may or may not have been so easy a caveman could experience it.