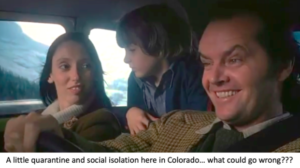 You may never have guessed, unless you’re Stephen King, that social isolation can have devastating effects on animals. We’ve already observed increased psychiatric dysfunction since COVID-19 quarantine began. According to the Centers of Disease Control (CDC), by June 2020 rates of anxiety were three times higher and depression was four times higher than 2019. Virtual learning to avoid in-person schooling has had dramatic impact. By June 2020, early research showed that students who switched from traditional public to virtual learning saw test scores in mathematics and English/ language drop substantially. In the United Kingdom, there was actually a report that young children forgot how to use a knife and fork, and regressed from potty training.

However are these findings simple behavioral adaptions or something deeper and more concerning?

Scientists have recently published a study on zebrafish raised either alone or in groups for periods of time. Of interest, those socially isolated had unmeasurable levels of pth2, a relatively lesser-known peptide in the brain. However when other fish were introduced into the lonely tanks, the pth2 levels raised after just 12 hours to indistinguishable levels of socially-raised fish. There was an extremely tight link between protein expression in the brain and the fish’s environment.

The scientists then took it even further. It was not vision, hearing, taste or smell that changed the pth2 levels. If that were the case, one could argue that turning on a television, playing the radio, or inducing artificial smells could fake animals into thinking they aren’t alone. Instead it was a “mechanosensation” directly affecting pth2. The fish needed to physical feel the swimming movements of neighboring fish.

Pth2 is a neuropeptide that tracks and responds to the population density of an animal’s social environment. Pth2 receptors are found in numerous areas of the human brain as well. Other peptides, such as Tac2 and brain-derived neurotrophic factor, also are found to fluctuate with socialization.

In some human studies, people who are isolating have a smaller than normal prefrontal cortex, hippocampus and amygdala. And these aren’t people who like to be loners, they are lonely. Later in life, these people tend to have worse cognitive function.

When we socially isolate, the gene expression of proteins in our brains change. While quarantined- induced all work and no play made Jack a dull boy, this likely is less dramatic and reversible in the rest of us. It appears that engaging in cognitively stimulating environments, like going to museums, galleries, exhibitions or theatre while socially distanced may be offsetting. But just for reassurance… boutique rooms, like Room 237 of the Stanley Hotel, are closed for winter 2020-2021.