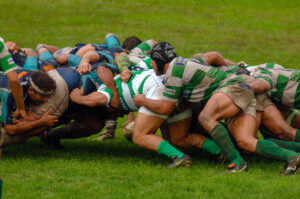 Chronic traumatic encephalopathy (CTE) has recently been highlighted in professional sports, like football, as a neurodegenerative disease caused by repeated head injuries. It is now also being suspected in boxing, hockey, soccer, rugby, etc…, and even youth sports. While it still remains controversial, both significant or seemingly innocuous
impacts could have a major cumulative effect on brain health. CTE has never affirmatively be associated with head trauma.

Assuming CTE is related to head contact, it is unknown if brain microchanges occur stepwise and specifically after each contact, or if there is a steady rate of evolution between contacts. CTE can only be confirmed on autopsy by the presence of certain proteins in the brain, but specialized MRI seems to show alterations which may predict CTE. By comparing contact and non-contact high-intensity athletes, a new study assessed the changes during concussion-free play.

College rugby players were followed in comparison to rowers and swimmers, both in-and off-season. The participants studied specifically denied concussions and this was verified with both practice/game video data and accelerometer gyroscopes the players wore.

The results of the study are perplexing. Brain changes in  contact-sport-players could be related to subclinical impacts or head rotations associated with playing their sport. However it may not be long-lasting or cumulative brain microstructure changes from prior head impacts before the study period, since the changes were more apparent in-season and less apparent out of the season. The results could suggest a component of “brain memory” for microstructure change, just by playing the sport. The contact player’s brains almost “felt the need” to make changes associated with concussion, even if no concussion was occurring.