This week’s blog will completely focus on Thanksgiving and skip the roundabout link to neurosurgery we usually try to include.

“….and he realized as he spoke that the truth was slipping away from him, and soon he would no longer know what the truth was.”
Paraphrased from Leo Tolstoy’s, War and Peace

How did you hear the story of Thanksgiving? How do your kids enact their yearly plays in grade school? Did you think the Pilgrims sailed over on the Mayflower, wearing capotain hats, dressed in black and white, and eagerly greeted by Squanto? Together they cooked a Butterball to celebrate survival through their first cold winter?

In 1608, 102 Protestant passengers left Plymouth England to “seek religious freedom” and escape persecution from King James I. They actually didn’t even call themselves Pilgrims, but instead “Saints”. Like the Puritans, they wanted rid Catholicism in the Church of England, including most sacraments, fancy church architecture and priestly hierarchies. It is solely for these reasons most Americans think their ancestors emigrated.

However, many don’t know the correct sequence, which was that the Pilgrims originally went to Leiden, Holland, where they lived for 12 years. They encountered religious tolerance in Leiden, to a degree almost unheard of in the day, but they found it difficult to maintain their English identity and harder to make a living. Their children were forgetting English customs and unable to find decent jobs as non-citizens. In reality, they wanted to still be English, just have a better and easier living. So they headed to America just like many Europeans had routinely been doing since the 1500s. After all, the first permanent English settlement had been founded at Jamestown in 1607. 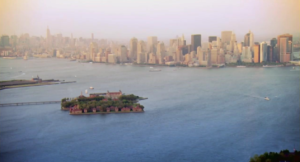 They planned to cross in two ships, the Speedwell and Mayflower, however, the Speedwell struck trouble and they headed back. The 2nd attempt, in 1620, was just on the Mayflower. However, it was the tip of Cape Cod in Provincetown, and not Plymouth Rock, where they actually landed after their 66-day voyage across the Atlantic. A month later they crossed the Hudson to what is now Massachusetts. That was nearly 400 years ago. 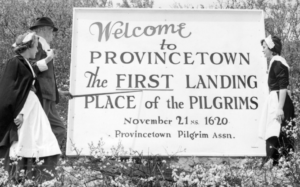 Of course, thanksgiving for Europeans would have been an occasion for religious piety and solemnity, lacking feasting or festivities.

Through the first winter, most of the Pilgrims remained on the ship, suffering scurvy and other contagious diseases. Only about 50 colonists made it until Spring, and in March they moved ashore where they eventually met Squanto, a member of the Patuxet tribe. Squanto was fluent in English because he previously was kidnapped into slavery, brought to London, only to escape and return home. Unfortunately, when he returned, his Patuxet tribe had already died from an epidemic. You can imagine Squanto’s initial hospitality upon encountering a similar crew to his previous captures. In fact, there was a very tumultuous relationship with accusations of theft and mischief on both sides. However, Squanto eventually lived with the Pilgrims and taught them how to grow corn/beans/ squash, extract sap from maple trees, catch fish and avoid poisonous plants. He also helped the Pilgrims forge an alliance with the Wampanoag tribe, which is one of the few examples of initial harmony between European colonists and Native Americans. What became of the Wampanoag tribe, you may ask? Well, just before the Pilgrims had arrived, a smallpox outbreak from contact with Europeans had diminished their numbers. Then 50 years after the Pilgrims arrived, the King Philip’s War occurred, and the colonists killed ~40% of the tribe. What is made of the Wampanoag lands in the present day? This is now Martha’s Vineyard and Nantucket.

In November 1621, after the first corn harvest was successful (that Teosinte corn would have been grass-like with small non-fused kernels… nothing like the Monsanto variety we eat today), the Pilgrims celebrated Thanksgiving with the Wampanoag Indians. It lasted about 3 days and was attended by only a few Wampanoag men trying to negotiate a peace agreement. The menu, as described by Governor Edward Winslow’s Journal of the Pilgrims at Plymouth, included venison and some wildfowl. However, the fowl wasn’t turkey… but likely geese, ducks, partridges, cranes, swans, or eagles. Wild-Teosinte corn would not have been included since it was primarily kept dried this time of year and used for grinding into a meal. No pumpkin pie or cranberry sauce since there was no supply of sugar (Mayflower’s supply dwindled by fall of 1621) and there was sparse wheat flour. Potatoes were not common at that time. Seafood also likely would have been present. 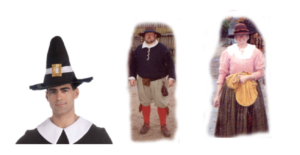 The Wampanoag didn’t wear long headdresses, which is something akin to the Sioux. They may have worn a beaded headband. Only a Wampanoag chief may have worn some feathers. Neither women nor men wore shirts. The women wore knee-length skirts and the men wore breechcloths with leggings. 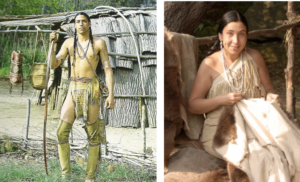 Due to a poor harvest the next year, the Pilgrims didn’t celebrate in 1622.  In 1623, the 2nd Thanksgiving was actually a religious fast due to the end of the drought.

Abraham Lincoln dubbed Thanksgiving a national holiday, November 1863, at the height to the Civil War.  It seemed to be more of a day of mourners and a method to heal the wounds of the nation. Lincoln subsequently scheduled Thanksgiving for the last Thursday in November.  In November in 1939, FDR moved it up a week, in order to spur retail sales during the Great Depression, but this was not taken well. In 1941, it became the 4th Thursday in November. 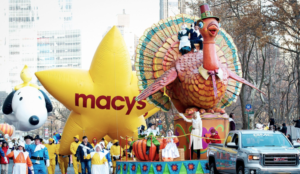 Thanksgiving now centers on cooking and sharing with friends and family.  Our historical ignorance is bliss. Today, nearly 90% of Americans eat turkey… my wife likes Tofurky.  More than 50 million people watch floats and oversized balloons march down the streets of Manhattan in the Macy’s Day Parade. The New York celebration is the most-watched across all America and culminates the now commercialized American Thanksgiving.

But lest we forget, the Purchase of Manhattan occurred not long after that first Thanksgiving.  On November 05, 1626 the Dutch merchant Pieter Schagen paid 60 guilders… $24, to the Lenape Indians.  Accounting for inflation… assuming the Lenape had inflatable accounts… that maybe about $951.08 USD. Many think Schagen ripped off the Lenape in that deal.  The Native Americans got the last laugh, though, because the Lenape didn’t own the land, but were just passing through themselves. The Weckquaesgeeks tribe actually occupied Manhattan and subsequently decimated the unsuspected Dutch colonists.  Just a possible touch of Karma… around the time of Thanksgiving.

With a little more knowledge to wash down your turkey or just a fun story to break the awkward silence if you’re seated next to that weird family member, we at RMBSI wish you Happy Holidays!  But, “Save the neck for me, Clark”