The Brains of the Sea

Most of the earth’s surface is ocean, and many major animal groups that exist today originated in the sea.  Yet only 15% of animals live in the ocean, while 80% live on land.  Quite a weird statistic, raising the question if aquatic animals are evolutionarily inferior?

Dolphins can stay awake for up to a 15-day period, performing tasks without exhaustion.  How is this possible? 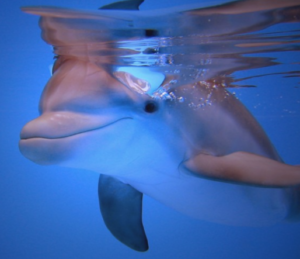 Research suggests that they can sleep with only ½ of the brain at a time, allowing them to remain vigilant and breathe at the surface of water even when half-asleep.  This is termed “unihemispheric sleep”.  Slow waves are seen from the cerebral cortex and thalamus on one side of the brain while the opposite shows awake physiology. One hemisphere maintains sensory awareness and motor control while the other sleeps.  Even during unihemipsheric sleep, one eye is closed while the other is preferentially gazing in the direction of group members, suggesting monitoring the group maintains cohesion, but also allows constant evaluation of the environment for predators. 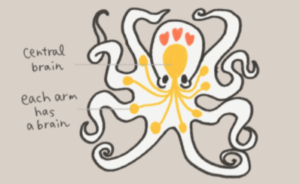 Possibly even more amazing is that octopuses have 9 brains.  Yes… NINE.  There is a central brain, and each of its 8 arms has a mini-brain allowing it to act independently.  The central brain of about 180 million neurons sends fine-tunes each arm, which itself has another 40 million neurons.  Of interest, the octopus doesn’t know where its arm is unless it can see it.  This is much different from humans, who use part of the spinal cord, the dorsal columns, to monitor our bodies in space even with our eyes closed.  It’s our cerebellum that coordinates visual input with movement.

Turns out this is advantageous to the octopus (invertebrate without a spinal cord) since their body shape is fluid and constantly changing, making a “fixed map” of their body dangerous.  Octopuses use their arms to make shelters for protection, even acquiring items to be used as tools.  If it loses an arm, it can regenerate with its min-brain in about 100-130 days.  Several land-based animals can regenerate appendages, but usually not as good as the original.  An octopuses arm is indistinguishable from the original, with a new set of 40 million neurons.