The Existential Threat… and Neurosurgery

One of the hottest media topics (pun intended) over the last few years has been the effects of climate change on earth, the potential causes of those changes, and what we can do about them.

Climate change traditionally has been assessed by taking specimens from the earth. A hollow tube is sunk deep into glacial ice and samples are removed. It’s a chilly ledger of events… new snow lands on old snow, compressing over time into ice formations that keep millions-year-old records. Just about anything that went into the atmosphere is recorded in the ice. Just like a prehistoric mosquito trapped in amber… dust, air bubbles, sea salt, ash, and soot can be trapped in glaciers for eons. Who knows… maybe even Hoffa is somewhere in there. CO2 can be recorded as well as an estimate of temperature in an oxygen isotope called 180. Right here in Colorado, the National Ice Core Laboratory (NICL) warehouses many of these samples, being a facility unlike any other in the world, since its construction in 1993. Scientists from all over the planet send frozen samples to our local facility where they’re stored in meter-long chunks at 36 degrees Celsius.

The punchline, however, is that these ice cores need to stay frozen while we study them. The NICL’s most important responsibility is the safe and secure storage and curation of ice cores. In November 2017, the Denver facility sent out an open letter seeking ideas to either modernize or find a new facility. The main archive freezer was at its end of useful life and, “utilizes refrigerants that were phased out under the Montreal Protocol”. Turns out, the NICL was using hydrochlorofluorocarbons (HCFC) as the refrigerant to keep the freezer cold. What is HCFC???

It’s essentially Freon… One kilogram of some HCFCs has the same greenhouse impact as two tonnes (metric) of carbon dioxide, which is the equivalent of running your car for six months. Our ice core lab in Denver, created to help study the deleterious effects of greenhouse gases, was powered by extremely potent greenhouse gases. And due to its research, the facility helped outlaw its own power source, which stopped being produced and imported to the US in January 2020. Sometimes you just can’t make this stuff up…

Well, ya got trouble, my friend, right here in Denver Colorado
The trouble with a capital “T”
And that rhymes with “F”
And that stands for Freon!

Adapted with an artistic license from The Music Man

The science behind climate change revolves around the connection between atmospheric carbon dioxide- CO2, a greenhouse gas, and temperature (again, prior earth temperatures can only be estimated by 180). When one goes up, the other one invariably follows. The question is which comes first… and herein lies the debate argued in recent politics. If the temperature goes up first and then CO2 follows, then our carbon emissions may be less relevant… go ahead politicians, and fly your private jets to the Glasgow Climate Summits in 2021. However, if CO2 goes up first and temperature lags, then we may need to rapidly lower our carbon footprint… you may have to walk to the United Kingdom from your New York 14th congressional district.

CO2 skeptics point to the EPICA DOME C ice core from the Antarctic Plateau, which is the oldest ice core in existence. The core is representative of the last 800,000 years, including the last ice age between 20,000 and 10,000 years ago. What it shows is somewhat confusing… The concentration of CO2 was fairly stable over the last millennium until the early 19th century (CO2 rises and falls, even without human interference, due to exchanges of carbon amongst the biosphere, atmosphere, and ocean). There have been times with CO2 levels much higher than now, including the Eocene period, about 55 million years ago. The planet was warmer at that time… no apocalypse ensued. And while temperatures may be warmer recently, compared to the past 2,000 years, they are still cooler than prior periods, like the Holocene era around 11,000 years ago. In fact, the current CO2 concentration is nearly 40% higher than before the industrial revolution, yet we’re not at our “hottest” period in history, which is huge for climate change. 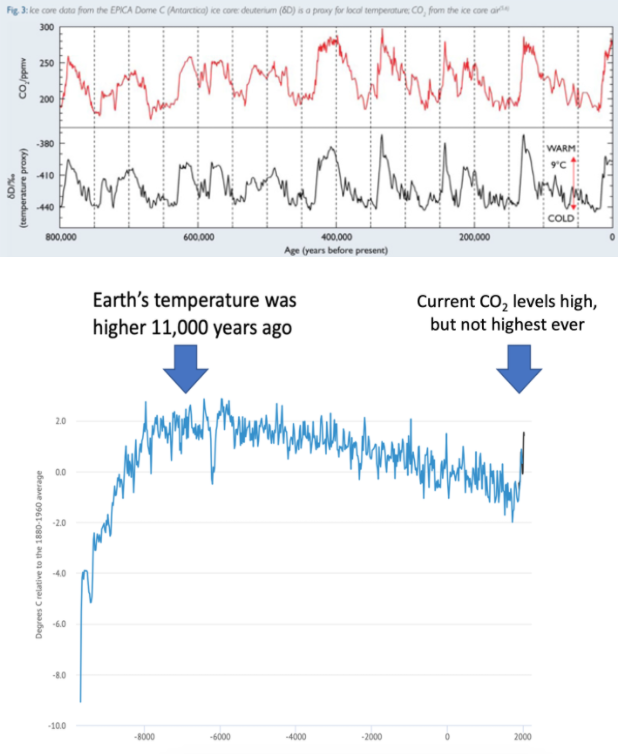 So what does this mean for us now?

To summarize with an Edward Witten quote, “We know a lot of things, but what we don’t know is a lot more”.

The human contribution to climate change will unlikely hasten Doomsday… we are more likely to be wiped out by artificial intelligence… just watch Terminator. But the only meager option at our disposal is to try limiting our CO2 emissions. CO2 may have reached levels exceeding 1000 parts per million (ppm) in the distant past, but CO2 likely has not gone above 290 ppm in about the last 650,000 years. It’s about 412 ppm currently.

So why all this carbon footprint mumbo-jumbo in a neurosurgery blog? 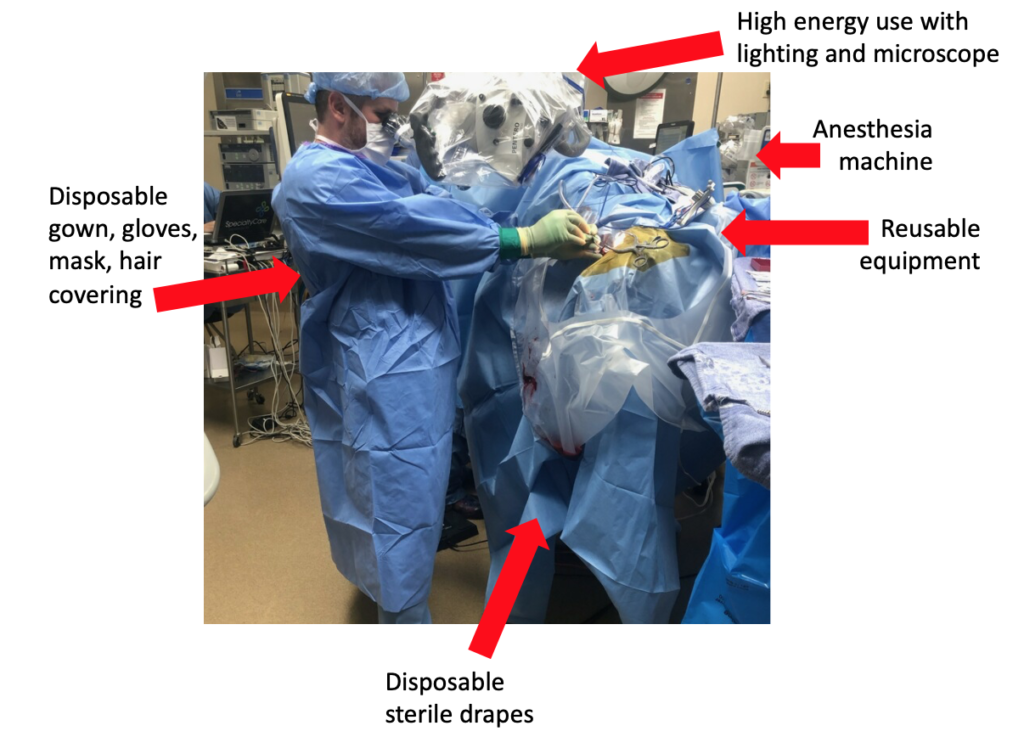 The intersection of surgical care and carbon emissions has received little attention. As we try to give more people access to healthcare globally, including surgery, our associated carbon emissions will explode. In the US, the health care system generates 8-10% of all greenhouse gas emissions. (Of note, the largest share of greenhouse gas is transportation, primarily for cars, trucks, ships, trains, and planes…only 1.6% of 2019 new vehicles were hybrid or electric… the Green New Deal encourages more roads and driving). If the health sector globally were a country, it would be the 5th largest emitter of carbon. Anesthetic agents used for surgery in high-income countries, including nitrous oxide or desflurane, are greenhouse gases. The global effect of a single general anesthetic may be equivalent to releasing ~ 22 kilograms of CO2 into the environment. The worldwide use is about equivalent to the CO2 emissions from 1 million cars. From the carbon standpoint, we may be better off anesthetizing patients with muffler exhaust instead of an anesthesia machine. Operating rooms use three to six times more energy than the rest of a hospital, mainly due to the ventilation and temperature control to maintain sterility, even when they’re empty. In some surgical specialties, including neurosurgery, single-use plastic devices are employed, instead of reusable metal devices. While reusable devices are generally considered better, the energy source cleaning or manufacturing them may still leave a large greenhouse-gas residue. The annual carbon footprint of operating rooms may range from about 3218 – 5187 tonnes of CO2 equivalents, lower those tonnes could be beneficial in the fight against climate change.

Another major cost, both environmentally and economically, comes from unused surgical supplies. Especially in neurosurgery, the surgeon needs many items available for immediate access if a complication arises. The vast majority of the time the procedure progresses smoothly, so the unused supplies are wasted… just thrown in a landfill. Operating rooms produce 20-30% of a facility’s waste, with 1/3rd being biohazard.

In other circumstances, even reusable equipment like spine screws sets, need to be opened for partial use but then be re-sterilized for future surgeries. 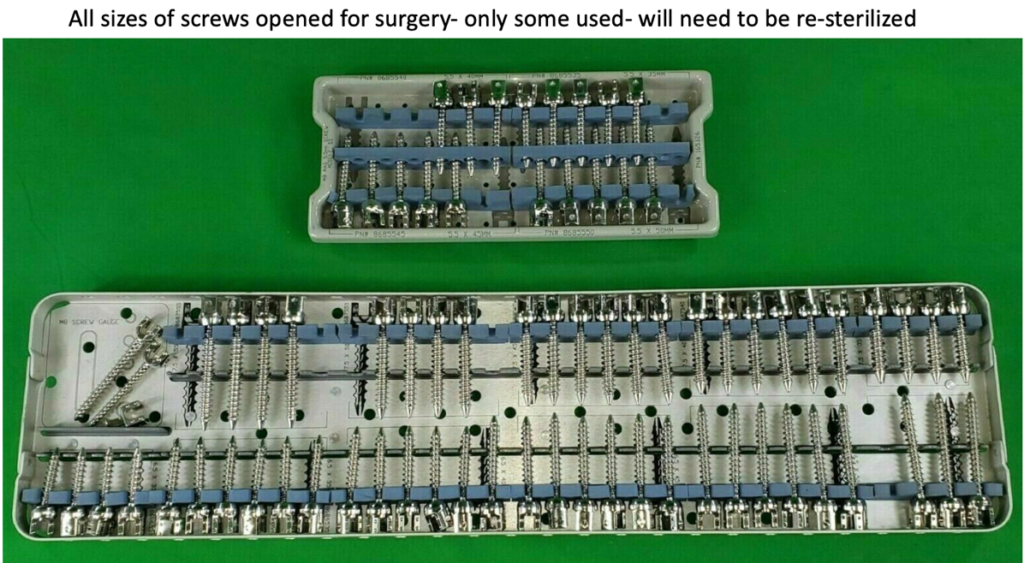 At some institutions performing complex neurosurgery, approximately $2.9 million of operating room waste is created annually. Surgery is the most energy- and waste- intensive specialty in health care. Some politicians have plans to upgrade every existing building in the United States, but essentially no plan for the wealthy nation health care industry to adopt environmentally sustainable solutions. To find more news like this click here!