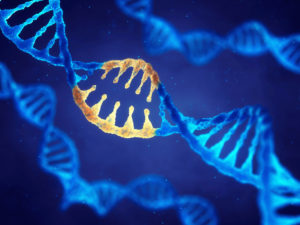 Recently, it has been found that some patients have a genetic predisposition to pain freedom. Most patients mention, “I have a high pain tolerance”, but some actually have the DNA to support this.

A case report was recently written in the British Journal of Anesthesia describing a genetic alteration allowing pain freedom.1 A 66 year old female underwent numerous surgical procedures, which usually induce pain, yet she reported minimal complaints and required essentially no pain medication. While some of her family did not share this trait, she had a son with a similar predisposition.

Genetic testing was performed which showed she had a very specific gene mutation, consisting of change in her fatty-acid amide hydrolase (FAAH) gene. Fatty-acid amides (FAAs) are endogenous cannabinoids (essentially, natural pain medications) in our bodies. When the FAAH enzyme is absent or mutated, there are more FAAs in the body, which leads to analgesia to painful stimuli. Interestingly, testing of this patient’s family members who were not resistant to pain, did not have this FAAH mutation. But her son, who was resistant to pain, did demonstrate a partial mutation.

FAAH mutations are associated with a decreased need for pain medications, increased postoperative nausea with narcotics, and decreased anxiety-linked behaviors. It is difficult to know how many people in the general population have this mutation, and it is likely other similar gene mutations could provide the same result.

References
• Habib A. Microdeletion in a FAAH pseudogene identified in a patient with high anandamide concentrations and pain insensitivity. BJA. 2019.

Adam P. Smith, MD, FAANS is a board certified neurosurgeon and operates Rocky Mountain Brain and Spine Institute as his own private practice. He is committed to the wellness of each patient. Dr. Smith uses minimally invasive surgical approaches for the brain and spine, and uses the most up-to-date neuroimaging, surgical navigation, and robot modalities.

Is Gaming A Gateway To A Career In Neurosurgery?
January 13, 2020

Will Dr. Google Give Me Good Medical Advice
January 6, 2020

Caution with a Cranioplasty
December 16, 2019

One of These Days You Should Get Help For That Procrastination and Neck Problem…
December 9, 2019