The Perception of Neurosurgery

The vast majority of Americans feel correctly informed by the media, whether through reading or watching television.  More than 80% of people think the press ensures its consumers have the knowledge to be informed.  However, in recent analyses, only about 9% of Americans surveyed, “showed an understanding” of basic healthcare.  And while 96% of people prefer to be offered choices and have their opinions solicited, only 52% prefer to leave the final healthcare decision to their physicians.  People feel the need to have trust in their neurosurgeon. 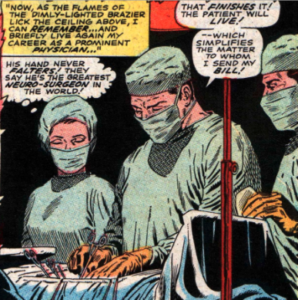 So where would someone learn about neurosurgery and a neurosurgeon?  Who are the people making holes in skulls and surgerizing spines?

The media has both fanaticized and glamorized the perception of neurosurgery.

Being a superhero is hard work, but most needed to also hold down a day job to keep their superhero lives afloat.  Flash was a police officer and forensic scientist.  Spider-Man was a photographer.  Superman was a newspaper reporter.  Hulk was a nuclear physicist.  Wonder Woman was an army nurse.  Wolverine was a teacher.  Batman and Iron Man were primarily just a billionaire socialites.  Most of the other superhero’s were well-received citizens in society.  However neurosurgeons were pictorialized by Doctor Strange.

Doctor Strange wasn’t named such, as an adjective, although that may have been more appropriate.  Doctor Strange was neurosurgeon, Dr. Stephen Vincent Strange, MD.  His persona was as unflattering as a hockey player’s smile.  Acclaimed, but arrogant, he appeared in Marvel Comics in 1963.  His interest in his patients began and ended at his bills.

Just like common mythological tropes, the protagonist rises but then quickly falls.  Dr. Strange severely injures his hands in a car crash, so he could no longer operate.  He resorts to performing botched procedures, ending his successful surgical career. 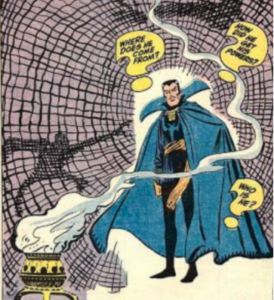 When modern medicine failed, he traveled to Tibet.  A sorcerer, the Ancient One, refused to cure him, but agreed to teach him mysticism.  He became a Master of the Mystic Arts, and returned to the United States, fighting with/ against various other superheroes, abandoning his neurosurgery career.

This perception of neurosurgeons as arrogant and cold-hearted is pervasive.  This isn’t helped by the saying, “Well, it’s not brain surgery”.  But, truth be told, there is likely a component of hubris required to enter the field and carry the risks of operating on the brain and spinal cord.  However neurosurgeons typically have extreme empathy for their patients, and this has been reflected in patient-perspective studies.  According to research, patients seeking a spinal surgeon tend to favor the “neurosurgeon- scientist”, valuing research.

Around the same time Steve Ditko was developing Doctor Strange for Marvel, ABC aired the medical drama, Ben Casey, spanning 1961 to 1966.  (Ben Casey was also a daily comic strip and paperback novel).  In contrast, Dr. Ben Casey was an idealistic neurosurgeon, portrayed as gifted and caring. 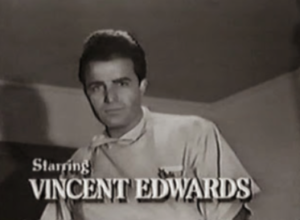 However the show still scandalized neurosurgeons as having a cowboy demeanor… alpha males for whom the rules don’t apply… maybe a bit of charlatanism.  In many episodes Dr. Casey performed risky surgery and sometimes treated without consent.  Later episodes demonstrate him perpetually jeopardizing his career, having controversial surgical indications.

The Ben Casey show personified the, “neurosurgeons think they’re to God” guise.  “Man.  Woman.  Birth.  Death.  Infinity”, was its weekly slogan.  Neurosurgery is serious, and the show wanted you to know it.  It’s the surgeon’s way or the highway.  However while neurosurgeons commonly have a hint of narcissism, they are typically collaborators and rule-followers, while being master executers of precision.  Of any medical specialty, a neurosurgeon intimately works with neurologists, oncologists, radiologists, anesthesiologist etc… to treat patients.  Neurosurgery cannot exist as an island.  Furthermore, algorithms of neurosurgical treatment is becoming more prevalent such that there is far less controversy and proven efficacy in our procedures than ever before.

The most recent neurosurgical star in the entertainment industry was Dr. McDreamy, Derek Shepherd, in Grey’s Anatomy.  Funny, warm, and altruistic were features not previously ubiquitously synonymous with neurosurgeons before 2005.  And he saved all those kids!!!  While most would like this to be the archetype, it clearly was too much ivory-tower fiction, which is likely why ABC killed him off in season 11. 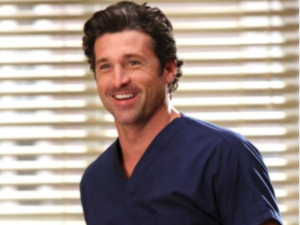 Outside of the entertainment industry, studies have assessed circulating news stories of real neurosurgeons.  Over a thousand articles, comprising over 500 unique stories about neurosurgeons were published spanning 2012 to 2017.  Of these articles, 26.9% were “positive”, 35.4% were “negative”, and 37.7% were “neutral”, in terms of their reflection on the field of neurosurgery.  An even more vicious story was “Dr. Death”, highlighted in a recent podcast in 2018.  The only case of its kind in recorded history, the story of Christopher Duntsch captivated, yet frightened the bejesus, of many people regarding neurosurgery and the overall regulation of medical practice in our country.  Of course, Dr. Death was not a board certified neurosurgeon, and no other surgeon has ever been found guilty of similar offenses.  This podcast is not remotely representative of the field, and is an extreme exception.

Neurosurgeons and neurosurgery are naturally a subject of media coverage.  It’s a particularly intriguing field, inciting great fascination.  However while most neurosurgeons in our country and around the globe are highly intelligent, accomplished, prudent and empathetic physicians, the prevailing residue left in the publics mouth traditionally hasn’t been overwhelmingly positive for unclear reasons.  As medicine in general has sought more “down to earth” medical students, hopefully more future neurosurgeons will be thought of affectionately.  Dr. Ben Cason, MD, a retired pediatric neurosurgeon working as the 17th Secretary of the US Department of Housing and Urban Development has likely been a pioneer in reputation repair.  (Many would also argue for Dr. Sanjay Gupta, MD with CNN.)  Who wouldn’t like a guy closing a political debate: