The Catholic Church recognizes at least three different Saints named Valentine or Valentinus, all of whom were martyred. Some think the day commemorates one of the Valentines’ death. However, others think the middle of February was chosen to challenge the pagan celebration of the Roman god of agriculture. Lastly, February 14th was thought to be the beginning of birds’ mating season, so it may have been chosen in the Middle Ages to celebrate romance. In 1382, Chaucer’s poem, Parlement of Foules, first penned the association with, “every bird cometh to choose his mate” on “seynt Voantynes day”. Thereafter, wooing notes and courting verse were composed. By the 1700s, tokens of affection were exchanged. It was Richard Cadbury in the 1800s who made chocolate economical to the middle class. He invented the heart-shaped box to entice sales in the United Kingdom. At the turn of the century, Milton Hershey commercialized drop sized “kisses”, so-called because manufacturing chocolate made a “smooching” noise. The next major commercialization came right here in Denver. In 1923, Clara Stover made candies in her personal local kitchen. She and her husband, Russell, later moved to Kansas City, selling their chocolates wrapped in heart-shaped boxes across the Midwest. Their biggest seller became the “Secret Lace Heart”, cornering the market.

Most English-speaking countries now have traditions of giving a box of chocolates on Valentine’s Day.

Since the times of the Aztecs, chocolate was thought to be an aphrodisiac. There has been suggestion that women who eat chocolate show more romantic desire than those who refrain. Cacao contains flavonoids which have antioxidant, anti-inflammatory, anti-atherogenic, anti-thrombotic, antihypertensive and neuroprotective effects. Methylxanthine is a biogenic cannabinoid-like fatty acid that may have psychoactivity. Tryptophan is a building block of serotonin, involved in sexual arousal. Phenethylamine is similar to amphetamine. The synergetic effects of all these substances may influence sexual health and function. However, truth be told, the amounts are likely too small to have any measurable effect on passion or desire. More organized research seems to show no significant differences in sexual arousal amongst chocolate eating women versus those who consume none. In studies comparing blindfolded women and men, all feel better consuming chocolate, meaning there’s no gender difference, and more broadly, people just like chocolate because it tastes good.

However whether or not chocolate helps aim Cupid’s arrow, it surely has an effect on the brain.

Dark chocolate, which has the highest flavonoid content, improves cognitive function specifically in attention and working memory. There are notable changes in brain electrical activity about 30 minutes after dark chocolate intake. It may even help reverse age-related memory decline or provide a neuroprotective role on cognitive performance.

The reason may have to do with chocolate increasing cerebral blood flow. In a 2017 study, participants ingested 900 mg of flavanols every day for 3 months, resulting in increased blood flow to the hippocampus, which is involved in learning and memory. The only caveat is that you’d have to eat about ten bars of dark chocolate every day to get the 900 mg of flavanols. Since milk chocolate has less flavanols, at about 15 mg per bar… well you do the math. Vegetables and legumes have small amounts, but even less than any type of chocolate. 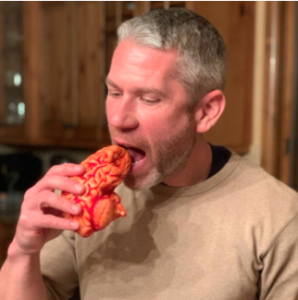 So if Valentine’s day is associated with chocolate gifts, and chocolate may improve brain function, what a better combo than a brain made of chocolate?

I recently chose a right cerebral hemisphere, since right-brained people are more visual, conceptual, imaginative and sensual. It clearly shows the mesial temporal lobe, including the hippocampus, where the flavonoids target. The seventh cranial nerve is also represented, where the sweetness is sensed from the anterior 2/3rd of my tongue. It’s a gift, anatomy lesson, and scrumptious desert. It seems a bit hefty on the calories… but aren’t calories just “delicious points”?