The True Power of 3 AAA Batteries… 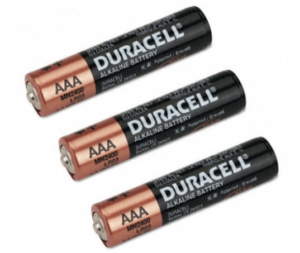 AAA batteries have been around since the 1950s and are most often used in low-drain portable electronic devices… TV remote controls, digital cameras, etc… In fact, they may have been invented solely to allow Kodak and Polaroid cameras to be smaller sized. They are such low power that an AA battery has three times their capacity. Not much is usually thought of the AAA. They may be the lowest on the galvanic totem pole. 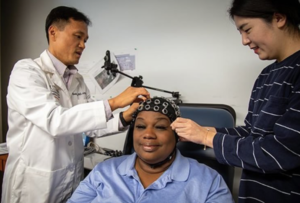 This study is focusing on knee arthritic pain and will run through 2022. However, the concept could easily later be extrapolated to spine pain.

Transcranial direct current stimulation has been used in multiple pain conditions beyond musculoskeletal pain, including fibromyalgia, neuropathic pain, and stroke-related pain. It typically targets the primary motor cortex. This seems paradoxical since the sensory cortex usually perceives sensory stimuli, including pain. We tend to narrowly typify the motor cortex being involved in just movement initiation. However, the primary motor cortex functions far beyond just this, and seems to relate pain with emotional processing. Noninvasive brain stimulation (transcranial direct currents) of the motor cortex can revert abnormal brain changes (neuroplasticity) associated with chronic pain. In layman’s terms, the stimulation may help reorganize and normalize how the brain changed due to chronic pain and promoted the pain.

For otherwise non-surgical spine pain, the options include medications, physical therapy, acupuncture, cognitive therapy/ mindfulness, and surgical pain procedures. The estimated annual cost of pain medications for chronic pain is about $17.8 billion. The cumulative cost of chronic pain, including all conservative avenues, is about $638 billion, which is more than the cost of cancer, heart disease, and diabetes. From a surgical perspective, we already use devices like spinal-cord stimulators to try to reduce this cost. However spinal cord stimulation requires an initial implantation surgery and then repeat surgeries to replace the battery over the years. The spinal cord stimulator battery costs between about $30,000 and $60,000

This transcranial electrode cap is worn on the scalp for fifteen, 20-minute sessions, over a three-week period. It is completely non-invasive and temporary. A four-pack of AAA batteries costs about $2.99.

Transcranial direct current stimulation may be a subtle revival of the AAA battery. Improving someone’s pain is real power… maybe not galvanic, but more than you’d expect for just $2.99.