Vaccines Against Infections or Tumors – Is Our Biggest Outbreak, “A Lack of Understanding”? 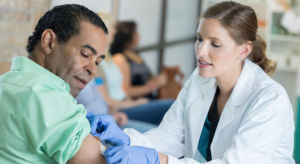 Worldwide, nearly 80% of people who have heard of vaccines say they “strongly” or “somewhat” agree that vaccines are safe. However, 28% of Americans do not think they are, including 11% who strongly disagree they are safe. U.S. parents are about twice as likely as nonparents to believe vaccines are harmful. Luckily, about 93% of U.S. parents still say at least one of their children has been vaccinated, suggesting their doubts may not prevent them from inoculating their kids. But that means ~7% of our nation still resists vaccination to some degree. For a population to achieve herd immunity (enough of the population is immune so a disease cannot spread), the immunized number needs to realistically be close to 80-95%. 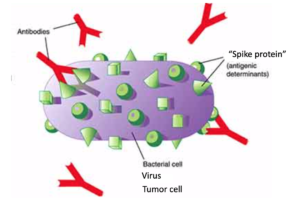 What even is a vaccine?
A vaccine is a medicine that stimulates the immune system to produce antibodies against a disease, usually while avoiding symptoms from the disease. Antibodies, termed immunoglobulins (Ig’s), are proteins produced by the immune system to attack foreign material. The antibody binds some sort of marker on the surface of the invading material (antigen- “spike protein”). It is this battle when the body’s antibodies attack the foreign antigen, which causes the symptoms of being sick— you may have heard the term “cytokine storm”. When one receives a vaccine, though, they are given either a killed or weakened foreign material, so it’s a small battle with little immune response, and the patient usually doesn’t notice any symptoms. (Unfortunately, some people still generate a larger battle, do get sick, which leads skeptics to be fearful of vaccines—this is what happened in the 1950s with the Sabine versus Salk polio vaccines, the 1960s measles vaccine, and the 1960s RSV vaccine). Usually, after getting vaccinated, immunity develops, meaning the antibodies perpetually patrol the body to prevent that disease from ever attacking again.

In contrast, if we never relied on vaccination, the immune system would still generate antibodies to combat a new disease entering the body. However, the immune response would be fighting the uninhibited disease front… a much larger battle… which sometimes causes severe sickness. Of course, naturally experiencing the disease produces better immunity than vaccination in most cases, but natural immunity can be more dangerous or even deadly. 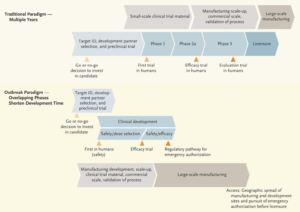 Why does it take so long to produce a vaccine?
Treatment is given to sick people, while vaccines are given to healthy people to prophylactically prevent sickness. During vaccine trials, it takes time for the study patients to develop the antibodies. It’s not like the participants receive a drug that defeats a disease, and the response can immediately be measured. It takes much longer to see if the vaccine allows the body to produce the defense.

Just as with FDA clearance for other medications, the proper trials ideally are performed first. However, vaccinations are highly scrutinized in this country, and previously rumored to cause conditions like autism (The Lancet retracted the flawed 1998 paper linking autism to MMR) and seizures (This immunologic link has never been unraveled). Everyone is always “cautious” with medications, but the vaccine guys are probably a bit skittish.

Despite this, the government seems to preemptively be manufacturing SARS-CoV-2 vaccines prior to trial completion in anticipation of possible success and to avoid delays in dissemination.

Why aren’t all vaccines completely effective?

Sometimes, the vaccine is created against the wrong strain of the disease, so the antibodies produced don’t target the real threat (this is what sometimes happens with the yearly flu vaccine). Other times, the disease mutates, or changes, so there is a new target antigen different from the one the manufactured antibodies were supposed to attack (this is discussed more below). Sometimes, the attenuated exposure to the disease doesn’t allow the immune system to generate enough of a response, so protective antibodies are not formed (this is partially why we need repeat MMR and tetanus vaccines over time). Sometimes our immune system forgets about a disease, so it cannot respond quickly enough to prevent infection once exposed again (this is the other part for why we need “boosters”).

Historically we think of vaccines working against infectious diseases. We have vaccines against bacteria, which are microscopic living organisms. Tetanus, bacterial meningitis, Haemophilus influenzae, and Strep pneumonia are examples. However, again, a vaccine works by stimulating the immune system to create an antibody against a specific target on the surface of the foreign invader. In bacteria, which are living organisms rapidly changing, there are thousands of different strains of similar bacteria (different targets) exponentially being produced. And bacteria are smart, producing their own defense mechanisms against their destructors. So creating a vaccine against another living organism that is changing its target and creating a defense, is nearly impossible. This is also why bacteria can become resistant to antibiotics. On the other hand, viruses are not living organisms. They are just proteins surviving off our living cells, and usually have only a handful of targets. Viruses are the most common infectious disease prevented by vaccines.

So why don’t we have vaccines against all viruses?
For one, it’s economic. It usually takes around 10 years and more than $1 billion to develop a vaccine. (Even the Ebola vaccine, which was accelerated, still took 5 years). Vaccines don’t monetarily cost that much for the patient, so there’s little economic incentive for companies to produce vaccines. Vaccine revenues constitute ~1.5% of global pharmaceutical sales. Two, certain virus epidemics end before vaccine development completes. This occurred with Zika, and to an extent with Ebola. Third and lastly, HIV is a virus that mutates very fast (somewhat like bacteria) and therefore has no current vaccine. By the time a vaccine could be developed for HIV, the viral surface changed shape too much for the vaccine-created-antibodies to lock onto it. The vaccine becomes completely outdated and ineffective. HIV mutates as fast in one day as the flu virus does in a year. However, viruses like HIV also have other features resisting vaccines. The HIV genes, upon entering a cell, integrate into the host cell’s genome making it invisible to the host’s immune system (hides its target). Lastly, HIV isn’t very immunogenic… it isn’t sexy enough for our immune system to want to mount a response.

Where does SARS-CoV-2 fit into this?
SARS-CoV-2 is a virus that doesn’t seem to mutate as much as HIV, and it doesn’t seem to integrate into the cell’s genome to be camouflaged like HIV. Coronaviruses are sexier, and human immune systems seem to want to mount a strong response. So that would indicate a vaccine should be pretty achievable, right? Not so fast, Kowalski. Vaccines against SARS-CoV-1 following the 2003 SARS outbreak were not successful, as the vaccine paradoxically caused a larger immune response than the disease itself, making the vaccine dangerous to humans. It is unknown if the same result will occur this time around, but at least 10 developers have plans to attempt one. The earliest release would probably be sometime in 2021. It should be noted, though, that SARS viruses are RNA viruses, and no company has ever commercially produced RNA vaccines to date, let alone to the scale necessary for this current COVID-19 outbreak (~ 8 billion people could benefit from this vaccine). Additionally, while the SARS-CoV-2 gene has been sequenced, the target antigen (“spike protein”) for a vaccine has not yet been determined. Lastly, it is unknown if a vaccine would cause immunity to COVID-19 or how long it would last. Will a single-dose vaccine be good enough?

It should be highlighted, that a vaccine would not help anyone already infected with SARS-CoV-2.

But why would a neurosurgery blog be discussing the intricacies of immunology or vaccination?
You’re probably saying, “Stay in your lane, bro”… On the contrary, analogous to the tribulations of vaccinating against a rapidly mutating bacteria or virus, failed attempts have been made to treat glioblastomas with immune response and vaccine. 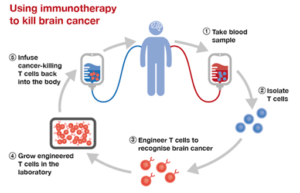 Glioblastoma (GBM) is the most common type of primary brain cancer, with an average survival of fewer than 15 months, despite decades of research in surgery, chemotherapy, and radiation therapy. Cancer immunotherapy involves activating the patient’s own immune system to recognize and destroy cancer cells, just like an infection.

However outcomes of immunotherapy and vaccines to treat GBM have been disappointing, and we see similar issues as observed with resistant bacterias or viruses. For one, the target on tumor cells has been difficult to isolate. Certain “spike proteins” were thought to have been found, but it turns out they are not expressed on every single tumor cell for some reason (Well… the reason is probably that brain tumors are really a conglomeration of many different tumors, all with different genetics… bummer). Two, GBM cells rapidly mutate, maybe not as much as HIV, but still creating a constantly moving target. Third, and unique to brain tumors, the immune system is fairly well blocked from the brain. Something called the “blood-brain-barrier” was evolutionarily beneficial in blocking toxins from harming the brain but evolutionarily harmful as immune cells have difficulty penetrating. Fourth, the immune cells in the brain are a different mix from those in other organs. The composition of immune cells doesn’t readily generate an immune response since these tumors aren’t sexy enough to them, like HIV. Fifth, GBMs have their own mechanisms to suppress an immune response in their vicinity. Not only does the tumor secrete chemicals blocking a battle, they over-activate the metabolism of immune cells making them too “exhausted” to perform their intended function. Even if the immune cells were implanted around the tumor, they are paralyzed by the tumor. Lastly, many brain tumor patients are already on steroids as a treatment for the tumor swelling. The steroids suppress an immune response.

Strategies are being deployed to overcome the shortcomings thus far and sensitize GBMs to immune therapies and vaccines. Medications are infused to enhance a local intracerebral immune response. Viruses are even injected into the tumors to weaken them, as well as to enhance the immune response. Individualized therapy is being used to isolate one patient’s tumor cells, find a “spike protein” most immunogenic for that person’s cancer, and then train their immune cells to attack.

Not surprisingly, there is little patient resistance to brain tumor immunotherapy or vaccine development.

As the infectious disease scientists try to develop a vaccine for SARS-CoV-2, neurosurgeons eagerly sit by to see if this research shines new insight in treating brain cancer. Regarding vaccine treatment in 2020, at least some progress is inhibited by both patient’s and scientist’s, “lack of understanding”.