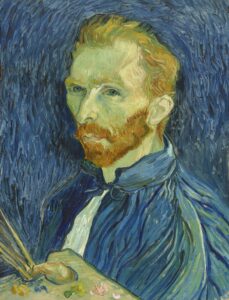 Many of the most famous painters of all time have come from the Netherlands.  Rembrandt, Vermeer… and of course Vincent Van Gogh. Having started painting at the age of 27, Van Gogh died at 37 years old.  He created about 2,100 works, with most in the last two years of his life.

Possibly his most famous works were painted during his time in the French insane asylum.  He had tremendous mental derangement.  He was known to ingest intoxicants and suffered delusions and hallucinations.  It was after the ear incident, in which Paul Gaugin may have cut off his ear (he probably didn’t self-mutilate), that Vincent voluntarily admitted himself to the Saint-Paul-De-Mausole asylum in Saint-Remy-de-Provence France.

However, Van Gogh may have also suffered from epilepsy.  In May 1889, the asylum’s physician, Dr. Peyron, wrote,  “I consider that Mr. van Gogh is the subject of attacks of epilepsy…”.  He had sudden paroxysms of terror, nausea, tonic spasms of the hand, blank stares, and temporary loss of consciousness.  While in Saint-Remy, he composed Starry Night.

Starry Night depicts the view from his asylum room of a cypress tree and the Alpilles mountains, with the addition of an imaginary village.  He wrote his brother, Theo,  “Through the iron-barred window, I can see an enclosed square of wheat… above which, in the morning, I watch the sunrise in all its glory”. 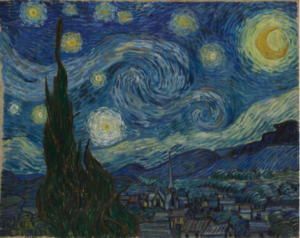 While it was known that the staff did not allow him to pain in his bedroom, he did have the freedom to leave the hospital’s confines to paint.  He was able to make the sketch about 21 times from his room, and then paint later, making newer variations on previous versions.  In none of the versions does he show the bars on the window of his room, and in many versions, there is no village.  Most versions have the swirls in the sky. The only non-realistic elements of the painting are the village and the swirls in the sky.  Of interest, van Gogh thought this piece was a “failure”.  “All in all the only things I consider a little good in it are the Wheatfield, the Mountain, the Orchard, the Olive trees with blue hills, and the Portrait and the Entrance to the quarry, and the rest says nothing to me”.

The sky with the swirls was imaginary and seemingly unimportant to the artist, yet this part captivates many regarding the piece.  Because of his psychological issues, one cannot help but wonder what went on in Vincent’s mind during the painting.   Many have interpreted the swirls as van Gogh’s interpretation of galaxies or the cosmos as a dynamic place.  Others see the associated stars, like the cypress, as a symbolizing death.  Not long after did he shoot himself in the chest.  Physicists have compared the expression of turbulence in the sky to whirlpools and air streams, drawing a mathematical parallel to communicate personal agitation.  Pathologists have postulated they could be related to him taking too much digitalis, for treatment of his epilepsy.

Digitalis is still used today for the treatment of certain heart conditions but previously was used for seizures. It is very rare, but some people taking digoxin can experience haziness in vision, or a yellow tinge to everything they see, called xanthopsia.  Occasionally, points of light may have colored halos around them.  Of course, Vincent also imbibed in absinthe and turpentine, which can both affect vision too.  He seemed to have a “yellow period”, depicted in other paintings as well.  But there’s more yellowness in the stars, as opposed to the swirls, which seem to be a completely separate phenomenon. 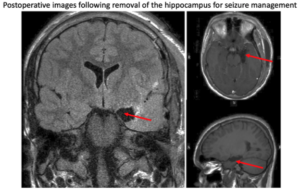 Van Gogh’s Starry Night swirls seem to bizarrely mimic the coronal, or cross-section, view of the human hippocampus.  This part of the painting may be a subconscious anatomical hallucination of his seizure focus. 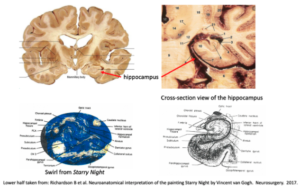 Some modern-day artists discuss their talents seeding from a particular ailment, or even drug use.  It makes you wonder the type of paintings van Gogh may have eventually created, or if he would have committed suicide, had a neurosurgeon been able to remove his hippocampus.  Again, Starry Night was completed around 1889.  Dr. Hughlings Jackson, a neurologist, first described temporal lobe seizures in his patients around 1888.  Sir Victor Horsley performed the first craniotomy for seizures in 1886 in London.

Just a decade earlier, many prominent French impressionists moved away from Paris to London, to avoid the Franco-Prussian war of the 1870s.  Had there been different circumstances, or van Gogh had been less of a recluse, or his brother Theo did not have a gallery in Paris, he may have settled in London and met a capable neurosurgeon.  However the colors there would not have satiated him for long… van Gogh moved to southern France due to the bright colors in Arles.