Why the Grinch Stole Christmas… From a Neuroscience Perspective.

Dr. Seuss’s iconic tale of the Grinch is a perennial favorite. But is there a neuroscience explanation for why the Grinch stole Christmas? Some would argue a psychological malfunction. It’s pretty clear he was a bit of a sociopath. Even though the Whoville paradise was just outside his cold mountain lair, the Grinch was simply lonely, both physically and socially. Brain MRI studies comparing lonely and nonlonely people show that those with a sense of social isolation appear to have a reduced response to things that make most people happy, and a heightened negative response to human conflict. It simply drove the Grinch sour to see the Whos of Whoville happy and he maladapted with stealing. Psychotically depressed people are three times more likely in society to commit a violent crime, although the vast majority of people with depression commit no crimes at all.

Dr. Seuss mentions the Grinch has some unusual anatomy too, which may have contributed…

His heart is “two sizes too small”. It was “… a dead tomato splotched with moldy purple spots”. He may have suffered from rare cardiac disorders in which the myocardial chambers may be smaller, underdeveloped, or missing a valve. The discoloration is likely due to multiple resultant heart attacks.

In Hypoplastic Left Heart Syndrome, babies seem normal at birth but develop difficulty breathing and feeding due to inadequate blood circulation. This heart defect is usually fatal unless it’s treated, but maybe the Grinch had just enough reserve, or a persistently patent ductus arteriosis, to stay alive.

Dr. Seuss informs us later, though, that when the Grinch returned the Whos’ gifts, his heart, “grew three sizes that day”. In medicine, an enlarged heart is termed cardiomegaly and is also a sign of heart failure, especially if it occurred rapidly.

Cardiomegaly afflicts nearly 6 million US adults, although only snakes (Burmese pythons) are known for having hearts that shrink and grow throughout a single day. In cardiomegaly, the enlarged heart doesn’t work as well. Furthermore, his heart may also have been “… full of unwashed socks”. This small heart, already inadequately pumping a diminished cardiac output, would have been backed up even further by the dirty garments. 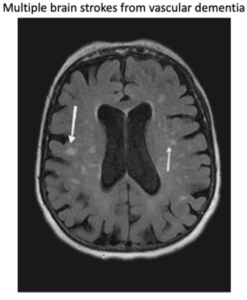 Longstanding impaired heart function would chronically diminish blood flow to the brain, leading to vascular dementia. He may have suffered “mini-strokes” leading to cognitive decline and depression. Several studies have implicated increased aggressive behaviors in some dementia patients compared with the normal population, especially if the bilateral frontal lobes were disproportionately burdened with infarcts.

His, “brain is full of spiders”. This likely refers to one of the coverings of the brain, called the “arachnoid” layer. Arachne is Greek for “spider”. Just under the thickest layer, called the dura, is the delicate arachnoid which contains the brain fluid. There are silky fibers of the arachnoid extending to the brain and giving the appearance of a “spider”. Problems with the arachnoid layerin the Grinch’s brain may have led to the development of an “arachnoid cyst”. Most arachnoid cysts do not cause symptoms at all, but the cyst location and size could lead to brain compression, intractable headaches, nausea, or behavior changes. A large, symptomatic, and untreated arachnoid cyst may cause

enough brain dysfunction to incite the Grinch’s Whoville chaos. There’s a scene symbolically showing Cindy Lou Who holding a holiday fruit, superimposed over the Grinch’s eye. This figuratively represents a dilated Grinch pupil, with brain herniation syndrome, as he angrily vents about the Whos. What a great neuropathology lesson… Dr. Seuss!!!

“Your soul is an appalling dump heap. Overflowing with the most disgraceful assortment of deplorable rubbish imaginable”. Descartes’ philosophy was that the pineal gland in the brain was the location of the soul and the

place in which all our thoughts are formed. Since the 16th century, we’ve realized the pineal’s main byproduct is melatonin, a hormone important in regulating the sleep-wake cycle. Individuals with psychotic disorders seem to have significantly decreased melatonin production, usually associated with sleep disorders. MRI studies indicated smaller pineal glands in them compared to healthy individuals. Therefore the Grinch’s small and malfunctioning pineal gland may have contributed to maladaptive attributes, including profound sleep deprivation, making him unable to interact normally with the Whos or understand their Christmas holiday. How would you react to a loud yearly Whoville party if you were chronically tired? 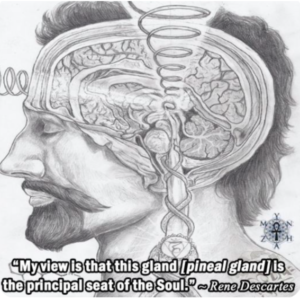 It’s pretty apparent that the Grinch likely had spine problems.

In certain positions, the Grinch was overly kyphotic with a forward head posture. This would lead to tremendous neck and back pain. Not having access to the Whoville neurosurgeon, this untreated ailment fueled disdain for the Whos, who had excellent spine care. In a jealous rage, he may have wreaked havoc on them.

Overall, numerous psychologic, brain, and spine conditions likely plagued the Grinch. It seems there was ample reason for the poor relationship with the Whos. However, upon being accepted by them on Christmas day, he would have access to mental health services and the Whoville neurosurgeon to address his mini-strokes, arachnoid cyst, pineal gland, and spine. All of these ailments could be treated to prevent future Whoville holiday blunders.

At the end of Dr. Seuss’s story, we are left with an image of the Grinch seemingly carving the roast beast with a table of Whos. However, the scene is eerily familiar to a neurosurgeon operating with his surgical staff??? The allegory Dr. Seuss created here, of how neurosurgery could save the Grinch and Christmas, is just uncanny… or is it just me?