Many of us watching Monday Night Football, Raiders versus the Broncos, saw the concerning injury to Raider’s cornerback Gareon Conley. While attempting to tackle Bronco’s Royce Freeman, the Raider’s safety, Abram, caught the top of Conley’s helmet with his leg, producing sudden axial compression and flexion.

One of the most dangerous compression/ flexion injuries to the cervical spine can be a “tear drop” fracture in which the C5 vertebra can compression and displace back into the spinal cord causing a spinal cord injury. The most frequent cause of this fracture is diving accidents.

Conley was taken off the field on a stretcher. According to reports, he was released from the hospital. Luckily, it does not appear Conley suffered any fracture, nerve injury, or serious impairment. 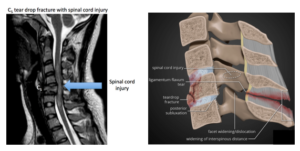 A recent study in the journal, Spine, from June 2019 assessed the epidemiology of cervical injuries in NCAA football players. Between the 2009/2010 and 2013/2014 collegiate seasons, 7,496 cervical spine injuries were identified. By far, the most common type of injury was a “stinger”, which is a sharp pain down the arms or legs but usually resolves quickly without any structural problem. The next most frequent was muscle “strains”. More than 90% resulted from direct contact, and most occurred in linebackers during games. About 65% of the athletes returned to play within 24 hours, and only about 3% were out longer than 21 days. More severe injuries were rare, with disc herniation or fracture only occurring about 2% of the time. None of these severe injuries required surgery.

The promotion of safer tackling techniques, improvements in protective gear (that’s why they’re on your case, Antonio Brown), and preventive neck strengthening are key factors in keeping the rates low.