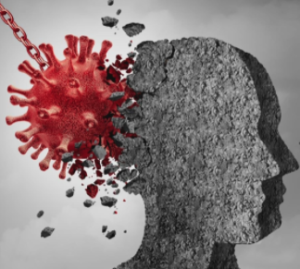 Have you ever seen the movie Joe Versus the Volcano? The 1990 comedy, at the infancy of Tom Hanks and Meg Ryan’s dynamic duo-ship, was about the hypochondriac Joe Banks and his dreary lackluster life. He sees a quack doctor, Dr. Ellison, who diagnoses him with a, “Brain Cloud”.

What is a “Brain Cloud” you may ask? It’s not cancer. According to Dr. Ellison, it actually has no symptoms,“It’s a black fog of tissue running right down the center of your brain. It’s very rare. It will spread at a regular rate. It’s very destructive. It’s incurable…. It’s not painful. Your brain will simply fail, followed abruptly by your body. You can depend on at least 4 ½ to 5 months of perfect health… That’s the ironic part. There’s nothing wrong with you that has anything to do with your symptoms…”

With the terminal diagnosis, Joe is confronted with the option of jumping into a volcano on the remote Pacific island of Waponi Woo. According to legend, the “Big Woo” will erupt every 100 years, destroying the islanders, unless appeased by a human sacrifice. As none of the locals have the valor, Joe can emend his listless existence and die an honorable death for the Waponis. Having otherwise worked the last 5 years at a rectal probe company, accruing no promotional potential and feeling chronically sick, he accepts the opportunity for redemption. However as he travels to the island, sailing the majestic sea and interacting with the sensual Meg Ryan and the exotic Waponi culture, he finds new meaning in life.

Yet the timing is poor and he is a man of his word, so he and Meg Ryan still nobly jump into the volcano’s throat. But wait… just as they leap into the plunge, a steam vent serendipitously expels them out and into the ocean. They are saved, while the Waponis succumb to their island imploding into the ocean depths. It is then that Joe realizes Dr. Ellison was a charlatan all along and nothing was ever wrong with him. He should have considered a second opinion for his “Brain Cloud” condemnation, and simply needed to escape the tedium of his work’s confinement.

Recently COVID-19 has been associated with a neurologic condition, called “Brain Fog”. We are told that some people infected with SARS-CoV-2 can develop poor sleep, feelings of loneliness, depression, increased stress or anxiety, dietary changes, lack of mental clarity, poor concentration, headaches, and confusion. Basically, it is suggested that suffering COVID-19 can induce the same non-specific neurologic symptoms as working in the basement of a dingy surgical tool company, under soul-sucking zombiesque fluorescent lighting. Is Joe Versus the Volcano’s “Brain Cloud”, COVID-19’s “Brain Fog”???

As we’ve discussed in prior blogs, encephalopathy or cerebral inflammation from COVID-19 may be rarer than advertised. The pathophysiology is still poorly understood. However we know more affirmatively that rates of depression and cognitive decline are directly associated with landlocked social isolation.

The vaccine is here. Whether appropriate or not, most everyone is wearing a mask. We are social distanced. At this point, we need to get out of our homes and start interacting with others in person… going to restaurants, museums, and sporting events… and our kids need to go to school.

Maybe, like Joe Banks, we Americans should get a second opinion on our “Brain Fog”, and exit our shells.

References
This idea for this blog was provided by Phil Smith, even in his ripe old age