Caution with a Cranioplasty

“So over at the VA, they had to replace it with plastic.  It ain’t as strong, so I don’t know if I oughta go sailin’ down no hill with nothin’ between the ground and my brains but a piece of government plastic”

For some neurological conditions, including infection, tumor or trauma, part of the skull needs to be removed and left off.  This is called a “craniectomy”. Following treatment of the underlying condition, “cranioplasty” is a procedure in which either the patient’s own bone (autologous cranioplasty), titanium mesh (mesh cranioplasty), methylmethacrylate cement, or a customized piece of plastic polymer (synthetic cranioplasty) is reattached to the gap in the skull.  If nothing replaces the skull defect, the brain may be at risk of injury or the patient could develop headaches or neurologic problems. Studies have shown neurocognition can improve after cranioplasty. Cranioplasty is both functional and cosmetic.

The history of cranioplasty is as old as trephination.  There is evidence that Incan surgeons performed cranioplasty using precious metals and gourds.  One Peruvian skull dating back to 2000 BC was found to have a left frontal defect covered with a 1-mm-thick gold plate.

Images were taken from Shah A et al. Materials used in cranioplasty: a history and analysis. Neurosurg Focus 36(4), 2014

Of course, the material used for cranioplasty was originally contingent upon the patient’s socioeconomic status.  (Copper and silver metals intrinsically also have a known antiseptic effect and likely played a role in preventing infection.)  Precious metals were likely used for nobility and gourds for the common citizen. It is hard to imagine the durability of a gourd, with it being a degradable material in contact with living tissue.  In more civilized and later societies, an Italian anatomist named Gabriel Fallopius may have been the first to document the purpose of cranioplasty in the 16th century.  The bone would need to be placed in cranial fractures if the covering of the brain was not damaged.  But if the dura was damaged, a gold plate would need to be used, since the metal may create a more inflammatory reaction to close the dura too.  In 1668, canine bone was used in a Russian man. Warfare in the 20th century instigated the need to find new and cheaper materials, such as modern plastics, to fill large cranial defects. 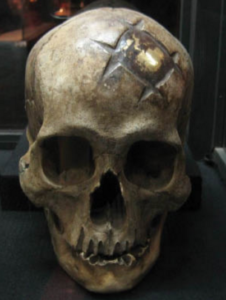 Although many different methods for cranioplasty have been described, there is still no consensus on which method is better.  It may appear that the patient’s own bone is best because of its strength, low risk of infection or rejection, and its ability to incorporate into the adjacent skull.  Synthetic options may be unavoidable if the patient’s own bone cannot be used. Especially in the setting of titanium mesh or a synthetic plastic implant, there may be a concern that the implant could be damaged or dislodged because ingrowth with the surrounding bone rarely occurs.

Studies directly assessing the risk of cranioplasty breakage have not been performed, although we no longer use ceramics due to their known rate of shatter.  However, at RMBSI, we strongly urge patient’s who have undergone cranioplasty, either with their own bone or a synthetic material, to be very cautious. We do not recommend these patients play any contact sports.  They need to be judicious in wearing protective helmets during risky activities and avoid excessive touching of the area. If there is any visible cosmetic change, they need to seek medical care in case the implant has moved.  It’s a much more concerning prognosis than, “… my hair just ain’t gonna look right…”. The dislodged implant could damage their brains.