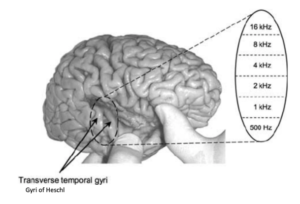 It would appear that evolutionarily, music became something we did spontaneously. Our ancestors, with very limited language, appreciated music. One of the differences between the developed brains of Homo sapiens and those of the great apes is the increase in area allocated to processing auditory information… the temporal lobe. This basic function may be a key separator of higher-order species.

The neural networks involved in music have long been known. Listening to music in relation to the emotional experience is processed mainly in the right hemisphere, which is non-dominant for most. Lesions here can lead to impairments in appreciation of pitch, timbre, and rhythm. However, trained musicians seem to have a symmetrical distribution of music dominance between both hemispheres. Patients with left temporal lobe epilepsy show significantly lower scores in melody recognition, while those with right temporal lobe epilepsy showed impaired identification of emotion in music. Prodigies have been found to have particular brain changes not observed in normal individuals. Adult instrumental musicians seem to have more gray matter in somatosensory, premotor, superior parietal, and inferior temporal areas. They may also have a larger cerebellum, potentially related to its role in motor and cognitive skill learning. But most notably, the degree of musical achievement in world-famous musicians correlates with more gray matter volume in Heschl’s gyrus of the temporal lobe, which is the area of auditory cortex linked to pitch discrimination and detecting tonal patterns.

Of eerily coincidence, pathologies of the temporal lobe have been associated with musicians. Two particularly famous musicians clearly had advanced temporal lobe cytoarchitecture but developed “uncinate fits”, or temporal lobe seizures. They possibly could have avoided their young demise from early neurosurgical treatment involving their temporal lobes. 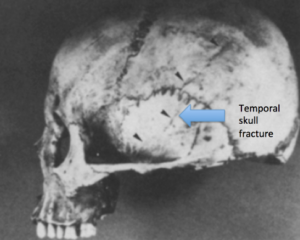 Musician #1
Born in Salzburg, Austria on January 27, 1756, this composer showed prodigious ability from early childhood. He composed at the age of five and performed before European royalty. During his final years of life, in Vienna, he composed his best-known symphonies, concertos, and operas. His Requiem was largely unfinished at the time of his death at age 35, from an acute and mysterious illness, which for years was diagnosed as rheumatic fever or poisoning by a jealous and betraying Judas.

In 1791 at the age of 33, this composer began to complain of intermittent headaches. and vomiting. He started living with his head encircled by bandages. Weeks before his death, he was unsuccessfully trying to complete his Requiem, which was odd since composing had never been a difficult task. Just fifteen days before the end, he experienced severe headaches, went into epileptic convulsions and the right side of his body temporarily became paralyzed. He soon lapsed into a coma and died.

The skull was robbed by grave-diggers in 1842 and later examined in the 1900s. 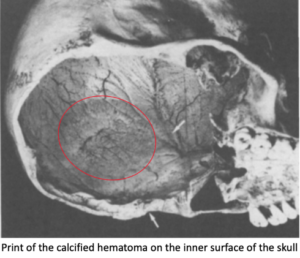 Seen on this skull is a 10 centimeter left temporoparietal skull fracture with early signs of healing. The inner side of the bones seemingly showed a calcified hematoma, roughly measuring 45 centimeters.

Chronic subdural hematomas are one of the most frequent types of post-traumatic disease, but most often occurs in the elderly. This musician was only 35 years old at his untimely death. Epidural hematoma, on the other hand, can occur after trauma and in young individuals. However deadly epidural hematomas usually are caused by rupture of a particular artery, the middle meningeal artery, and lead to significant illness within hours. This composer’s decline occurred over about 2 weeks. Less commonly, epidural hematomas can also occur from ruptured veins, leading to slow formation of pressure and eventual calcification. This situation could explain a progressive headache over a year. With large enough size, an epidural hematoma can herniate the temporal lobe into the brainstem leading to death. 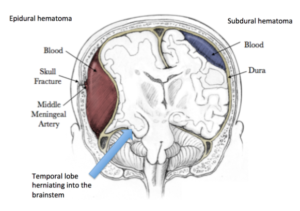 Today, neurosurgical diseases like a calcified epidural hematoma can easily be diagnosed, and if quickly treated, patients can completely recover. Unfortunately for this musician in the 1700s, it would have been impossible to make this diagnosis early.

Who knows what additional masterful works we could have appreciated if Wolfgang Amadeus Mozart had survived?

Musician #2
Born September 26, 1898, in Brooklyn, this American composer began playing piano at age 11. He dropped out of school and played professionally at age 15, soon to be one of the most sought after musicians in American jazz, opera, and popular songs for stage and screen. In 1924 he was asked to create a jazz number to heighten the genre’s respectability. He completely forgot about the request until he read a newspaper article announcing the feat, leading to a franticly written composition which became his best-known work.

Also in the 1920s, this composer started experiencing attacks of nausea for which he sought numerous physicians without relief. Until 1936, he had always been extroverted, however after, he acutely became isolated, lonely, and irritable. By 1937, while playing with the Los Angeles Philharmonic Orchestra, he experienced an absence seizure in which he remained upright without spasmodic jerks, but missed several bars of the song and stared into space. Afterward, he recalled that just prior to the “episode”, he smelled “burnt rubber”. Three months later he had repeated olfactory auras with unconsciousness. Unfortunately, his doctors couldn’t make the diagnosis. 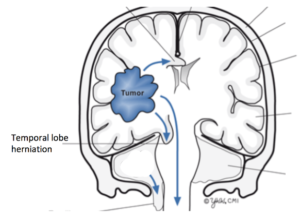 Profound headaches and mental status changes plagued the musician until July 9th, 1937, when he was found unarousable by his brother. On arrival at a hospital, he was left hemiparetic and comatose with signs of elevated intracranial pressure. Desperately, failed attempts were made to reach the most famous neurosurgeon in the United States, Dr. Walter Dandy. Another well-known neurosurgeon, Dr. Howard Nafziger arrived and took him to surgery, which concluded just past midnight. Tragically, the maestro never regained consciousness and died July 11, 1937, at age 38. The man who had more notes in his head than he could write down in a hundred years died of a large cystic glioma.

Temporal lobe tumors can irritate the brain and cause seizures, which commonly may be preceded with the sensation of abnormal smells. Nausea is another known aura. At the time, intracranial masses could only be formally diagnosed by ventriculography (pneumoencephalogram), which was a painful and feared procedure. In 2020, MRIs are frequently performed and can potentially diagnose temporal lobe tumors early. Considering George Gershwin had a right (non-dominant) temporal mass, surgery may not have cured him, but resection may have given him time to create Rhapsody in Blue No. 2, No. 3. No. 4 and No. 5… in the likeness of Beethoven.

Who would have predicted that the rise and fall of two of the world’s most prolific musicians involved their temporal lobes?