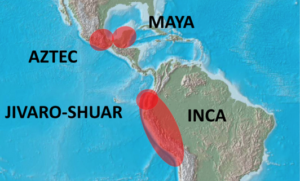 Our country historically has celebrated Columbus Day due to Christopher Columbus’s westward travels, hitting land on October 12, 1492. Of course Columbus arrived in Guanahani in the archipelago of the Bahamas, but the indigenous people gave him the impression he arrived in India. We are named America, likely because Columbus never actually made it this far, but Amerigo Vespucci landed on behalf of the Portuguese in Brazil in ~1502. It was South America that took his name first, but “America” later extended north to our continent. More recently our country has recognized that both explorers really were just invaders of Mayan, Incan and Aztec empires, all of which were very civilized with political and social structure comparable to developed European nations of that time. Many Americans now celebrate October 14th at Indigenous People’s Day. 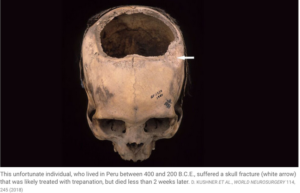 Aztec medicine men were very aware of head injuries, as evidenced by remains at archeological sites. Injured warrior heads seem to show wounds sutured with human hair. The Aztecs also seemed to understand some aspects of spinal cord injury. Texts mention “men with cripple hands” after trauma to the upper spinal levels, who were not treated due to an understood poor prognosis. Battle weapons of Mesoamerica included helmets.

Three main cranial procedures were performed by the Incas, including cranial trephination, artificial cranial deformation (ACD) and head shrinking. We’ve already discussed trephination and ACD in prior blogs, and soon we will mention head shrinking in an upcoming one… stay tuned.

Trephination surgery (early craniotomy) was performed seemingly for trauma, fractures, seizures, headaches, mental disease, and some rituals. It appears the Incas would use alcohol, “chichi”, from fermented maize and coca leaves to initially hypnotize the patient. Cocaine is derived from the same coca plant. A stone knife, but also bone elevators, were dedicated surgical instruments. Surprisingly, trephination was likely performed without antibiotics (Alexander Fleming didn’t discover penicillin until 1928- but Penicillium mold is found everywhere in the world and the Incas were known to exploit the medicinal properties of wild plants).

One may think that drilling a hole in the skull, outside in the open elements, may be a death sentence. Not every patient lived, but hundreds of subjects’ skulls have been found indicating survival. The cumulative success rate has been estimated to be about 80% during the Inca era, compared to less than 50% during the American civil war. How could scientists possibly know this, you may ask? If the bone around the hole showed no signs of healing, then we can assume the patient died. However smooth bone around the opening would indicate the patient survived at least for a few months after the procedure. 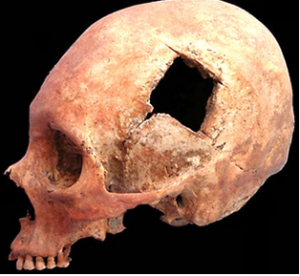 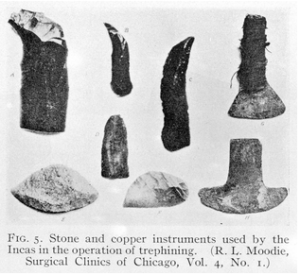 And what’s even more interesting is that the Incas seemed to study their procedure and outcomes, because they improved over time. The earliest 59 skulls from Peru’s southern coast spanning 400 B.C.E to 200 B.C.E showed about 40% survival. The next group, about 421 skulls from Peru’s highlands from 1000 C.E to 1400 C.E., showed about 53% survival. But the 160 skulls from the capital of the Inca Empire, from 1400 C.E to the mid-1500s C.E, had a 75-83% survival. Over time, smaller holes were used… these guys were “minimally invasive”??? Less cutting/ drilling and more “grooving” was later used to reduce the chance of puncturing the brain. There even has been one skull identified which underwent up to 5 different procedures. This is just like modern medicine. Improved technique, studied over time, and centralized in urban cities, tends of offer the best medical outcomes.

Trephination was not “one size fits all”. At least four different trephination techniques have been discovered: 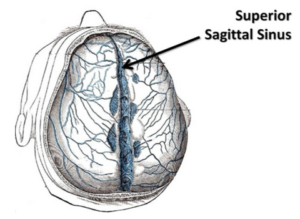 Intentional artificial cranial deformation was common in Mesoamerican cultures. This was discussed in a recent blog. However in much more modern times, craniosynostosis correction was initially opposed by the Catholic church because its origins were considered a pagan practice. 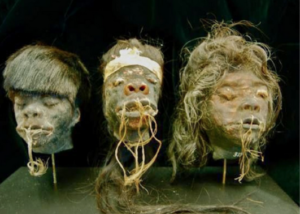 Lastly, shrinking of human heads was performed by the Jivoaron tribes of Ecuador and Peru. There’s no real ancestral link of this to modern neurosurgery… we don’t “shrink” peoples heads, at least in the operating room. In the practice of war, the Jivoaron opponent’s head was decapitated, the skull and intracranial contents were discarded, and the skin was shrunk. These shrunken heads were saved for about a year to ward off evil spirits and prevent a vengeful soul’s return, but then the heads were discarded or given to children as toys.

In summary, Mesoamerican cultures had a lasting impact on the Europeans, and specifically neurosurgery. They were far advanced in techniques and some procedures we use today. The first neuroanatomy text published in English did not arise until Humphrey Ridley’s text in 1695, hundreds of year after the pre-Columbian Peruvians were recording on quipus. The first neurosurgery text was written by Dr. Moses Allen Starr in 1893, describing some procedures already well-known by the Mesoamerican neurosurgeons we celebrate on October 14th.