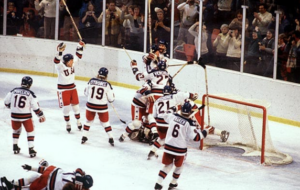 As a spine surgeon, I have been rhetorically asked by patients with chronic spine pain, “Can you just remove my spine?”  Of course, the answer is “no”, we don’t do “spine-ectomies”. Even though 90% of animals don’t have one, the backbone is one of the most important evolutionary innovations in the history of life.  Vertebrates (have a backbone) are large, charismatic animals that walk, swim, fly and usually maintain higher cognitive function. All mammals are vertebrates. Invertebrates (no backbone) are simple creatures that either spread parasitic infections or serve as food for, vertebrates.

This weekend, on February 22nd, we celebrated the 40th anniversary of the Miracle on Ice.  It immortalized the amalgamated group of various amateur US college hockey players beating the tenured world-best Russians in the 1980 Olympic semifinal game (The US beat Finland 2 days later for the gold medal).  The famous line from coach Herb Brooks’ pregame speech was, “If we played ‘em 10 times, they might win nine”. And realistically, if Vegas allowed Olympic betting back then, the odds would have been around 10-1 for the Americans.

The 1980 Soviet Union squad was history’s greatest international hockey team.  Just a year earlier, in February 1979, the same Red Army team beat the NHL All-Start team, who featured 20 future Hall of Famers, 6-0.  Just 2 weeks before the Lake Placid stunning miracle, the Russians demolished the US in a 10-3 win at Madison Square Garden. So, the defeat in February 1980 wasn’t just a blot for the Soviets, whose roster hadn’t changed in 10 years.  It was the largest stain in the 24-year run of Soviet domination in Olympic ice hockey between 1964 and 1988. 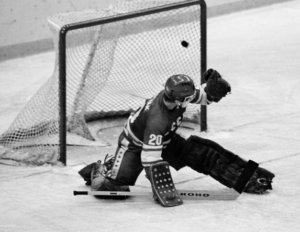 The Soviets had the all-star Kharlamov-Petrov-Mikhailov line, but their hockey dynasty was based on their goaltender, Vladislav Tretiak, who was the world’s best.  Tretiak was the first player born and trained outside of North America to be inducted into the Hockey Hall of Fame. His career Soviet League statistics are not available for public view, however, he ended up winning 2 Olympic gold medals, 10 IIHF World Championships and 9 IIHF European Championships.  He was the first Soviet player drafted into the NHL. For goodness sake, he’s the only player Wayne Gretzky has ever invited to his penthouse to play table hockey… He is now the head of the Russian Ice Hockey Federation. Tretiak may be the best hockey goalie to ever play the game. Considering hockey is a sport reliant on the good goaltending, Tretiak was the backbone of the Soviet team.  When a hockey goalie gets beat, the whole team gets beat. And without a backbone, in hockey or human form, the entire structure collapses to the ground.

The story of the February 22, 1980 win, maybe less about the US’s miraculous play that day, and more about the Soviet’s shocking removal Tretiak at the end of the 1st period.  The question of why the best goalie to ever play the game, was yanked from the Miracle game, may never be fully understood.  After all, Tretiak was quoted:

The Soviet coach, Viktor Tikhonov, maybe didn’t agree with this quip.  After being disgusted that the Americans tied it 2-2 off a bad Tretiak rebound, with one second remaining in the 1st period, Tikhonov replaced Tretiak with back-up tendy Myshkin.  While Myshkin carried the Soviets into the 3rd period with a 3-2 lead, the Americans prevailed with a 4-3 win.

Later in life, Tikhonov admitted that pulling Tretiak in that game was the biggest mistake of his career.  It appears the other players weren’t pleased either, as workers reportedly found 121 empty vodka bottles in the drop ceiling of the Soviets rooms when they cleaned up the Olympic Village.

In neurosurgery, we don’t remove patients’ backbones.  In hockey, the world has learned you don’t remove your team’s backbone either.  Neither the Russians nor Americans will forget or understand the day the Soviets metaphorically invertebrated themselves, abruptly dropping their taxonomic class for a few hours in Lake Placid.