In ice hockey, players like Patrick Kane are thought to have “good hands”. Filthy moves… dekes and dangles that defy all three of Newton’s laws.

For anyone who wants to debate who has the best stickhandling in the NHL, I recommend they watch this YouTube video from a few years back.

Even at the professional level, these types of players can make other NHLers look like complete benders. Here is another video to check out!

But what makes an elite athlete like Patrick Kane so special?  It may not start in his hands at all…

Image is taken from: Wei G et al. Increased cortical thickness in sports experts: a comparison of diving players with the controls. Plos ONE. 2011

High-level athletes have increased cortical thickness in a few areas of the brain, such as the left superior temporal gyrus and right orbitofrontal cortex, which plays a particular role in socially relevant stimuli and biologic motion perception.  Sports experts’ brains are quite different from those of the general population. And this is not to be confused with eye-hand coordination… that’s a completely different process in the parieto-occipital junction.

Biologic motion perception involves the visual system’s capacity to recognize complex human actions.  It allows extraordinary athletes to avoid collisions and anticipate opponents’ movements. It’s not just that they’re able to make quicker decisions or have more acute reflexes and muscle control (they have that too)… they’re able to gather and process more visual data, and make sense of it.

A great hockey player knows where the puck is coming from, where the defensemen are going, how much time he has, where the goalie is positioned… all at the same time… yesterday. 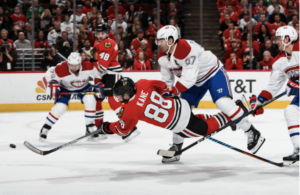 Previous studies of brain function have indicated that extensive training, such as meditation practice, language learning, or career experience can induce neuroplasticity (changes in brain structure with repetition) in normal people’s brains.  Even the average schmo can get better at some things with enough practice. Older research suggests that expertise in most domains can be acquired after a minimum of 10,000 hours of concentrated rehearsal. However, in this example of elite athletes, there does not appear to be a correlation between training duration and these specific brain changes.  What does that suggest? Work as hard as you want, Mr. Weekend Warrior… you still have no legitimate chance of making “the show”… These players are simply born with it. Ability can be taught, but skill cannot.

The mystery of “hockey hands” starts and ends in the brain, so our hockey vernacular should change.  Scouts now recognize this and 3-dimensional multiple-object-tracking speed can be quantified and is used in the NHL combines for entry drafts.