Who Would Have Thought This Was Possible? 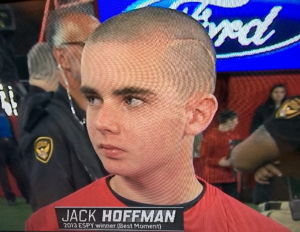 In 2011, 5-year-old Jack had a seizure and was found to have a glioma, a type of brain tumor.  The majority of pediatric gliomas present as benign, slow-growing tumors, which are fundamentally different from adult tumors.  Luckily, unlike adult tumors, they rarely undergo malignant transformation to aggressive cancer, and show excellent survival under current treatment strategies.  However seizures can be common and debilitating.  It appears that surgical removal of as much tumor as possible is ideal.  Pediatric aggressive and cancerous gliomas also exist, which can be lethal within months.

In May 2011, Jack underwent surgery for his tumor, but only a small portion could be removed.  Pathology reportedly showed it was cancerous.  In October 2011, he underwent a 2nd surgery, where more than 90% of the tumor was removed, stopping the seizures.

Between brain surgeries, Jack met his favorite Nebraska football player, Rex Burkhead.  The two kept in touch and Burkhead called Jack before his 2nd surgery.  The next day, Nebraska played Ohio State in a nationally televised game and Jack’s story was mentioned by announcers.

In April 2013, the Nebraska Cornhuskers celebrated, then 7-year-old, Jack Hoffman as he suited up and ran a 69-yard touchdown wearing Burkhead’s number 22.  At that point, he was 2 years into treatment and undergoing chemotherapy.

The Team Jack Foundation was formed, raising millions of dollars for pediatric brain cancer research.  He won an ESPY award in 2013 for “Best Moment”.  He met Barack Obama in the Oval Office.

Jack is now 13 years old in 8th grade.  He sill has seizures requiring about 21 pills per day.  However recent imaging reportedly revealed that the tumor is stable.  He’s currently undergoing another clinical trial. 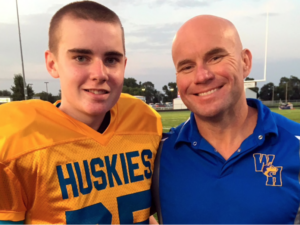 The only thing more amazing than Jack’s survival story is his perseverance to pursue his dreams against all odds.  Not only does he play middle school basketball, baseball and runs track, but he also plays center on his football team.  Now, many of Jack’s physicians have advised against this, and we at Rocky Mountain Brain & Spine Institute do not recommend football to brain tumor patients.  Especially at the center position, helmet-to-helmet contact is risky for someone who has undergone a craniotomy, with a current brain tumor, and who still experiences seizures.  Jack has experienced seizures while playing other sports.  And although it’s a different type of brain condition, a 17-year-old high school football player suffered a life-ending brain hemorrhage from an arteriovenous malformation rupture during a football game just last week in Florida.  Jacquez Welch was involved in a group tackle but never stood back up.  However we applaud Jack for his indelible courage and living life to its fullest.  Having a condition where about 20% of children don’t survive, I guess you might as well get out there and snap that ball.

Jack’s hero, Rex Burkhead, is currently a 5’10’ running back for the New England Patriots.  Jack Hoffman is a 5’8’’ center, who likely dreams of snapping the wildcat in Foxborough someday.