Why Are My Screws Loose? 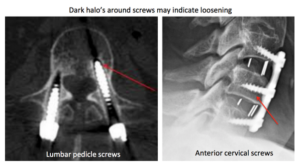 Spinal fusion often involves placing metal screws with rods or plates to immobilize bones and allow them to “fuse”, or grow together.

I always tell my patients that fusion is a two-part process. The first part is the actual surgery, in which the nerves are decompressed and then the metal implants are placed. However, the actual “fusion” does not occur for at least the next 6-12 months, which is the second part. This is why I often limit my patient’s activities and often apply braces.

In my practice, I often order a CT scan around 3 months to verify the instrumentation is not loose and there are early signs of bone growth (fusion). I do not expect complete fusion at this point, but the scan gives a good idea if the fusion process is progressing. If after 6-12 months a patient continues to have or experience new pain, more imaging may be pursued. If there is loosening around the screws, it could imply different things. Loosening of the screws does not necessarily mean fusion will not eventually occur, or those symptoms are due to the loose screws. However, it could indicate failed fusion or pseudoarthrosis.

Anecdotally, I have wondered if some loose screws occurred due to persistent “wobbling” of the screw in the bone. I consider the analogy of a screw placed in a wall. Even if the screw is in a wall stud, it could get loose if someone daily “wobbled” the screw.

A recent article has potentially identified a novel hypothesis… bacteria.

A few hundred screws were analyzed after being removed in revision surgeries. The screws were carefully studied, using a process called sonication, which assessed if small amounts of subtle non-aggressive bacteria were present. In patients who showed no screw loosening on imaging, none showed signs of bacteria on the screws. In patients with screw loosening, about 41% had some non-aggressive bacteria. This study may indicate that some screw loosening is associated with subtle bacteria contaminating the screws. It should be noted that this does not indicate these patients had any infection… the patients studied did not show any infection whatsoever. It simply suggests that some of the metal implants cannot be completely sterile. This may suggest that spine screws could prophylactically be coated with antibiotic material prior to implantation, to help aid in fusion and surgical success.